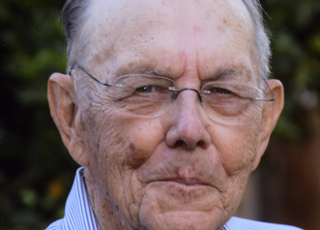 The family will receive friends from 5 until 7 p.m. Tuesday, Dec. 22, 2015 at Rose-Neath Funeral Home in Minden. A memorial service to honor him will be at 2 p.m., Wednesday, Dec. 23, 2015 at Taylor Baptist Church in Taylor with visitation beginning at 1 p.m. The service will be led by the Rev. Jimmy Eppinette, William’s long time pastor and friend, and the eulogy will be presented by his grandson, the Rev. Weston Brown.

William was born in Mena, Arkansas on March 9, 1922, the youngest child of Thomas Archie and Fannie Darby Still. The family moved first to Farmerville when William was a baby, and then to Taylor when he was 11 years old. He called Taylor “home” for 82 years, surrounded by all that he cherished—his family, his church, and his friends.

William’s devotion to his family and his firm belief in Jesus Christ supported him throughout his life. He led by example, and lived his life believing that a man is only as good as his word. Never one to be shy about voicing his opinion, he will be fondly remembered by his family and friends for his words of wisdom and humorous retorts.

Growing up during the depression taught William the value of hard work and earning an honest dollar to provide for his family. His first job was walking a cow to pasture for 5 cents a day. His career was spent with Woodard-Walker Lumber Company, first as Manager of the saw-mill commissary, and finally as President of the company’s real-estate division, Taylor Development Company. He loved buying and selling, and thrived on “making a deal.” His spirit of hard work never waivered, even when his body grew tired.

William was always willing to help those in need by helping to provide a means for them to help themselves. He never craved worldly possessions, but he did enjoy buying and selling cows, and owning a keen bird dog, a good horse, and a donkey or two along the way. His passion was the land. While he relished making a deal for a tract of land, he was always quick to remind his family that “men don’t own the land; it is owned by God. We are only here to mind it for a little while.”

William is survived by his devoted children and their spouses, Gordon and Yvonne Still of Taylor, Andrea and Claud Walker of Taylor, and Nelwyn and Ken Warren of Minden, LA. Also honoring him are grandchildren Chad and Mandi Still, Brian and Barbara Still, Judd and April Walker, Todd Walker, Stefanie Walker, Adam and Rebecca Walker, Graham and Suzannah Walker, Claire and Dave Mansour, Weston and Lindsay Brown, Anderson Brown, Hodson Brown and fiancé Katie Holmes, and Tiphanie and Dustin Sumrall, along with 25 great-grandchildren.

Preceding William in death was his wife and love of his life, Nellie McCoy Still. He was also preceded by his parents and his siblings James Still, Robert Still, Thomas Still, Martha Still Powell and Mary Jo Still Galliher.

The family would like to thank his exceptional caregivers for their loving compassion during the last year and a half of his life-Margie Seamster, Tracy Dewhart, Annette Abney, Bonnie Critton, Lesia Key, and Sharon Walker. Also, thank you to Nathaniel Jacobs for his friendship and help on the farm.