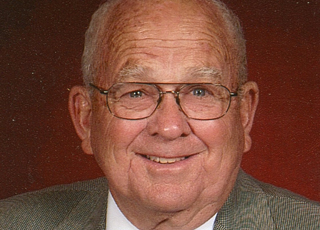 Funeral services for Mr. Alfred William McKenzie, age 84, were at 3:30 p.m. Sunday, Nov. 15, 2015 at Central Baptist Church with the Rev. Phillip Casper officiating. Burial was in the Slack Memorial Cemetery under the direction of Bailey Funeral Home in Springhill.

Visitation was from 5 until 8 p.m., Saturday at Bailey Funeral Home.

Mr. McKenzie was born on June 12, 1931 to James Samuel and Flossie Leona Hight McKenzie in Norphlet, Arkansas and passed away Friday, Nov. 13, 2015 in Bossier City. He was a longtime resident of this area and was a faithful member of Central Baptist Church for 52 years. He was a member of the Adult VI Sunday School Department, an usher and on Monday mornings, he was at the church to count the offerings received. He was a retired switcher for Placid and Hunt Oil Company with 35 years service. He enjoyed hunting and fishing and loved his children and grandchildren.
He is survived by his beloved wife of 61 years, Patsy Ann Slack McKenzie; two daughters, Amanda Martin and husband, Ned of Las Vegas; Melanie Coile and husband, Kenneth of Springhill; granddaughter, Emily Ann Martin and grandson, Edward William Martin; brothers, James McKenzie and wife, Neita of Minden and Arnold McKenzie of Cotton Valley.

Mr. McKenzie was preceded in death by his parents.