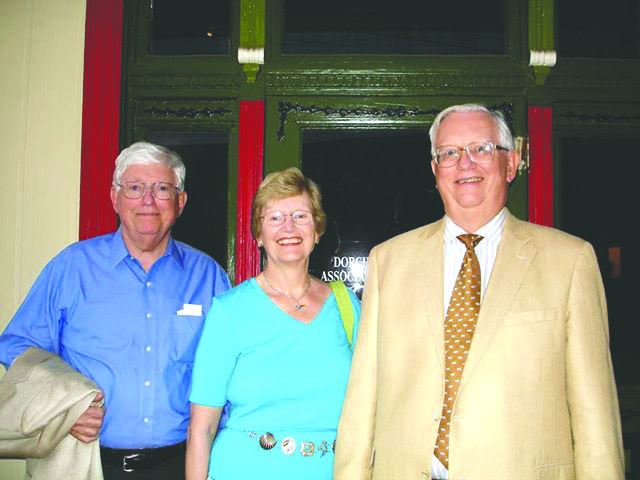 Editor’s Note: We asked Webster Parish Historian John Agan to share this tribute to Minden resident and philanthropist Thad Andress, who passed away this week.

Tuesday night, I lost a friend and encourager, but so did the city of Minden with the death of Thad Andress. For me, Thad was always like a member of the extended family.

My father went to work for Thad’s father, Harry, at Andress Motors in 1936, when Daddy was 18. My mother, went to work for Mr. Andress in 1940, when she was 17. Thad was a little boy when they joined the business family and they watched as Thad his brother Miller and his sister Joan grew up.

In 1948, when my parents married, Harry Andress gave away my mother at the wedding as my grandfather had died when she was three in 1926. So, the Andresses were always a part of my life. However, if you lived in Minden, they were also a part of yours.

Preparing for this article, I did a search of the online archives of the Minden newspapers. Between 1932 and 2016 Thad’s name alone – not including the mentions of his family including his father’s years of service in business and government – appeared in 920 separate editions of the local newspaper. If you kept up with what was happening in Minden, and who was helping things happen, you knew the name.

Thad was born in Minden in 1932 as a descendant of a pioneer Minden family. His great grandfather, Christopher Chaffe, immigrated to Minden in 1853 from his native England to join his brother John Chaffe who had come to Minden earlier.

Chris was a blacksmith and a very good one, but soon his activities expanded into all areas and he became one of the community leaders of Minden.

Among other enterprises he operated the stagecoach line that ran across North Louisiana and had the mail contract for delivery to most of that territory. He touched all areas of local life. In fact, Carleton Prothro used to jokingly ask Thad if anything in Minden couldn’t be traced back to the Chaffes. I’m not sure if it doesn’t all go back to the Chaffes.

Much of that history is outlined in a delightful book Thad put together of his mother’s memories titled “When I Was a Little Girl, And After, Too.” Treeby Chaffee, was the youngest child of Christopher and Jane Farley Chaffe, born in 1865. In 1893, she married Robert Hyneman Miller, who came to Minden in 1890 to serve as cashier of the new Bank of Minden.

R. H. and Treeby Miller had five children, the youngest, born in 1903 was named Treeby, after her mother. Treeby was a graduate of Minden High School, and Newcomb College.

She returned to Minden where she taught at Minden High School and in 1931 she married Harry Carter Andress, who had come to Minden to operate the Ford dealership opened by his brother Redden Thaddeus Andress.

The Andresses would make Minden their home until their deaths in 1976, Treeby, and 1980, Harry.

Thad was the first child born to their union, followed by his brother Miller and his sister, Joan.

Again, relying on the newspapers, Thad had a busy and happy childhood, his name appearing in various organizations and meetings beginning with his service as the scepter bearer at the Minden Mardi Gras at age two in 1935, when his father was King of Mardi Gras.

Thad graduated from Minden High School as the valedictorian of the MHS class of 1950 and went on to further his education at Sewanee: The University of the South where he graduated with a B.A. in 1954.

Uncle Sam then called him to serve in the US Army for two years.

After discharge, Thad enrolled in the M.B.A. program at Harvard University.

After graduating from Harvard, he returned to Minden to help run the family auto dealership and immediately became actively involved in civic affairs.

In September 1959, Thad married Sarah Elizabeth (Sally) Tatum of Homer. Thad and Sally would be married for nearly 42 years until her death in 2001. To their union were born four children, Weston, Elizabeth, Laura and Collier.

After Sally’s death Thad married Oneta Hancock and added her two children, Kendall and Allyson to his family.

I mentioned the count of newspaper articles for a reason. I had planned to enumerate Thad’s positions of service in Minden, but I soon realized it would be an easier task to list any projects or causes in which Thad did not participate. Not sure there are any.

He was particularly active in the local Jaycees and later the Chamber of Commerce, serving as the leader of both organizations and heading major committees and projects of the Chamber for over a half-century.

In 1969, when Thad received the Distinguished Service Award from the Minden Jaycees. They listed more than 20 local civic groups in which he had filled a leadership role.

After Andress Motors closed in 1965, Thad became the manager of the insurance firm founded by his grandfather in 1890, the R. H. Miller Insurance Agency.

In this new job, his civic involvement only increased. He played an instrumental role in the first incarnation of the Dorcheat Historical Association in 1975 (more about that later.)

I would be remiss to not mention all the work Thad did for his church, St. John’s Episcopal, that his ancestors helped found. He served at the local and regional level in many positions of leadership.

I would often drive by St. John’s after slipping out of First Baptist Sunday School and see him greeting folks outside the service. Thad’s attitude was to always try and make our community a better place to live and give his all to make that happen.

In 1994, when he was honored by the Minden Lions Club as Minden’s Man of the Year, he expressed it this way: “It is with extreme pleasure I accept this award, it’s great to join a long list of those who try to do good things for Minden. It’s great to be in a place where you can call on people, Minden is a great place to be.”

As an adult, my connection with Thad came largely through two projects to which he devoted his time. One was the board of the Minden Cemetery Association. Thad got me involved in the organization and he was always looking out for the best interests of the organization.

He left it in the capable hands of Ty Pendergrass, but Thad was willing to do anything to help preserve the cemetery.

He even went so far as doing something I wouldn’t touch “with a ten-foot pole.” In 2007, he portrayed his grandfather, R. H. Miller in our annual Ghost Walk.

After its founding in 1975, the Association floundered and was largely non-existent by the middle 1990s when some local people, including George Turner, Richard Campbell and others began to attempt to revive the group.

We set up a fledgling museum in the old Crichton Hardware building, but we just couldn’t seem to get over the hump.

Early in the 2000s, Thad assumed leadership of the Association and with his driving influence things began to change.

He began an aggressive fund-raising approach and strove to make the Association a thriving group and move toward the establishment of a first-class museum.

In 2007, he took bold steps toward the creation of that museum by steering the group to hire a full-time director to head the museum project and chose fellow history-lover Schelley Brown Francis for the job.

Together they worked with the help of the design genius of Larry Milford to create the wonderful museum we have today.

I asked Schelley to talk about her work with Thad and she expressed it this way:

“The passing of another pillar of our community is a huge loss for the Dorcheat Museum,” she said.

“I can tell you that there never would have been the museum as it is today without Thad’s push and pull. In 2007 a meeting was held at the Andress home with the decision being made that I had one year to get it off the ground.

“Eleven years later Thad’s dream is a working, functioning reality. Thad was committed to having the best small museum possible done during his lifetime.

“He served for many years as the President of the Dorcheat Museum and only stepped down when his health issues slowed him down. We worked on countless projects, books, cards, exhibits, and brainstorming sessions together…. Both of us being a little hardheaded, we sometimes butted heads…. but I felt we always respected each other and the fact we were both strongly convicted to our goals of a successful museum.

“I believe the museum was one of Thad’s most loved accomplishments. He loved his family and it was important to him to keep his family history alive as well as a place his grandchildren could come visit.

“We served on the Minden Cemetery board together as well. Thad felt that as I did that the cemetery was an important part of our history.

“We have lost so many of this generation and it is a loss we will feel from now on. Thad’s passing will leave a great void in so many lives and in Minden.”

Schelley expressed it so well, I don’t think anyone can question the fact that Minden will never replace Thad Andress.

On a personal note I have experienced some health crises over the past few years, the first person to step forward to offer help in my times of need was Thad.

I will miss him so. We cannot replace Thad, but we can dedicate ourselves to carry on his work of “doing good things for Minden.” Good bye my friend, may you rest in peace.