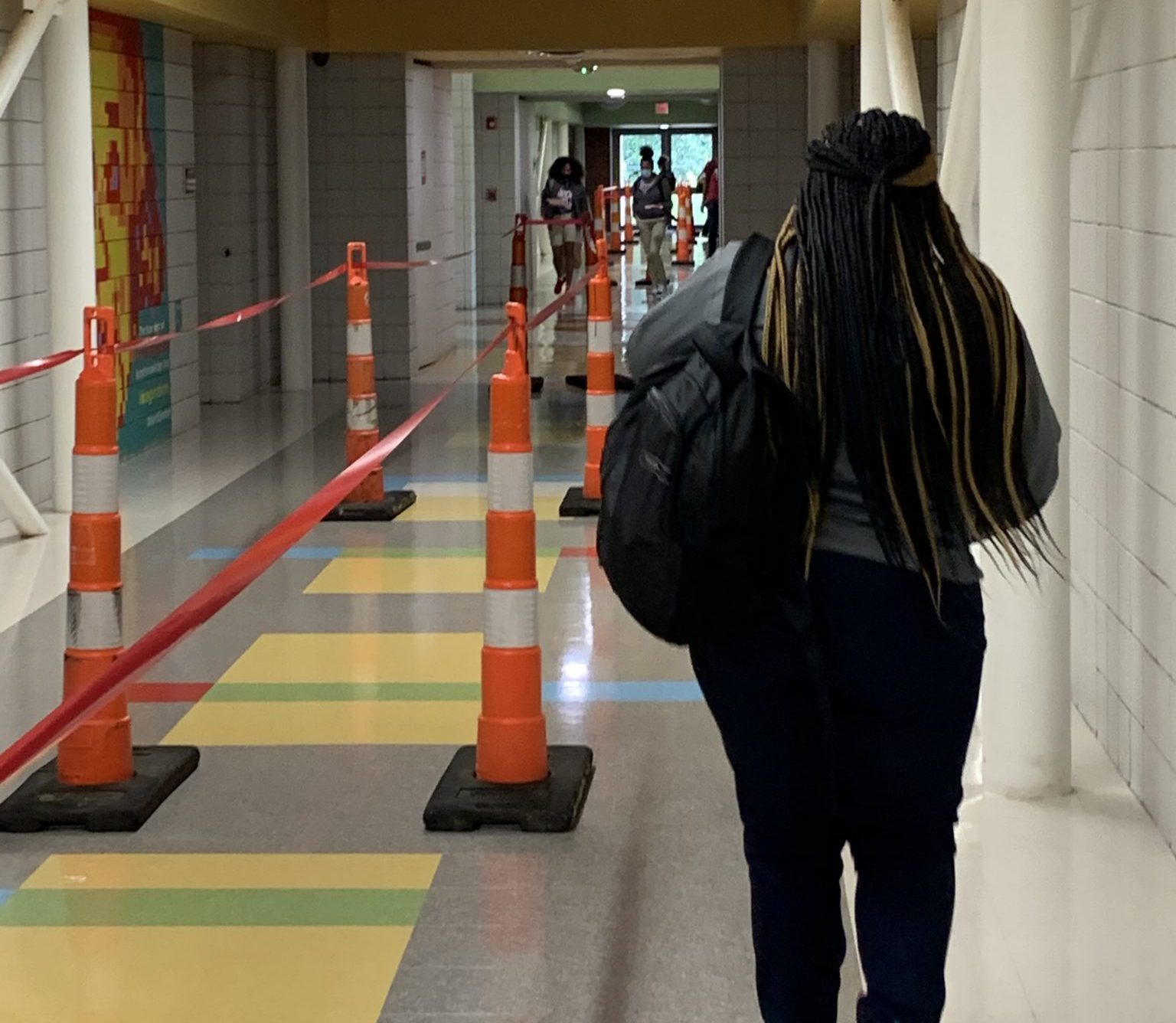 A few of Minden High School’s seniors took the opportunity to share what their experience of coming back to school amidst a pandemic was like. From significantly reduced class sizes, wearing masks, and having a heavier reliance on digital learning, students are truly coming back to a school year that is like no other.

Seniors Kameron Tally and Logan Rhoads are on the hybrid system, the approach recommended for schools while the state is still in phase two of re-opening. In the hybrid system, the school population has essentially been divided in half, with one half going in on Monday and Wednesday, the other half going in on Tuesday and Thursday, and everyone doing virtual on Friday.

Chloe Giovengo, Senior, is doing 100% virtual learning. As the name implies, the students who chose this option are taking all of their classes online, without ever having to step foot on the campus.

One of the main changes that the students noted was the increased amount of personal responsibility that came along with having to do a lot of their assignments online. Students are often given their virtual work and a deadline by when it has to be turned in, but other than that the students have a lot more autonomy about when exactly they do the assignment, and some see this as a more positive change.

“I go to school Tuesday /Thursday, so I don’t go Monday/Wednesday and Friday. Of course,  I still have work those days, but I get to do classwork at my own pace,” said Rhoads, one of the Hybrid students.

“I run my own photography business, so I have a lot more time to market, and book sessions on those days, and just free time in general. There’s just a lot more you can do.”

Giovengo, a 100% online student, stated that the risk of going back to school in a pandemic was the main reason for her choosing to do virtual learning. On top of that, she also feels that she is better suited for an online learning environment.

“It’s a much better environment for me. I think that it’s just too much of a risk to go to school right now based on the way things are going. My parents, they have jobs, so if I were to get COVID and I were to give it to them, they wouldn’t be able to go to work. So I made this choice because I don’t want to put them in danger or myself,” said Giovengo.

“I love going to school, but I spend so much time on my computer now, so this wasn’t a really big change for me, just sitting and watching class from my computer, so it didn’t really affect anything in my life.”

Rhoads even went as far as to say that he and other students believe that this form of learning is more akin to what they will experience in college, and thus are being able to get an early feel for what that kind of their education will be like.

“A bunch of people in my class have said that this feels a lot more like college. It kinda prepares you for college. You’re not quite as free as you would be, but you have more freedoms than you usually would with high school,” said Rhoads.

“There is definitely more personal responsibility that you have to take on, but I think it prepares you better for college, because it’s closer to that experience you’ll get in college.”

As far as what the in-person part of learning looks like now, Tally stated, “We sit apart, but there’s still conversation going on, and interactions with the teacher verbally.”

Adding to the response, Rhoads said, “It’s a lot less paper-based. Even in the classrooms, we’ll be doing a lot of our work on the Chromebooks, like bell ringers and short assignments. The only things we have that are paper-based are assignments that you have to read.”

While education has definitely taken a shift, some of the day to day changes can be a stark contrast to what school was like before the pandemic as well.

As Tally explains, one of the biggest differences is having your social circles cut in half, with only certain students being able to come to school on certain days.

“One of the biggest changes for me was the social order. Having just half a group of friends that you know, and getting used to that,” said Tally.

“If you’re virtual, and you got football you come from home, but if you’re the B group you, you stay at school and go to practice, so there’s some adjustment you have to make.”

One of the more difficult aspects of dealing with this new school year was that of the uncertainty that follows it. Students this year simply do not know if they will be able to partake in many of the activities that students have come to expect from their high school experiences, like school dances, which takes its own toll on the students.

“One of the hardest parts about coming back is having uncertainties. Like, we don’t know if we’re going to have homecoming or prom, and it’s my senior year, so that kind of sucks. I didn’t get to have my prom Junior year either. So yeah, a lot of uncertainties and hoping things can happen,” said Rhoads.

While adapting to the changes may prove to be more challenging than what students have had to face in the past, it seemed like all the students were aware and appreciative of the precautions that the school has put in place in order to open up safely.

“A difficult part about returning is just adapting to the different situations. What you used to be able to do before, you can’t do now. But at the same time, the faculty and staff are doing a great job of keeping us safe,” said Tally.