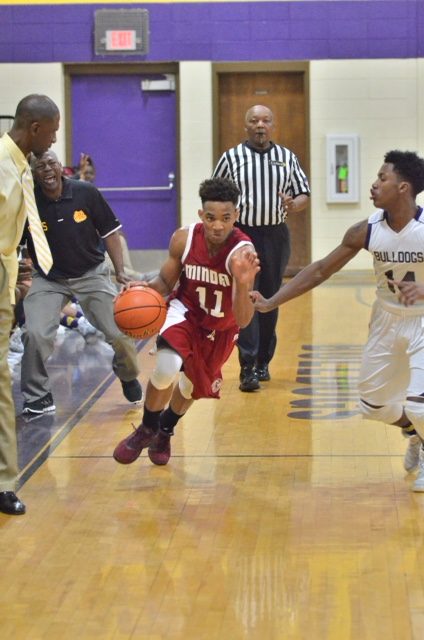 With two Webster Parish teams still alive in the LHSAA football playoffs, it’s hard to think hoops, but the 2016-17 season is upon us.
The Minden Crimson Tide tipped off their season Monday with a 69-67 loss to Gibsland-Coleman, while the Minden Lady Tiders ran away with their game, 79-26.

The Tide showed plenty of fight in their debut under new head boys basketball coach Rennie Bailey, but couldn’t make enough plays to knock off the homestanding Bulldogs.

“At halftime we were down by 5 or 6,” Bailey said after the game. “Going down the stretch Gibsland made plays to win the game on the offensive and defensive end of the court.”

It was the first game for the Tide since the firing of long-time head coach Alan Shaw, and the first look at a team in re-building mode, lacking size and playing several first-timers.

“One area which we were not very good in was rebounding,” Bailey said. “That’s going to be our achilles heel. We have one guy who is 6-foot-1 or so, so we’ll always be undersized when we play. We’re going to have to block out to rebound the basketball, and we weren’t very good down their tonight.”

Bailey did say he was proud of his team’s spirit and hustle for his first night on the bench.

“There’s a lot of room for improvement,” Bailey said. “But I was proud of the effort and the willingness to fight at the end.”

Aaron Moses had 12 points to lead the Tide, Jalen Moore had 11 points, Jalone Branch had 7 points and Sakari Batton added 6.

The Lady Tiders had no such troubles in their opener, crushing the Lady Bulldogs.

“We were able to really shoot the basketball well tonight and played well on the defensive end,” Lady Tiders head coach Jacob Brown said. “We got good ball movement and attacked the offensive glass hard all night.”

Battle for the Paddle

The season is underway in Doyline as well, where the Panther boys are off to a 2-1 start. The Lakeside Warriors are looking to spoil that start in their opener against the Pathers Tuesday night in Doyline in the Battle for the Paddle.