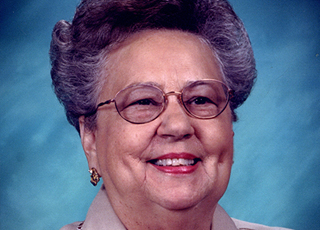 A celebration of life service honoring Betty Jean Evans Beatty will be held at Minden’s Rose-Neath Chapel on Tuesday, May 3, 2016 at 10 a.m. with the Rev. Ronnie Whitlock assisted by the Rev. Bill Crider officiating. Family visitation is on Monday, May 2, 2016 from 5 until 7 p.m. Burial will follow service at Gardens of Memory Cemetery.

She is survived by one sister, Mary Sue Brown of Victoria Texas, son Bruce Beatty, daughter Becky Beatty Holomon, special son-in-law, Mike Holomon, grandsons Garrett and Will Holomon, along with a host of nieces and nephews.

Betty Jean grew up in rural Dubberly where she attended and graduated from Dubberly High in 1950. In September 1950 she married Harold Beatty of Heflin. Betty Jean went to work for Bell South and served as a service representative for 32 years retiring in 1983. Betty was a devoted wife, mother, and grandmother. She was known to most as Betty Jean or “Bessie” and was known for her exceptional cooking and service to others. Two of her special dishes were chicken and dumplings and caramel cake—there were never any leftovers.

Betty’s cooking became her special ministry to friends and family in need. Betty’s life was exemplified by her faith in God serving in many capacities at Beech Springs Baptist Church most of her adult life. Betty was also active until 3 weeks ago in water aerobics at Minden’s recreation center. She also eagerly anticipated monthly gatherings of the elite group known as the “Dubberly Divas.”

Betty’s family wishes to extend their sincerest appreciation to Dr. Michael Chanler, Brent Fegley; ICU nurses, Brittney, Erin, and Marnie for the love and care they showed our loved one in her final days.