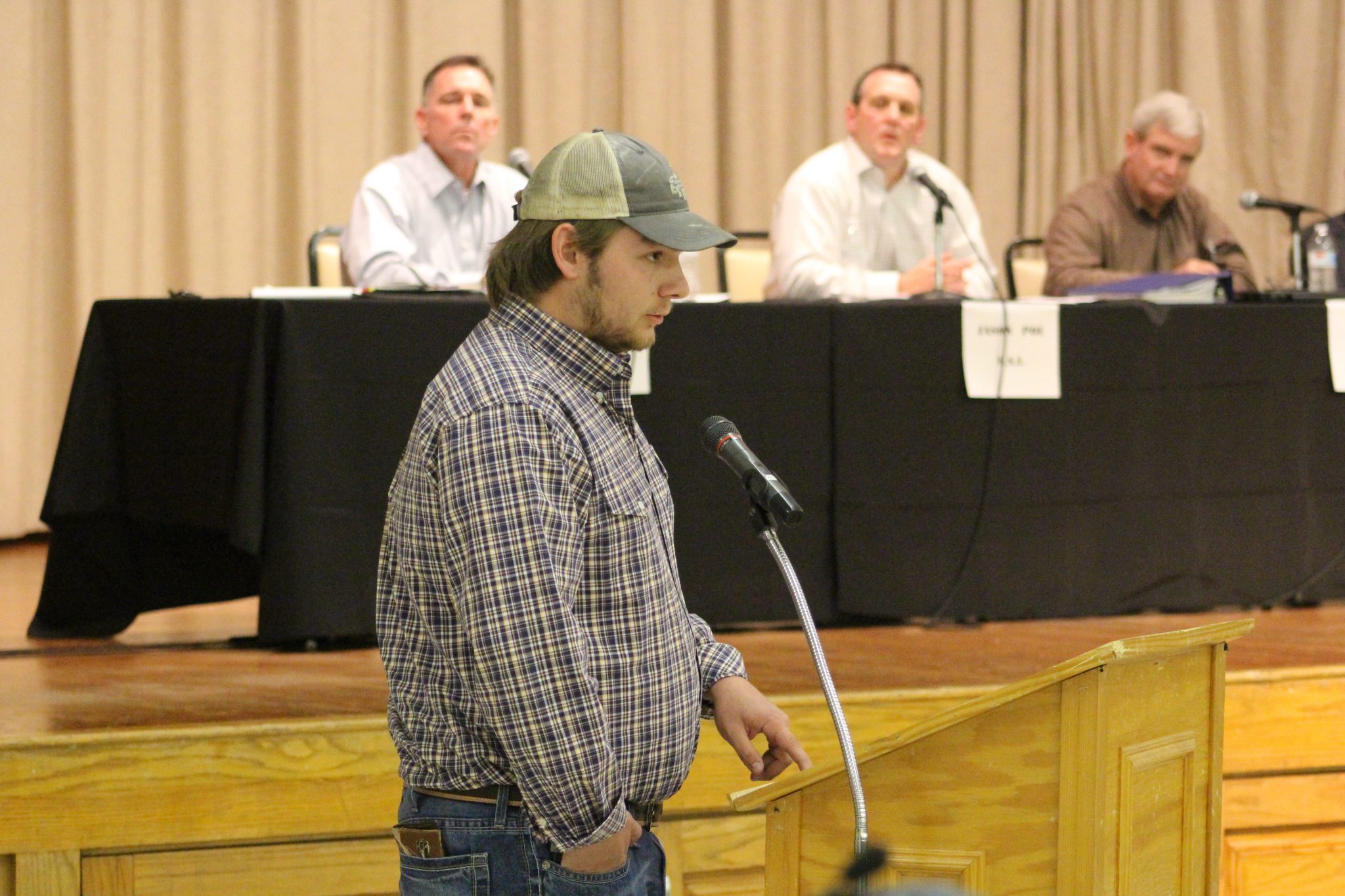 A panel discussion Thursday gave supporters and opponents of whether the contained burn chamber should stay or go a chance to voice their concerns and ask questions – and most of that centered on job creation.

A crowd of about 150 people came out to the meeting where Explosive Service International Vice President Jason Poe, Project Manager Dean Schellhase, David Madden and Toxicologist Dr. Robert Flournoy fielded comments and questions. While many voiced their support of the chamber staying at Camp Minden, others said they wanted it to go.

Minden-South Webster Chamber of Commerce board member Pam Bloxom said she was pleased with how the meeting went, because people were given a chance to hear the facts.

“I’m very encouraged tonight because it seems that not only do we have the employees of ESI, not only the neighbors of ESI, but we have just general residents of Minden and Webster Parish who spoke up on behalf of job creation that may come with ESI,” she said. “They’re telling us that they have 35 now, and they could easily make that another 35, and I’m seeing at least 100 in 18 months.”

Many talked about the job creation, saying jobs have left the area in droves, and ESI is a company that is asking to bring employment to the area. Johnny Fincher said explosives have been a part of Webster Parish for decades, and it’s time to stop blocking everything that comes in.

“A lot of business owners in this room and citizens prospered off the Louisiana Army Ammunition Plant,” he said.

“Let’s just be honest about that. To say that you don’t want an operation to come in because of the dangers, every day of your life is a danger. To say that in order to keep jobs from coming to this area that is thirsty and hungry for jobs, I can’t understand how we’re going to keep society at a minimum instead of expanding. We need more work in this city.”

Schellhase said the discussion was not about who was for or against the burn chamber but having it in a format where everyone could be heard. He addressed concerns about the environmental impact if the chamber stays, saying the numbers show how clean the stack emissions are.

Ron Hagar, chair of the Camp Minden Citizens Advisory Group, said the “best” technology was not being used. The dialogue committee in 2015 asked for better technology but did not get it, he said.

“For some reason, the EPA and all these agencies settled on technology that was 30 to 50 years old,” he said. “There’s stuff that could real-time test the stuff that’s coming out of that stack, and it’s not being used.”

The pollution abatement equipment went through exhaustive reviews by all the regulatory agencies, Schellhase said.

One of the biggest concerns among citizens is the cancer rates in Webster Parish. Coroner Dr. Max Stell states in a letter the parish’s cancer rate was “deemed stable compared to other years.”

“Though our cancer rate is slightly higher than the state average, we are not considered in the ‘cancer hot bed,’” he said.

Schellhase said the data did not distinguish between types of cancer, but rather cancer as a whole.

Linda Johnson, who recently lost her husband to cancer, said she was against the chamber staying for the very reason that the cancer rates are higher here.

“Saying you can add one more thing into the picture, it doesn’t comfort me one little bit, because we do not know if adding one little bit from this burn chamber to that what a difference that’s going to make to our cancer rates,” she said. “Our cancer risk is far higher here in our community. That is the reason I personally am against keeping the burn chamber here. It was to be assembled and then disassembled. That was the agreement, and it was only to correct something that was done at Camp Minden that was not supposed to be done that endangered us.”

Schellhase said the U.S. Army, through legislation called the Cease Fire Initiative, is actively seeking alternatives to open burn. The National Academy of Sciences will be sending a group to Camp Minden to tour the contained burn chamber site, he said, and it is at the top of the list for evaluation as a solution to open burn.

He also went through the Finding of Suitability for Early Transfer agreement, which was signed by then-Gov. Kathleen Blanco when Camp Minden was transferred from the U.S. Army to the state. The agreement dictates the types of commercial businesses that can lease property at Camp Minden, meaning only businesses of “like use” for explosives and manufacturing.

The chamber has about a 20-year lifespan, Schellhase said, and it was built to handle other explosives besides M6, although it was specifically designed with M6 in mind. It could produce at least $12 million per year in revenue, Madden added.

ESI, in addition to the dashboard at www.esicampminden.com, has used several ways to disburse information about the burn chamber. One is through their fact checker, www.chamberfactchecker.com, and another is through Facebook, Clean Burn Chamber.