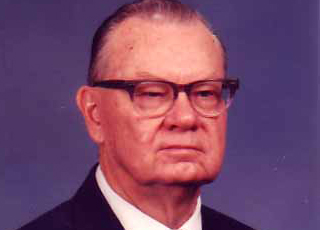 A celebration of the life of Dennis Edgar Mitchell Jr. will be held at First Baptist Church in Winnsboro on Thursday, June 2, 2016 at 10 a.m. with Dr. Max Lee and Bro. Craig Beeman officiating. A graveside service will be held at 3 p.m. at Gardens of Memory in Minden, under the direction of Mulhearn Funeral Home of Winnsboro.

Edgar was born on June 17, 1927 in Minden and the Lord called him home on May 30, 2016. He graduated from Minden High School in 1945, and soon began a very successful career of 47 and a half years with the Louisiana Department of Transportation and Development as a Professional Licensed Civil Engineer. Edgar loved his work; he delighted in doing the very best job possible to make highways as safe as possible for the traveling public. He transferred from Alexandria to Winnsboro in April of 1961 as the Assistant Maintenance Engineer when the Chase headquarters was established. He was promoted to the position of District Administration in 1972 and retired in March of 1993 after serving in that position of 21 years. Edgar loved and respected his employees and believed in helping them reach their highest level of achievement.

Edgar was an active member of First Baptist Church in Winnsboro. He soon became known as the “fixer” at the church. If he saw something that needed repairing, painting, or cleaning he took care of it – many times unknown by others – this was the blessing of having done these various repairs.

Edgar was preceded in death by his parents – Dennis E. Mitchell Sr. and Lona Almond Mitchell, his sister Julia Penny and husband Vunoy. He is survived by his wife and love of his life Jean Frye Mitchell, a daughter Kay Burton and her husband Kenneth of Louisville, Mississippi, a son Alan Mitchell and his wife Shelley of Gillette, Wyoming, two grandchildren Brittany and Bryan Burton, and niece Judy Carol Jones and her husband Marvin of Minden.
Serving as pallbearers are Jerry Benit, Dennis Berry, George Boutwell, Bryan Burton, Ken Free, Marvin Jones, Herbert Miller and Pete Rawls.

Visitation will be Wednesday, June 1, 2016 at First Baptist Church in Winnsboro from 5 until 8 p.m.

Memorials may be made to your favorite charity.

Online registry/condolences may be made at www.mulhearnfuneralhome.com.