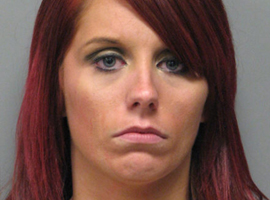 Webster Parish Sheriff Gary Sexton says her father reported she’d spent approximately $2,500 on the card although the purchases she made are unknown.

“Upon receiving his bill, he pursued charges against her,” he said. “He said he had some more stuff coming in, but he couldn’t prove it at that point.”

She was picked up by Deputy John Lewis Jr. at the Minden Police Department and transported to Bayou Dorcheat Correctional Center for booking.