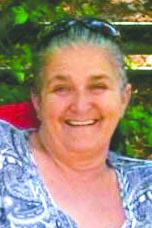 A celebration of life will be held for Donna Cook at 5pm  September 14, 2019 at the Junction City Community Center in Junction City, AR.  Donna was born March 17, 1958 in Springhill, LA and passed from this life on August 14, 2019 in Bernice, LA after a lengthy illness. She resided in Junction City, LA.

Donna is preceded in death by her parents, Frances Milam and Duwane Freeman, her stepfather Freddy Milam, special friend Ernie Medlin, her brother Ronnie McPherson, and an infant son.

She is survived by her husband Brian Cook, her two loving daughters, Jamie Culverhouse (Jason) and Kimberly Tate (Peewee), two brothers Craig Freeman (Stephanie) and Wayne Freeman (Becky), nine grandchildren, Matthew, Rebecca, Jake, Yazmin, Cory, Jr, Austin, Savannah, and Nevaeh, and two great grandchildren Drake and Lillieana. Donna also had her “bonus children” that she loved as if they were her own: Gloria, Crystal (Mike), Zach, Jonathon (Kayla). Donna leaves behind a host of nieces and nephews.

Donna was loved by many, and gave just as much love to others.