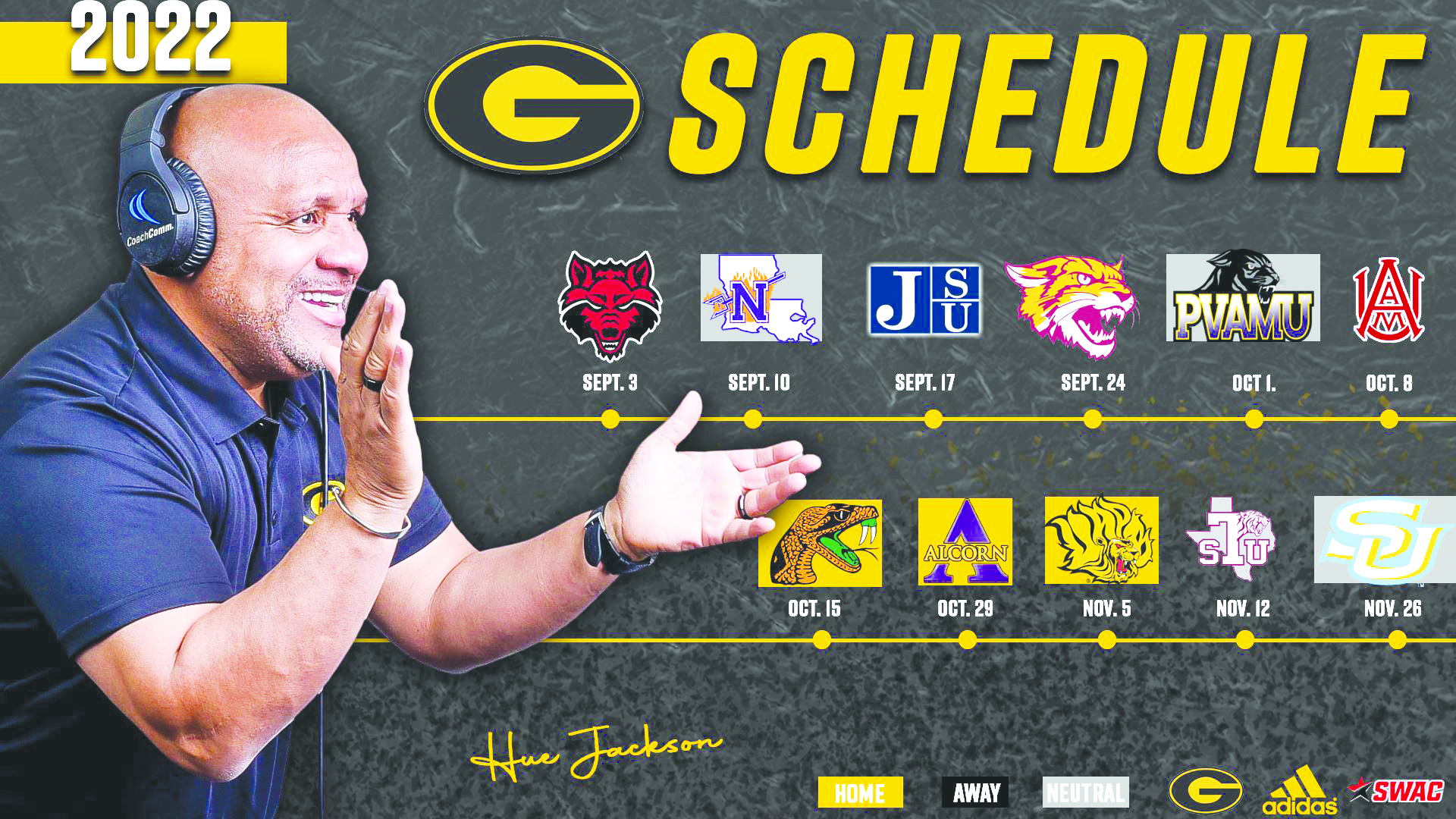 GRAMBLING — Grambling State University has announced its 2022 football schedule to be played under the guidance of first-year head coach Hue Jackson.

The Tigers will open the season with three non-conference opponents, before concluding the 2022 campaign with eight Southwestern Athletic Conference (SWAC) games, including three inside Eddie G. Robinson Memorial Stadium.

Season ticket packages for the upcoming season, which will include the three home games, the Northwestern State game in Shreveport, La. and the State Fair Classic in Dallas, Texas, will officially go on sale during the Tigers’ Spring Game on April 2 at Eddie G. Robinson Memorial Stadium.

The Spring Game will be played on April 2 at Eddie G. Robinson Stadium with a time to be determined at a later date. Tailgating space will be limited and more information with how and when to purchase tailgating spots for the spring game will be released in February.

Grambling State begins the season on the road to face Arkansas State on Sept. 3 at Centennial Bank Stadium in Jonesboro, Arkansas. This will be just the second meeting between the Tigers and Red Wolves, with Arkansas State claiming a 10-7 victory in 1985.

One week later, on Sept. 10, the Tigers visit Independence Bowl Stadium in Shreveport to take on Northwestern State. Grambling State and NWSU last met in 2018, with the Demons picking up a 34-7 victory in Natchitoches. It will be the sixth meeting between the schools in the series.

Grambling State will get a good look at the potential SWAC East Division favorites on Sept. 17 when the Tigers visit Jackson State in a non-conference matchup. GSU is 47-22-1 all-time against JSU, but dropped its last decision at home, 33-28, in the spring of 2021.

The Tigers continue their season-opening road swing and open SWAC play on Sept. 24 in Daytona Beach, Florida, at Bethune-Cookman. This will be the 13th meeting between the two schools and Grambling State will be looking to erase a three-game losing streak to the Wildcats.

Grambling State heads back onto neutral soil on Oct. 1 with the annual trip to Dallas  for the State Fair Classic and a meeting against Prairie View A&M. Both teams will be coming into this contest with first-year head coaches as the Tigers will be seeking their first victory over the Panthers since the 2017 season.

The G-Men will wrap up their first road swing on Oct. 8 with a trip to Huntsville, Alabama to take on Alabama A&M. The Tigers are 21-6 all-time against the Bulldogs and have won five straight in the series.

Grambling State makes its long-awaited home opener on Oct. 15 when Florida A&M comes to Eddie G. Robinson Memorial Stadium. The Tigers are 10-6 against FAMU in the series, but dropped last season’s contest in Tallahassee, Florida.

After an open week, Grambling State returns to Eddie G. Robinson Memorial Stadium on Oct. 29 when Alcorn State comes to town. The Tigers and Braves will be meeting for the 73rd time in the series.

Grambling State wraps up its three-game homestand on Nov. 5 against Arkansas-Pine Bluff in the 2022 Homecoming Game.

The Tigers are 31-13-2 in the series against the Golden Lions and will be looking to avenge last season’s 33-26 setback.

The Black and Gold take to the road on Nov. 12 and will visit Texas Southern. The two will be meeting for the 69th time in the series and GSU will be coming into the contest riding a seven-game win streak against TSU.

Grambling will conclude the regular season on Nov. 26 in the 49th Annual Bayou Classic. Grambling State and Southern traded blows in the 2021 game as Garrett Urban booted the game-winning field goal to lift the Tigers to the rivalry win.