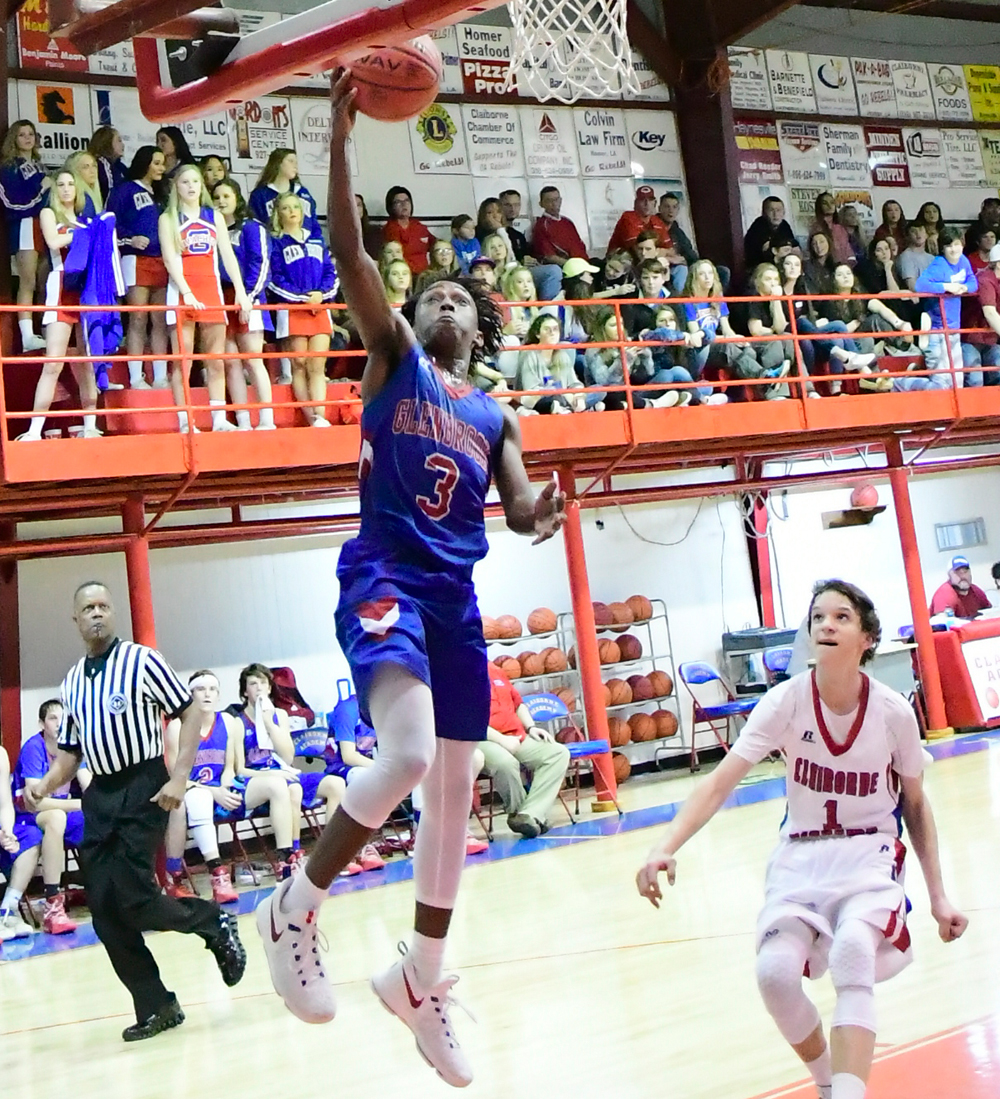 HOMER – There are not many that will feel as good as this one did for the Glenbrook Apaches.

Playing on the road and against their rivals from Claiborne Academy, the Apaches took the Rebels behind the woodshed for an old-fashioned beatdown, coming away with a 69-35 win that moves the Apaches to 3-0 in district 6AA.

The Apaches (10-5) are playing their best basketball of the season on the heels of losing two key contributors, Lemoris Jackson Jr. and Seth Tyler, to transfer.

With Jackson and Tyler bound for Minden High, Glenbrook has responded with three-straight wins, Dakota McGarity and Cade Clemons have stepped up in their place.

Against Claiborne, McGarity and Clemons combined for 16 points, while Joseph Windham came through with 19 points to lead the team.

“Guys are trusting each other, working hard and having fun,” Glenbrook boys head coach and Athletic Director Jeff Dalton said. “We were sloppy in the first half on offense; that can happen in a rivalry game, but we settled down in the second half and played really well on both ends of the floor.”

Da’maza Robinson played well for the Apaches, taking care of the ball and hitting the glass. He finished with 8 points and 10 rebounds. Cade Conterez was in double figures with 13 points for Glenbrook.

Next up for the Apaches is a Tuesday home game against the River Oaks Mustangs.
Minden vs. Benton (boys)

BENTON – At Benton, the Minden Crimson Tide lost a single digit game for the seventh time this season. 58-55.

It was the district opener for Minden and a game where they led late. However, once again, the Tide could not hold on in the fourth quarter.

“I think we’re getting a better understanding of how to play,” Minden boys head coach Rennie Bailey said. “We’re playing more together, but now we’re at a point where we have to figure out how we can close the game out.”

With less than two minutes to play the Tide led by as many as 6 points, but a lack of awareness down the stretch cost the young team, much like it did in their home loss to Gibsland-Coleman almost one week ago at home.

Bailey said he shares some of the blame for the late-game lapses.

“I knew we had to play zone at some point based on the scouting report,” Bailey said. “Late in the game they knocked down three 3-pointers when we should have been in zone. I will take the ‘L’ for this one.”

Leading scorers for Minden were not available at press time.

CAMPTI – Lakeside kept it close in what Warriors head coach Jason Gould called a, “very heated game,” but could not find a path to victory, falling on the road against the Lakeview Gators 60-51.
“There were a lot of heated exchanges,” Gould said. “It went back-and-forth; just a rough night.”
At the end of the first quarter, Lakeside (12-8, 1-1) held a 6-4 lead as both teams tried to work through shooting woes.

The Warriors played at a slower pace to control the tempo early on, but in the second quarter Lakeview started to impose their will.

Lakeside went into the half trailing 22-12 after a 18-6 second quarter in facor of Lakeview.
In the third quarter Lakeside scored 23 points to get back in the game, trailing 37-35 at to begin the final quarter of play.

Lakeside took the lead in the fourth quarter, but foul trouble would decide the outcome as Jalen Gould, Chase Mitchell and Tyreke Loftin would all foul out over the course of the final few minutes of play.

Damian Coleman led Lakeside with 18 points in the loss, followed by Mitchell with 13 and Gould with 8.

The Warriors next game is Tuesday on the road against Jonesboro-Hodge.

The Minden Lady Tiders (18-2, 2-0) picked up an important district victory over the Benton Lady Tigers Friday, coming away with a 61-47 win in a matchup that could decide a champion before all is said and done in 1-4A.

“It was a great game and a great environment,” Minden girls head coach Jacob Brown said. “It’s all about how you handle the moment. Each game has its’ own unique matchup or run. Tonight, I think our ability to rebound and get out in transition made a difference. We played aggressive.”

The Lady Tiders took a 38-30 lead into the fourth quarter. In the final quarter, the Lady Tiders speed in transition began to show as they pushed that lead up to 47-34 on a 3-pointer by Bre Rodgers. From there, the lead was too large for Benton to overcome, as Minden won comfortably.

It was Rodgers’ night, as she finished with 23 points, including five made 3’s. Strawberry Batton gave her strong support with 22 points.

“This is a very disappointing loss,” Lady Apaches head coach Rendi Dillard said. “We had trouble scoring the entire game.”

Glenbrook had only 6 points at halftime. Kara Bryce and Amelia Christy led Glenbrook with 4 points. The Lady Apaches take on the River Oaks Lady Mustangs on Tuesday.