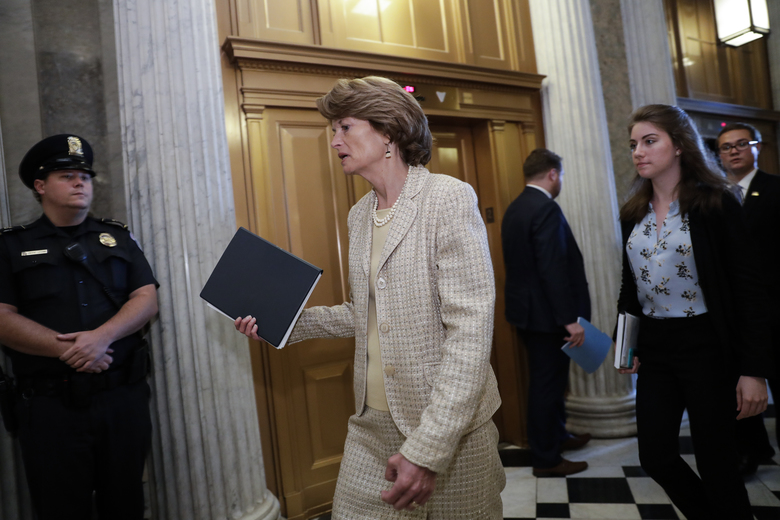 WASHINGTON — They couldn’t pass a repeal of “Obamacare,” or find the votes for a White House-backed replacement. So now Senate Republicans are lowering their sights and trying to unite behind a so-called “skinny repeal” that would merely undo just a few of the most unpopular elements of Barack Obama’s law.

The “skinny bill” is an admittedly lowest-common-denominator approach, and it may not even have the votes to pass, either. But as Republicans search for how to keep their years-long effort to repeal and replace “Obamacare” alive, they’re coming to believe that the “skinny bill” may be the only option left.

“It still keeps it in play,” said Sen. Steve Daines of Montana. “It’s threading a needle at the moment, trying to get 51 in the United States Senate.”

President Donald Trump urged lawmakers on in a tweet Thursday morning: “Come on Republican Senators, you can do it on Healthcare. After 7 years, this is your chance to shine! Don’t let the American people down!”

The Senate strategy emerged after Republicans barely succeeded earlier this week in opening debate on health legislation in the narrowly divided Senate, winning the procedural vote to do so thanks only to Vice President Mike Pence breaking a 50-50 tie.

Hours of debate followed, as well a few amendment votes that starkly revealed Republicans’ divisions. On Tuesday, on a 57-43 vote with nine GOP defections, the Senate rejected a wide-ranging proposal by Majority Leader Mitch McConnell to erase and replace much of the Affordable Care Act. Then on Wednesday, a straightforward repeal measure failed 55-45 with seven Republicans joining Democrats in voting “no,” even though nearly identical legislation had passed Congress two years earlier.

At that time, Obama was in the White House and vetoed the repeal bill. But now, with Trump sitting in the Oval Office and itching to sign it, Republican senators demonstrated they didn’t have the stomach to go through with passing a measure that would end insurance coverage for more than 30 million Americans over a decade, according to the Congressional Budget Office.

In the wake of those two telling votes Republican senators have few options left, and that’s led them to look to the “skinny repeal.” The measure has not been finalized, but senators say it could eliminate Obamacare’s two mandates — for individuals to carry insurance and for employers to offer it — along with an unpopular tax on medical devices, and perhaps contain a few other provisions.

The purpose of passing such legislation would be to get something, anything, out of the Senate, so that talks could begin with House Republicans who passed their own more comprehensive repeal-and-replace bill in early May. The House and Senate bills would need to be reconciled by a “conference committee” into one final piece of legislation that both chambers would have to pass again.
“We’ve got to move it along and get it to conference,” said Sen. Chuck Grassley, R-Iowa.

A few GOP aides suggested that perhaps the House would pass the Senate’s “skinny bill” as-is, which would allow Republicans to claim at least a partial victory and move on to other issues. With tax legislation and other priorities waiting in the wings, Republicans are eager to move along after spending the first six months of Trump’s presidency trying unsuccessfully, so far, to fulfill their years of promises to repeal and replace “Obamacare.”

However the House might be unwilling to agree to the “skinny bill” as-is. Conservatives were already ruling that out.
“There would not be enough votes to pass it and send it to the president,” said Rep. Mark Meadows of North Carolina, head of the conservative Freedom Caucus. “But to use it as a vehicle to continue negotiations is certainly welcomed.”

The behind-the-scenes maneuvering came as the Senate moved through 20 hours of debate on repeal legislation, with Democrats unanimously opposed to the GOP efforts. Under the complex rules governing how the legislation is being considered, the debate will culminate at some point Thursday afternoon or evening in a bizarre exercise called a “vote-a-rama” during which unlimited amendments can be offered by all sides in rapid succession.

The vote-a-rama will likely last into the wee hours of Friday morning, or until “people get tired,” said Sen. John Cornyn, R-Texas.
And by the time it’s over, Republicans hope they will have found something, anything, that can get enough votes to pass.

“I think it is quite likely we will be here much of the night, if not all night,” said Sen. Ted Cruz, R-Texas. “And at the end of it hopefully we’ll have a bill that can bring us together.”