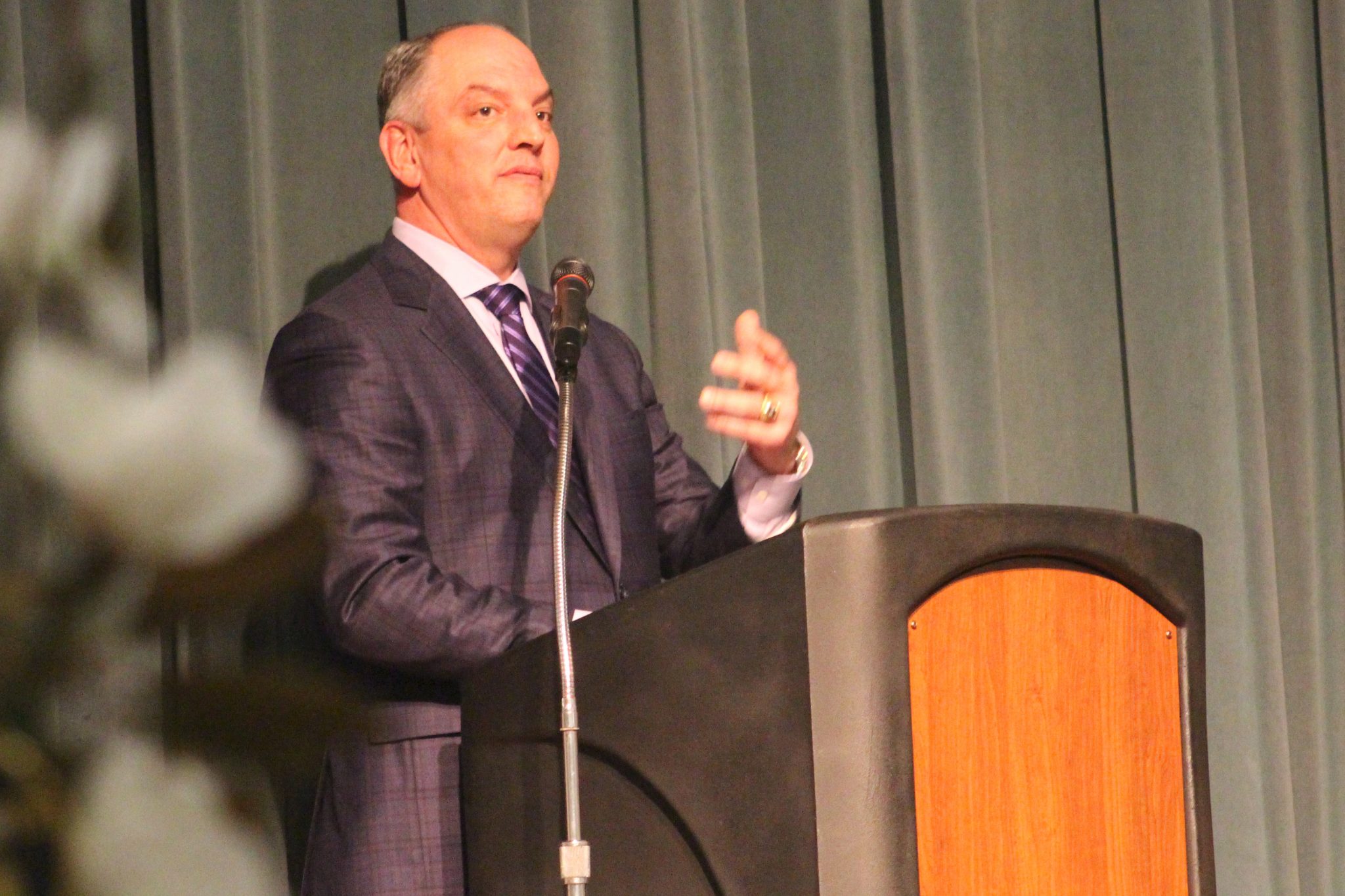 During his keynote address Thursday, he said this chamber is one of the few chambers of commerce still in existence after such a long period of time.

“There are not a whole lot of chambers in Louisiana that ever reach 75 years,” he said. “Congratulations to you all for that. The work that you do here with hospitality, it’s always a joy for me to come up here to Webster Parish, and I’ve been here a number of times both before and after the election.”

He also commended Minden and Webster Parish for its cohesiveness in bringing economic development to the area.

Edwards touched on Northwest Louisiana Technical College’s new workforce development center, saying he is excited about what’s going on with the new programs and partnerships with businesses to make sure students are work ready when they graduate.

“We’re committed to growing small businesses,” he said. “After all, they make up 97 percent of all employers in Louisiana, more than half of the entire private sector workforce in our state. Small business is critically important to our success. We’ve got a lot of work to do, we are doing a lot of work, and we’re going to continue along this area when it comes to workforce development and economic investment and going out and seeking people to come in all over the state and that certainly includes this region.”

Camp Minden is on the cusp of bringing great things to Webster Parish, Edwards said, touting the jobs that will be brought to the area with the state-of-the-art Louisiana National Guard training center. With roughly 450 jobs, including civilian, Guardsmen and commercial tenants, he called Camp Minden an asset to the area.

“That is inhibiting economic growth, investment and job creation,” he said. “We have to do better. We are going to do everything we can within the resources that we have.”

One of the major issues he discussed is the budget. Currently, Louisiana is facing a $304 million deficit. A plan has been discussed that will not involve new taxes, but cuts will have to be made. Edwards said he will ask the legislature to use $120 million from the state’s rainy day fund and plug the remainder of the deficit with cuts. He recognized those cuts would have to come from education and healthcare but said if legislators make the hard decisions now, it will get the state back on track to growth and prosperity.

“It’s going to be hard because all of the relatively easy things were done a long time ago,” he said. “These cuts are going to be painful, but I know that they’re necessary.”

The legislature will also be asked to call a special session beginning Feb. 13.

“Understand that without using the rainy day fund, there is going to be devastating, catastrophic cuts to healthcare, including our private partnerships with LSU hospitals, K-12 education and many other critical priorities,” he said. “That’s why we have to summon the courage to make the hard decisions to fix our problems, to stabilize our state so that we can have the state we want to have for our children and our grandchildren.”

When the regular legislative session begins in April, he said he hopes legislators can work together to make lasting changes to the state’s budget.

“In April, we will set the stage for prosperity for years to come,” he said. “Compromise is not a dirty word.”