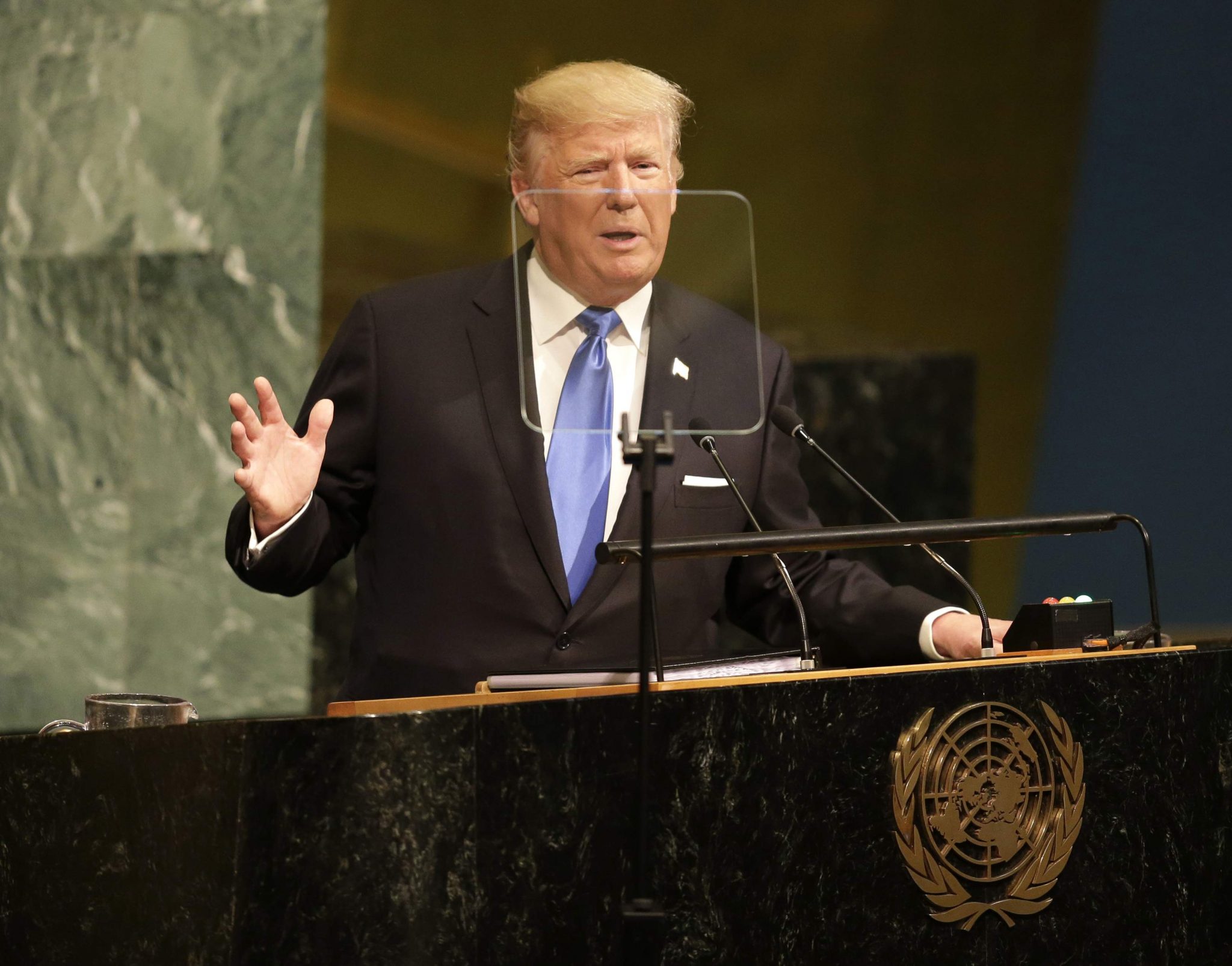 UNITED NATIONS — President Donald Trump has vowed to “totally destroy North Korea” if the U.S. is forced to defend itself or its allies against the renegade nation’s nuclear weapons program, making his case in a combative debut speech to the U.N. that laid out a stark, good-vs-evil view of a globe riven by chaos and turmoil.

Trump’s broadsides Tuesday against “rogue regimes,” North Korea chief among them, drew murmurs from the assembled world leaders and served as a searing salute to his nationalism during diplomatic prime time. He said it was “far past time” for the world to confront Kim Jong Un, declaring that the North Korean leader’s pursuit of nuclear weapons poses a threat to “the entire world with an unthinkable loss of human life.”

“Rocket man is on a suicide mission for himself and his regime,” Trump said, mocking the North Korean leader even as he sketched out potentially cataclysmic consequences. The president himself decided to work the nickname into his speech just hours before he took the dais, according to aides.

Trump spoke of his own nation’s “patience,” but said that if “forced to defend itself or its allies, we will have no choice but to totally destroy North Korea.”

Trump’s overheated language was rare for a U.S. president at the rostrum of the United Nations, but the speech was textbook Trump, dividing the globe into friends and foes and taking unflinching aim at America’s enemies. North Korea’s ambassador and another top diplomat left the General Assembly chamber before he spoke to boycott his speech, leaving behind two empty chairs.

The president urged nations to work together to stop Iran’s nuclear program and defeat “loser terrorists” who wage violence around the globe. He denounced “radical Islamic terrorism,” an inflammatory label he had shied away from in recent months after trumpeting it on the campaign trail. He called Syrian President Bashar Assad’s government a “criminal regime.” He said
violence-plagued regions of the world “are going to hell.” He made little mention of Russia.

For all of that, he said there was still hope the United Nations could solve “many of these vicious and complex problems.”
But he focused more on the problems than the hopes.

His lashing of North Korea was a vigorous restatement of what’s been said by U.S. leaders before, but delivered with new intensity in the august setting of the General Assembly. After a litany of accusations — the starvation of millions, the abduction of a Japanese girl and more — he questioned the legitimacy of the communist government by referring to it as a “band of criminals.”

Trump, who has previously warned of “fire and fury” if Pyongyang does not back down, claimed that “no one has shown more contempt for other nations and for the well-being of their own people than the depraved regime in North Korea.” And he scolded that it was “an outrage” to enable and trade with North Korea, seeming to point a finger at China, although he did not mention it by name.

Despite the speech’s bombast, it signaled little in the way of policy change. Trump stopped short of demanding regime change, which North Korea regards as the ultimate American intention and treats as a reason for its development of nuclear weapons. That may offer some reassurance to China and Russia, which have urged the U.S. to tone down its rhetoric and restart dialogue with North Korea.

Trump, who frequently belittled the U.N. as a candidate, urged the world leaders to embrace their own “national sovereignty to do more to ensure the prosperity and security of their own countries.

“I will always put America first. Just like you, the leaders of your countries, should and always put your countries first,” he said. “We can no longer be taken advantage of or enter into a one-sided deal in which the United States gets nothing in return.”

Trump called the U.N.-backed Iran nuclear deal “an embarrassment” to the United States and suggested it was one of the worst international pacts ever struck. And he hinted that his administration, which has accused Tehran of aiding terrorism in the Middle East, could soon declare Iran out of compliance with the deal, which could unravel it.

The administration must decide in mid-October whether it will certify that Iran is still in compliance with the agreement.
He also decried the “disastrous rule” of Venezuela’s Nicolas Maduro and urged the U.N. to step in

The speech drew varying reactions from leaders on the two sides of Trump’s black-and-white ledger. Israeli Prime Minister Benjamin Netanyahu, a Trump ally, wrote on Twitter, “In over 30 years in my experience with the UN, I never heard a bolder or more courageous speech.” Javad Zarif, the foreign minister of Iran, wrote that “Trump’s ignorant hate speech belongs in medieval times-not the 21st Century UN -unworthy of a reply.”

On Twitter late Tuesday, Trump claimed he met with “leaders of many nations who agree with much (or all) of what I stated in my speech!”

Outside of an oblique reference to a threat to Ukraine’s sovereignty, Trump made no mention of Russia or its president, Vladimir Putin. He chastised the U.N. for what he said was a bloated budget and bureaucracy but did not reiterate previous threats to cut Washington’s commitment to the world body. Instead, he pledged the United States would be “partners in your work” to make the organization a more effective force for world peace.