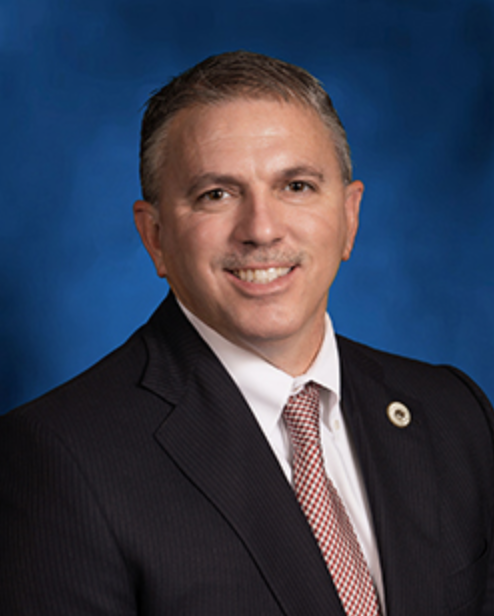 BATON ROUGE–Speaker Clay Schexnayder went from winning races in cars to winning races against career politicians, and the leading Republican legislator in the House was the last person who predicted that sharp curve in his road.

“When I first got elected in 2012, I was the first mechanic and first race car driver to be elected to the House of Representatives,” said Schexnayder, R-Gonzales. “The speaker position didn’t come overnight. It took eight years to get here. It wasn’t something that we set out to do.”

In stark contrast to the many lawyers in the Legislature, Schexnayder trained as a mechanic and has owned and operated Car Craft and Rubber Company Automotive in Sorrento in Ascension Parish since 1998.

The 51-year-old representative graduated from French Settlement High School in 1989 and moved on to study automotive training and computerization at the Allen Institute in Atlanta, where he was certified in Automotive Service Excellence.

Schexnayder got into car racing in 1997, and his last race was in 2013, a year after he was elected to the House.

“I still have the racing bug,” he said in an interview. “Anytime I can go and sit down and watch a race or go to a race I’m there. I’m not a very good race fan because I like to participate, but yeah, I still love it.”

He reminisced on those days, even describing the first accident he was involved in during a race in Pike County, Mississippi.

“I was racing in a big race with a lot of people from all over the country that came to race,” he said. It was only the third or fourth race he had started in a type of car designed for dirt oval tracks. He participated in the Louisiana, Mississippi and Arkansas competition circuit, and in this race, “I was actually doing really well,” he said.

“We were running fifth and moving up with only a few laps to go, and we got into the front stretch, and I was passing a car, and the car that I was passing came up on me and his front tire went in front of my back tire. When it did, my back tire went on top of his, and it sent me airborne,” Schexnayder said. “I landed about 10 rows into the grandstands.”

Luckily, the fans were able to scatter in time.

“It was all good. No one got hurt,” he said. But it delayed the rest of the racing for the night until they got the fence fixed.

“It was a ride, let’s put it that way,” he said of his racing career.

He surprised even himself with his shift into politics, which started when a friend asked for his help.

Schexnayder described himself as “that guy in school that hated to talk in front of the class.”

“I was really quiet. I made straight A’s in conduct because I was so quiet,” he said. “I didn’t even read out loud in school. That’s just who I was. I couldn’t see me being a legislator.”

“I had my own shop, and I was just minding my business when one of my friends who was a sheriff came to me one day.”

Schexnayder described his most recent race in which he was elected Speaker of the House last year as “an ugly battle.”

“But that’s just part of it,” Schexnayder said. “You just have to deal with it and move on.”

Schexnayder gained traction by winning votes from across the aisle as the Republican with bipartisan support. His more conservative opponent, Rep. Sherman Mack, R-Albany, on the other hand, aimed to win with the majority of Republican votes.

“It was me and one other guy, Representative Mack, and the rest is history,” Schexnayder said of his last opponent left standing after the other potential speaker candidates were whittled down.

“We just started meeting with people and talking to people, and the day came when it was time to vote, and the vote went our way,” he said

Schexnayder won in a 60 to 45 vote, and he went from being number 69 on the racetrack to number one in the House.

Schexnayder said that he realized during his time in office that “usually the best elected officials are the ones that you’d never think would be in that spot. The ones who come in more humble end up being the ones who really make sure to understand.”

As the speaker, Schexnayder said, “Probably my biggest surprise is that it’s a full-time job even though it’s actually classified as a part-time job.”

He also still runs his auto-service business, and he builds homes.

Asked how he manages all this, he said: “It’s tough. It’s tough. Usually, I’ll try to go through and look at the house jobs that we have going on early in the mornings. I make my trips. My days start at 5 o’clock in the mornings most of the time, sometimes earlier, and then we’ll make our rounds and make sure everything is in place that the crews need and then I’m done for the rest of the day.”

He and his wife, Phoebe, have four children and six grandchildren.

So he hardly has the time anymore to enjoy his longtime passion for car racing.

“I haven’t done racing in a while.” he said. “I still have my race car. Racing was a huge part of my life, and I loved it.”

His first year as speaker also was a whirlwind.

“COVID hit and then three hurricanes,” he said. “We had to deal with some events that were just unprecedented. It was something new.”

Even with the obstacles thrown his way, Schexnayder said that the House legislators “put our boots on and went to work and got it done.”

“I think, overall, we did a great job as far as the House goes,” he said. “I think we came in, and we had an agenda that we set to go in and pass tort reform, something that hadn’t been done in,well, ever, at the capitol. The new group that we had there as far as legislators did a great job coming together as a team during a very, very tough time.”

He also is expecting an easier session when the Legislature reconvenes in April. With all the federal coronavirus aid, he said, it should not be hard for lawmakers to craft a new budget, and Louisiana residents will start spending more as they receive their next stimulus checks.

He said the distancing restrictions during the pandemic have been “tough on a lot of people.”

But, he said, “I also think it helped save a lot of people. Hunkering down, seeing what would happen, and going from there really helped.” He also said that the political tension over the restrictions has simmered down.

“Here’s the thing with that, I would much rather err on the side of caution than not,” he said. “If you look at some of the people these past couple of months or so, you’ve probably known more people personally who’ve had COVID than you have the whole pandemic.”