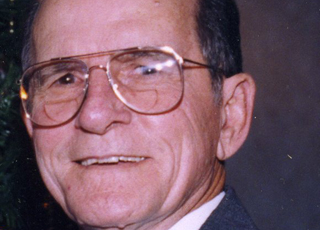 Murphy was born Nov. 12, 1922 to Natalie Soileau Carrier and Murphy Carrier Sr. in Palmetto. He graduated from Minden High School and was married to Marie Anderson Carrier from 1942 until her death in April 2009. He proudly served his country during WWII in the Asia Pacific Theatre in the Southern Philippines, Bismark Archipelago, New Guinea & Luzon. During his service he was awarded two Bronze Stars, Merit Unit Award, Bronze Indian Arrowhead, God Conduct Medal, APTO Medal and Purple Heart.

We would like to express our sincere appreciation to all of the staff and employees of Heritage Manor Stratmore, where he was known as Mr. J.C., for the wonderful care and kindness shown to him and our family during this long battle with Alzheimer’s. We couldn’t imagine facing this dreaded disease without your loving care, guidance and understanding. Also thank you to Life Path Hospice for the compassionate care and guidance you showed us during these last few days.