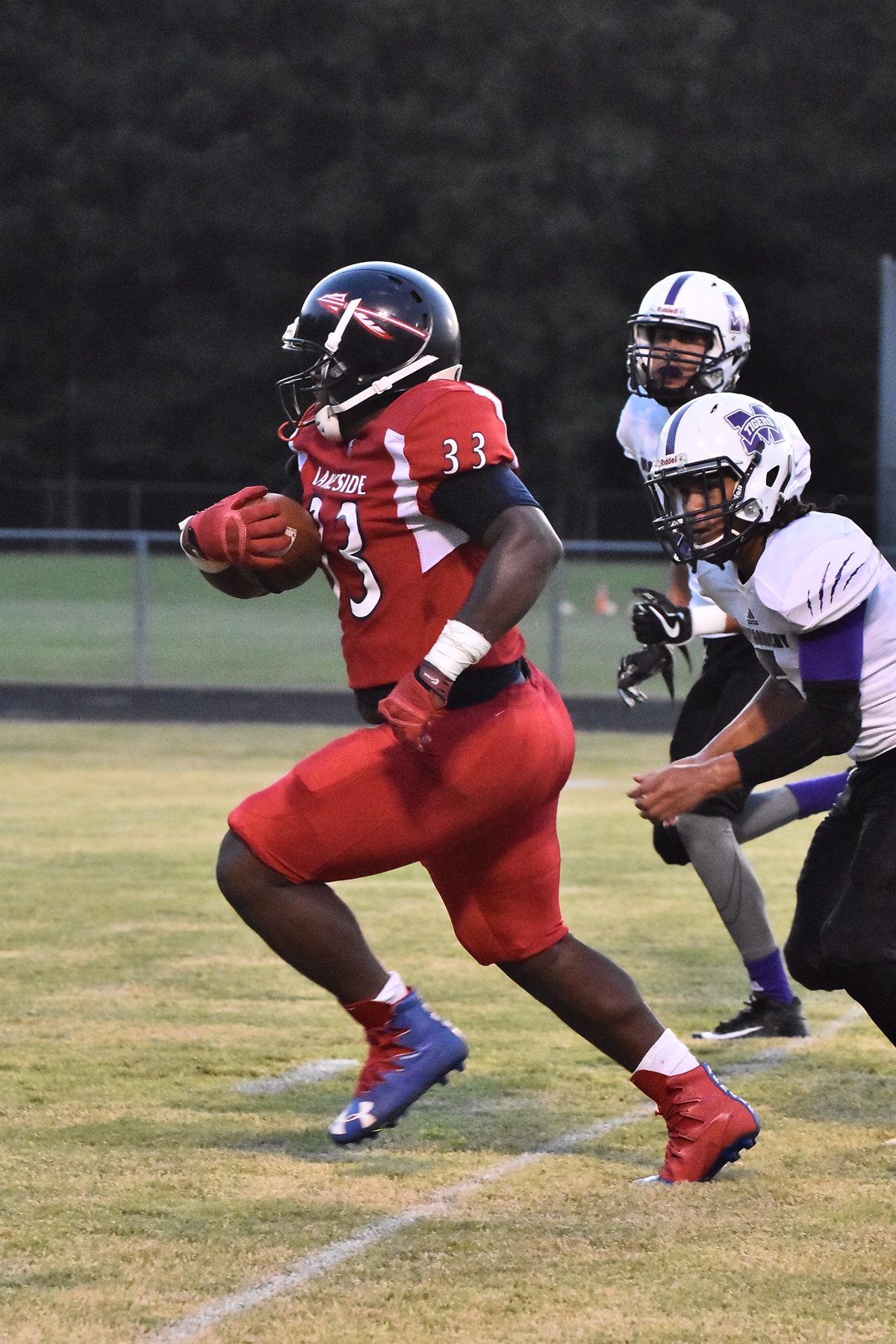 SIBLEY – The officiating was suspect, the play was awfully chippy and the start was a little sloppy.

Flags flew all night in Sibley as the matchup between the Warriors and Tigers didn’t end until 10 p.m.

Whether they were all the right call is a matter of opinion. What can be factually stated is that Lakeside (2-0) was much better than Montgomery in Friday night’s 38-14 win to open the home schedule.

“I’m proud of the result,” Lakeside head coach Jason McClendon said. “Proud of our coaches and our players. A lot of our adversity was self-inflicted in the first half. We overcame that. I’m really glad what happened, happened. We needed adversity because we didn’t experience any last week. This will help us going forward.”

The Warriors weren’t firing on all cylinders in the opening quarter as Montgomery jumped out to an early 8-0 after a special teams blunder set them up with good field position.

On the next drive, Lakeside inserted Brian Jackson Jr. at running back and the 6-foot 245-pound monster took over the game. Jackson rumbled for 12-yards on his first carry and then took his second 38-yards to the house as the Warriors pulled even at 8-8.

Right before the half, Jayke Stewart rumbled into the end zone from 2-yards out, capitalizing on a Tyrese Miles interception, to tie the game and Lakeside took the lead at 16-14 with a Jackson 2-point run.

The Warrior defense came out of the break focused and shutout Montgomery behind the play of Jackson, Jayke Stewart and Tanner Stewart. When Montgomery did have time to throw, the receivers had a tough time getting open against Miles and Tyreke Loftin.

“We didn’t play defense the way we needed to in the first half,” McClendon said. “Our defensive ends were getting sucked inside by their zone stuff, but once we fixed that we started playing better. Our defensive line stopped their run game and our secondary is pretty athletic.”

The fourth-quarter saw heavy doses of Jackson, who finished with a team-high 95 yards and a touchdown, and Buffate Coleman in the backfield, ripping off chunks of yardage against a worn-down Tiger defense. Jackson’s influence on both sides of the ball was noticeable, as he continues to emerge as a star for the upstart Warriors.

“It’s pretty hard to stop him,” McClendon said. “He is a special, special talent, and the incredible thing is he’s only a sophomore. He’s a great kid and he’s getting a lot better as a man; God has gifted him.”

It wasn’t just Jackson. All of Lakeside’s weapons were involved.

Gavin Jones had 3 catches for 77 yards and two touchdowns and Chase Mitchell led the team with 6 catches for 92 yards.

Branthony Brown made a great catch on a deep ball for a 41-yard gain and Coleman carried 13 times for 79 yards. Most importantly, sophomore QB Jordan Preuett threw for 226 yards, totaled 3 scores and showed poise on a night where it would have been easy to lose it.

“He did a good job staying within himself,” McClendon said. “He’s showing maturity, both mentally and emotionally, and he made some key throws.”

Lakeside will hit the road Friday to take on Beekman Charter School (0-2).