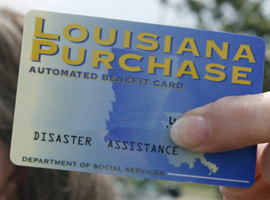 A proposal by Rep. Jay Morris, R-Monroe, would require legislative approval to seek a federal waiver of the work requirements for thousands of “able-bodied” childless adults who receive food stamps.

The House health committee backed the bill Wednesday, sending it to the full House.

The Edwards administration said it has concerns about the proposal, which it suggested is unnecessary because the Democratic governor is drafting
an executive order aimed at making changes to Louisiana’s food stamp program.

For 19 years, Louisiana has had a federal waiver of a requirement that childless adults ages 18 to 49 work 20 hours per week or be enrolled in a job training program to receive the food aid. Edwards got federal approval to keep that waiver in place.

Republicans have criticized Edwards’ decision, saying the food assistance should only be a short-term safety net.

“We’re a hard-working state, and I think we need to continue to incentivize work,” Morris said. “Not getting up and doing something is just bad for the brain and bad for society.”

“We’ve been working on an executive order that we will be rolling out in the next couple of weeks to address this very issue,” Block said.

Morris said the governor’s order might make his proposal moot, “but until we see what’s in it, I wanted to move forward with the bill.”