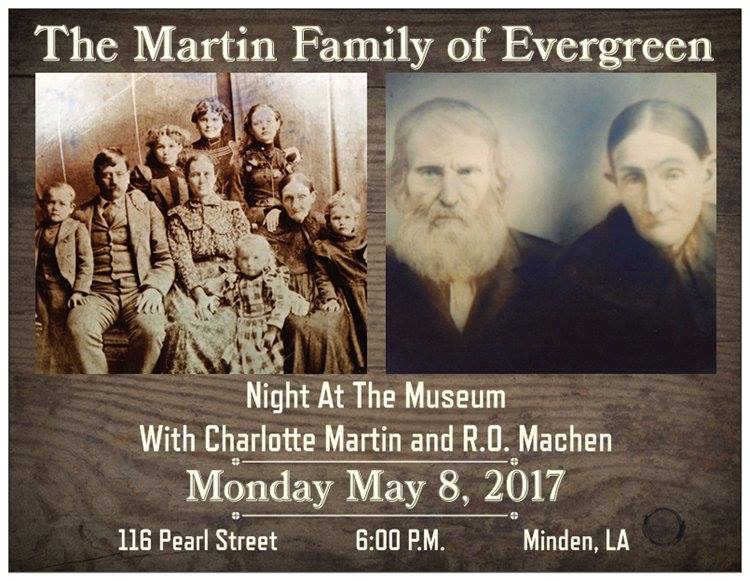 The rich history of the Martin family of the Evergreen Community will be the topic of this month’s Night at the Museum.

Charlotte Martin, along with R.O. Machen, will be a part of the 58th oral history program for the Dorcheat Historical Association Museum and the 64th museum event.

Martin will tell the family’s history from her late husband’s perspective. Arthur Dowd Martin became a part of the Martin family at 5-weeks-old, when he was adopted by Clara and Arthur Martin. He was born in Shreveport and graduated from Evergreen High School in 1953.

Charlotte Smith Martin was born in Minden and graduated from Minden High School. She became a Martin in 1956.

They lived in the Evergreen Community at A.D.’s old home place most of their married life. They raised three sons, Art, David and Carlos, who live and work in the Minden area. They have two granddaughters, six grandsons, two great-granddaughters and two great-grandsons.

Martin enjoys researching and learning about the family’s history.

R.O. Machen Jr. was born in 1942 in Springhill. He moved to Minden when he was in the fifth grade.

His father, R.O. Machen Sr. became the assistant superintendent of Webster schools that year, which prompted the move.

He is a 1960 graduate of MHS, and later graduated from Louisiana Tech University in Ruston in 1964, with a bachelor of science degree in accounting. His banking career began immediately after graduation when he went to work for Louisiana Bank in 1964 and People’s Bank in 1967. After 47 years in the banking industry, he retired in 2010 from Gibsland Bank and Trust.

He married Barbara Fountain, a Homer native, in 1979. The couple has five children, 15 grandchildren, and so far, three great-grandchildren. Barbara Machen works for the State of Louisiana in the Child Welfare Division and will retire this year.

The museum events are held in the media/learning center at the museum, located at 116 Pearl Street.
Doors open at 5:30 p.m., with first-come, first-serve seating. The program begins at 6 p.m.

Admission is free with potluck desserts and snacks welcome.