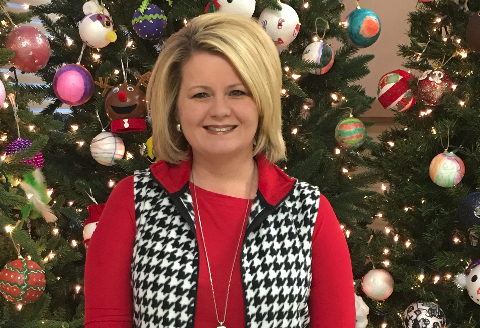 Michelle Finley has been tapped to take the principal’s position at J.L. Jones Elementary School.

She will take the helm following the Christmas break, and she is excited about the position, she said.

“I am very excited about being selected as the next principal of Jones Elementary,” she said. “(Dusty) Rowland has recruited a very talented staff and did an outstanding job as principal. There are so many innovative things already going on at the school.
It is both an honor and a privilege to get to follow in her footsteps.”

Rowland is leaving the Jones position after six years to go to Central Office, where she will be the elementary supervisor. She said she is proud to have Finley take the lead at Jones.

“I feel like I am leaving them in good hands,” she said. “Once I learned of Finley getting the job, reality began to set in. This will be my last week at Jones. I am so thankful for the time I had there and spending it with all those I call my family.”

Finley will have some big shoes to fill, although she has been working with the staff, students and parents for the last 14 months as the school building level committee coordinator. She worked with a team that meets once per month to discuss student issues and make decisions on the steps to take next.

She served as the assistant principal at Lakeside Jr./Sr. High School for two years before her husband, Denny Finley, was named principal. She was reassigned to Jones and J.A. Phillips Middle School as the part-time dean of students and as the SBLC
coordinator.

Before her time at Lakeside, she served as the staff development coordinator for Webster Parish and a classroom teacher for eight years.

Finley said she decided to apply because she was already working at Jones with the students, parents and staff.

“I look forward to working with the Jones team to provide a successful and rewarding experience for our students,” she said.