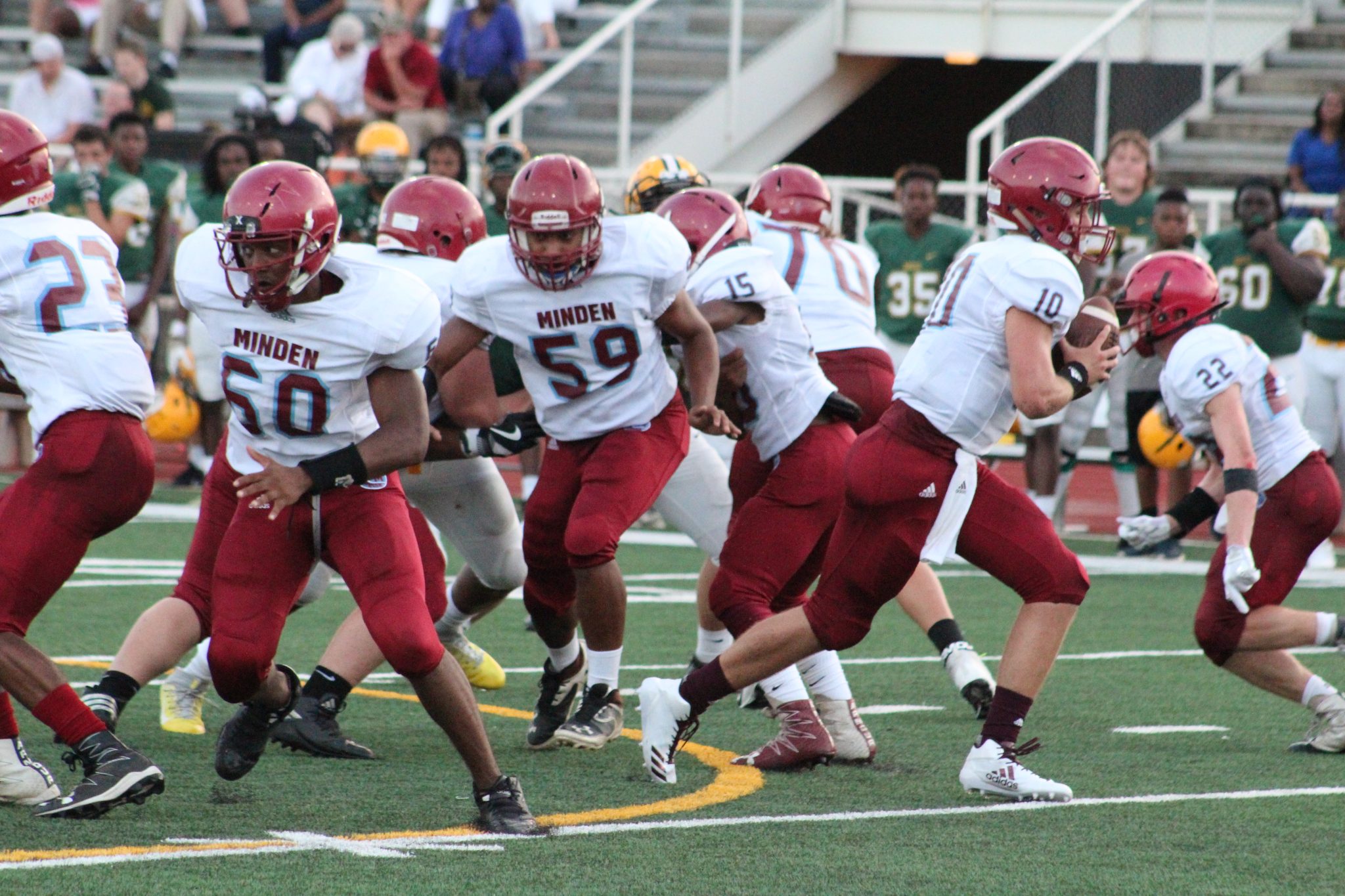 SHREVEPORT – When Minden left the field last Friday at Independence Stadium following a poor performance against Airline, the Crimson Tide players walked off the field in silent disappointment.

Thursday at Lee Hedges Stadium, the Tide, alongside a giddy head coach in Spencer Heard, whooped it up in the postgame huddle, celebrating a high-octane and hard-hitting display of offense and defense against host Captain Shreve.

The Tide outscored the Gators 13-10 in one live quarter of action and scored three touchdowns in goal line situation compared to one for Shreve.

Minden quarterback Seth Tyler had a phenomenal outing, keeping the Tide turnover free and executing Heard’s offense with ease, save for a couple hiccups on quarterback-center exchanges.

Tyler used his legs to pickup one Minden first down and hit a few big plays in the passing game, including an over-the-middle deep ball to wideout Marcus Smith. He also showed improved feel for the Tide’s screen game, hitting Decorian Brim and Patrick Heard for big gains throughout the night.

Brim was the offensive star of the night, scoring twice – once through the air and once on the ground – and displaying the speed and wiggle that Heard has harped on all summer.

“That’s the player I’ve always thought he could be,” Heard said. “When he gets out in space he has a lot of wiggle, he has good speed; he’s a guy that, if we can get the ball in his hands, he can make things happen.”

Patrick Heard was his usual self Thursday, shaking tackles and leaving defenders in the dust. During goal line play, Heard scored his only touchdown of the night when he took a speed sweep heading left and made two Gator defenders miss in the backfield before spinning off a third would-be tackler to go in for the score.

Wideout Lemoris Jackson Jr. made a good impression, corralling a trio of tough catches for Tyler and moving the chains for Minden twice. Most importantly perhaps, the Tide’s starting offensive line gave Tyler plenty of time to scan the field and opened holes for the running game.

“We shored some things up this past week,” Heard said. “Seth didn’t have a guy in his face all night, and he did a good job of calming down. He made some beautiful throws.”

Late in the game, Minden’s physical running back duo of Zack Gage and TJ Arrington feasted on a worn-down Shreve front seven, rattling off first-down carry after first-down carry to close out the contest.

As pleasing as it must have been for Heard to watch his offense roll, the Tide’s head coach seemed more impressed with the way his defense finished the night.

The unit began the night slightly timid, but an early ear-full from defensive coordinator Alan Ensminger seemed to light their fire for the rest of the contest. With Britton, Braxton Jackson, Tamerion Phenix and the rest of Minden’s front seven shutting down Shreve’s running game, the Gators went pass-heavy down the stretch, leading to the Tide’s first sack of the night when Stefan Wheeler got to the quarterback on a third and long.

“I thought the secondary played very well,” Heard said. “They got us a couple of times over on the right side. We’ll try to fix that, but overall it was good. (Jecareon) Lathan came up big with a pick, we got a really good push up front tonight and I thought our linebackers fit well. Bobbie Britton made vast improvements from last week just trusting his eyes, making his reads and flying to the ball.”

Brim scored both of Minden’s TD’s in the live quarter; Heard had one of the goal line scores with his dazzling run; Marcus Smith made a smooth sliding catch in the corner of the end zone on a well-placed ball from Tyler for another goal-line score; Tyler finished the dominant period for Minden with a 3-yard score with a nice read and pull on a triple option.

Next up for the Crimson Tide is the Pineland Jamboree Friday Aug. 25 at Haynesville’s Red Franklin-Memorial Stadium where the Tide will matchup with their Webster Parish counterparts in the North Webster Knights and Lakeside Warriors.