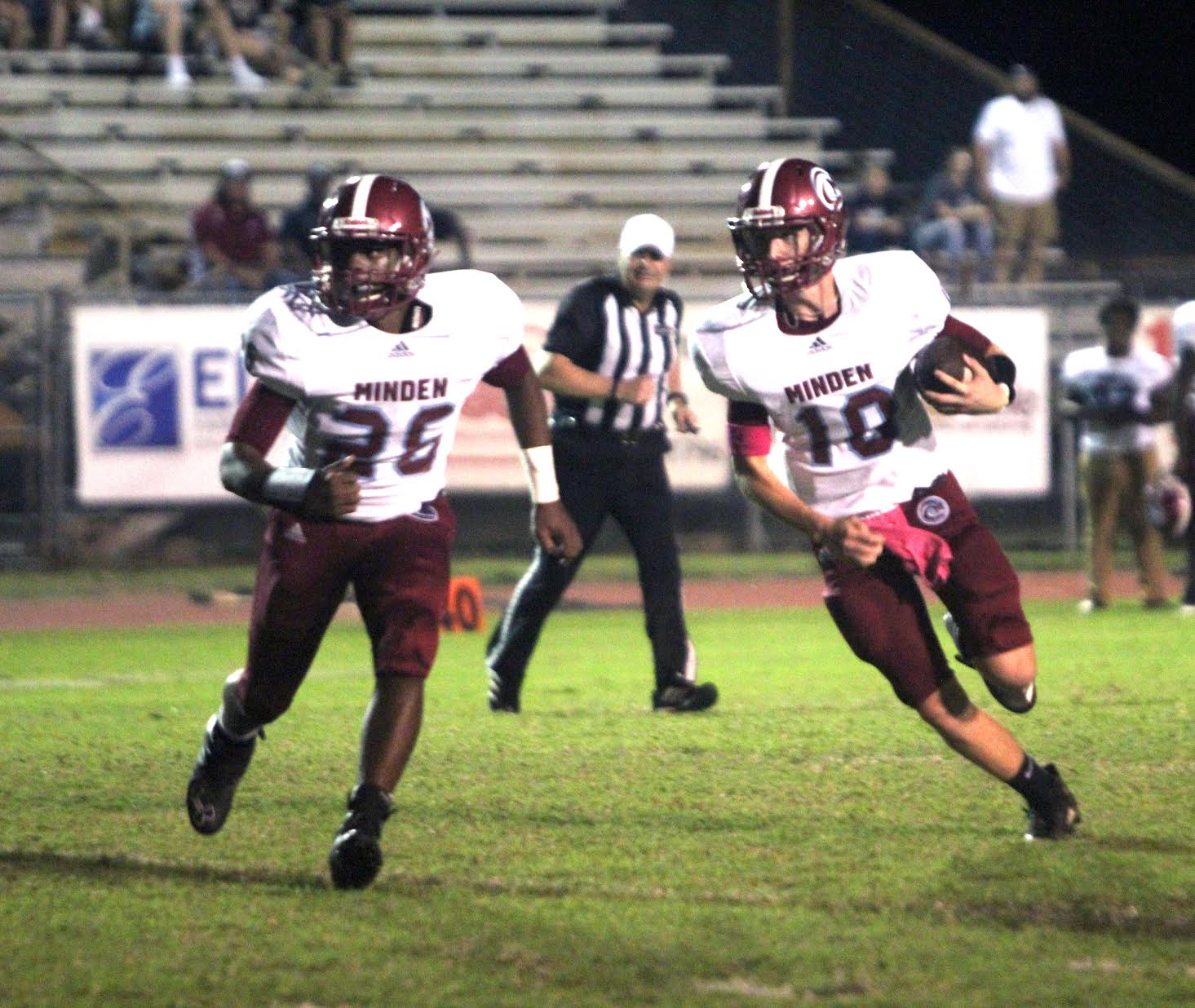 Minden had all the momentum and seemed to be poised to pick up a massive district road victory.

A few questionable calls later, and Benton had taken the victory right from the Tide.

“I’ve never spoken about a referee in my life,” Minden head coach Spencer Heard said. “But those referees took that game from our kids.”

Few observers from the Tide side could see anything else from the loss other than that everything seemed to go the wrong way for Minden after being up 23 to 13 with five minutes left in the game.

“It makes me sick to my stomach,” Heard said about the officiating.

Minden’s defense dominated most of the second half. With 8:02 left in the third quarter, AJ Lister returned a fumble for forty yards and a touchdown that put the Tide up by ten.

“I don’t think our defense could have played much better,” Heard said. “They were incredible tonight.”

Minden’s defense came up with a number of hard hits and big stops that kept them up ten through half of the fourth quarter.

Benton finally scored with a 35-yard catch by Legend Denler that brought the Tigers back to down three points with 4:54 left in the game.

Jacareon Lathan returned a kickoff back to the Benton 40-yard line when things really started to take a turn.

Minden had already been on the receiving end of a few tough calls, but when the Tide were flagged for a phantom offside call, Minden coach Spencer Heard marched onto the field and questioned the referees.

Flags flew in the air and the referees escorted Heard back to the bench, where the head referee and Heard had a conversation.

“So I went onto the field a little to try and get an explanation. All I was told was that, ‘Oh, it must have been the offensive tackle who was offside then.'”

All of the penalties pushed Minden back into an impossible second down and more than 25 yards. Benton’s Jayree Anderson intercepted quarterback Trent McLaughlin on the next play, and the Tigers had the ball on the Minden 39-yard line. After another pass to Denler brought the Tigers inside Minden’s red zone, Alonzo Combs looked to have come up with a sack and a fumble recovery. The play was ruled an incomplete pass as Benton quarterback Ken Gay was deemed to have been in a throwing motion when he was hit on the arm during the sack.

“I’ve seen it on the film, his arm was back and it was an obvious fumble,” Heard said. “It was a terrible call. I saw one referee calling a fumble while the other said incomplete.”

Gay found Legend on the next play for a 12-yard touchdown pass that gave Benton their first lead of the second half, 27-23, with 1:18 left in the game.

McLaughlin was intercepted by Jeremy Hall on Minden’s next possession, and the game was over.

Jordan Preuett pulled a rabbit out of his hat, throwing touchdown after touchdown to bring Lakeside back from down 17 points in the second half.

Preuett threw for five touchdowns on the night, and led the Warriors to their first district win of the season. Many of the touchdown passes were for more than fifty yards.

Lakeside improves to 5-1 overall, and 1-0 in district play.

Logansport remains undefeated as the Knights drop their first game in weeks.