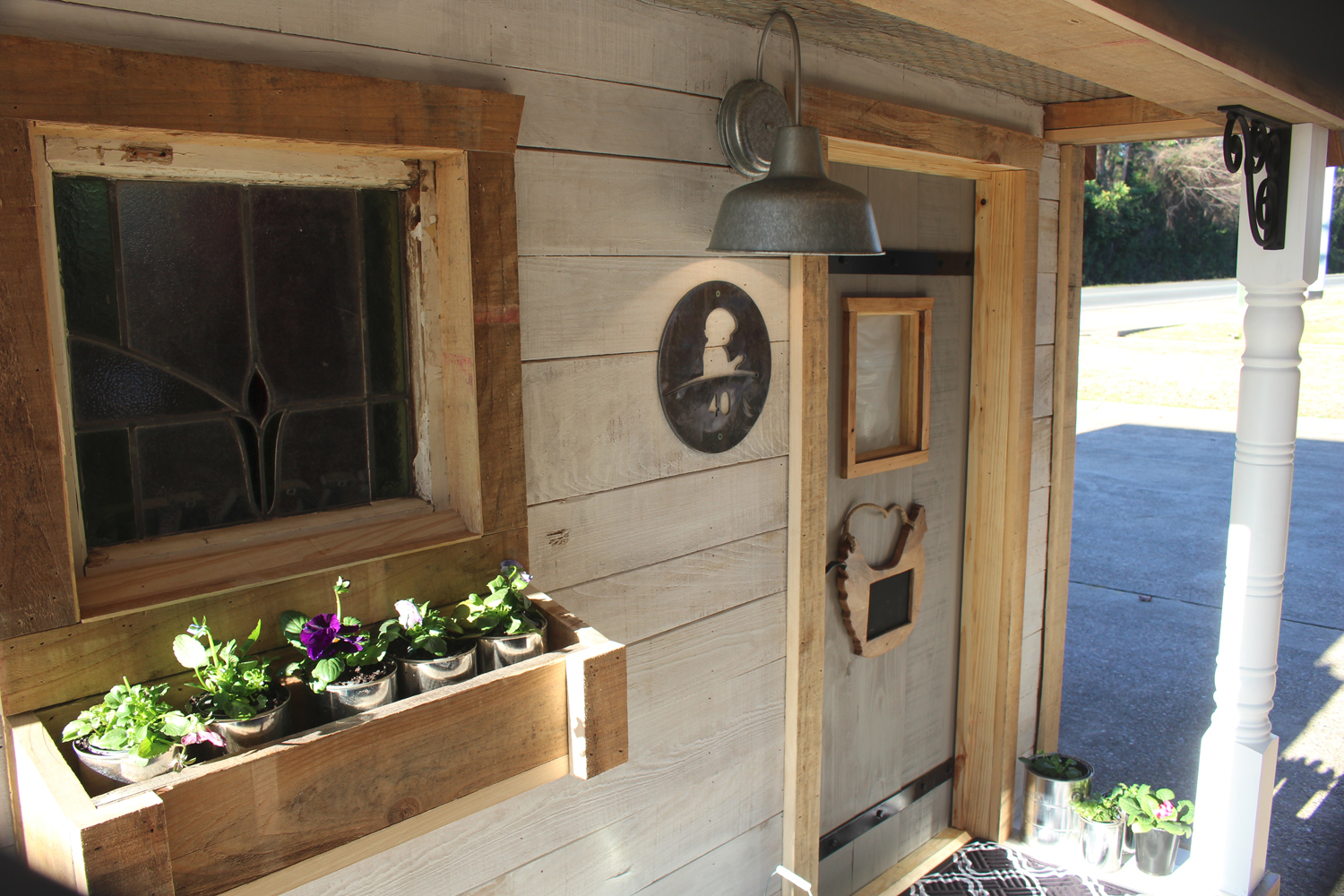 Driving down Sheppard Street, motorists will notice a little white farmhouse in the middle of the Minden Fire Station’s driveway.

That’s the famous Minden St. Jude Playhouse that will go to the lucky winner who can enjoy arts and the imagination for years to come. Laura Spillers and Haley Robinson took the reins of the playhouse committee from longtime chair Jenny Mourad this year, and went back to the basics – building a playhouse fit for any child’s imagination.

“With it being our first year, we wanted to keep it basic,” Spillers said. “We know we have big shoes to fill.”

The concept of the playhouse is the “Dreamers Farm House,” with the theme from the classic movie “Wizard of Oz.”

“The night the campers were being auctioned, we were told what the theme for it was going to be for this year, and normally that doesn’t happen,” Spillers said.
“They knew for the 40th year, they were going to do ‘Wizard of Oz.’ We started coming up with ideas and Corey Plunkett (Minden firefighter) even got his sketchpad out and started drawing ideas.”

The house comes equipped with a kitchenette, complete with sink and refrigerator. It has plenty of room for kids to get down in the floor and play, or they can sit around the custom-made table with all the art supplies they need.

Just inside the door to the left is a little table with stools and above the head is a loft where kids – or adults – can lounge and relax.

Spillers and Robinson say the “Wizard of Oz” theme can be seen all throughout the house, with sequined pillows on the pull-out bed to represent Dorothy’s ruby red slippers, representations of the Cowardly Lion, the tin roof represents the Tin Man Who Didn’t Have a Heart and Toto is front and center when patrons first walk inside.

Just inside the door, on the underside of the loft is the yellow brick road. Painted inside each brick are the names of past and present St. Jude patients – angels and survivors.

“The idea of the outside of the house is it’s monochromatic (black and white), like the beginning of the movie,” Spillers said. “And when you walk in, it’s full of color, like when Dorothy went to Oz.”

“We wanted to create somewhat of a gender neutral art space for whoever may win it,” Robinson said. “It’s a great place to be artistic and just use your imagination.”

The walls inside start out as an emerald green, stained, to represent Emerald City, and the loft has the original emerald green color.

“Our art table is a tribute to the rainbow, and we painted the planks of wood, and Marty Glass cut up the wood and made it into a table for us,” Robinson said. “He also made the front door from scratch, and that’s a pretty tedious process. He also made the light fixtures.”

Underneath each window is a planter box, each one to fit the plants inside. The pansies and primrose are planted in paint cans, donated by Tony Hall. Spillers says the idea of planting them in paint cans is to make them mobile so they can be replanted.

Because of its rustic, farmhouse feel, Minden Farm and Garden donated a chicken coop, along with six chickens and all the materials needed to take care of the animals, Robinson said, making a nice addition to go alongside the farmhouse.
The co-chairs say this is the biggest and heaviest playhouse to date.

Spillers and Robinson call the Minden Fire Department the true “backbone” of the project as they built the playhouse, many on their off-duty hours.
“They put their hearts in it,” Robinson and Spillers said. “They deserve all the recognition and credit, but they don’t think so.”

The two say they have developed a true bond throughout this project, and they thanked Mourad for choosing them to head up the committee.

“When she asked me to help with the campers next year, she had already picked Haley to put us together,” Spillers said. “We knew each other in passing, and it has been wild how good it’s been. It’s crazy how she knew we would be perfect together.”

“She knew exactly what she was doing,” Robinson said of Mourad.

As for the playhouse, Robinson and Spillers say they love it, and they want everyone to love it as much as they do.