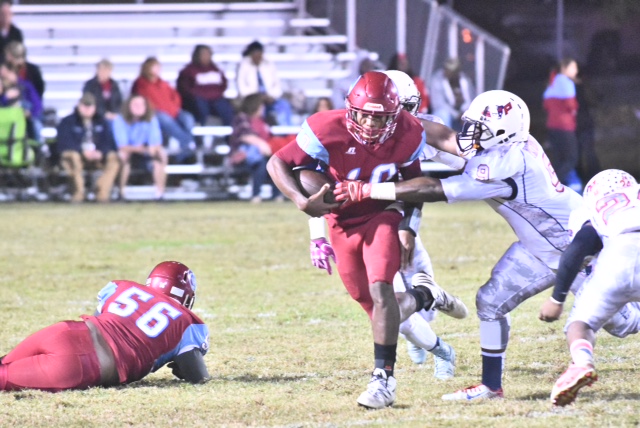 Minden is two wins from reaching the state championship game and playing in the Mercedes-Benz Superdome.

The bar will be raised once again this week for the quarterfinals, as the Tide will do battle with the Warren Easton Eagles from New Orleans.

The Eagles (9-4) are fresh off an impressive win of their own last week at Tioga. Easton held the No. 4 team in Class 4A on fourth down to hold on for a 26-23 victory.

The Eagles played in arguably 4A’s toughest district, with two of their four losses coming to district foes McDonough #35 (No. 3) and Edna Karr (No. 2).

“They’re very athletic,” Minden head coach Spencer Heard said of the Eagles. “But that’s to be expected in the quarterfinals. It starts with their quarterback. He’s a great athlete. He throws the ball well in their spread, so it’s a similar type of thing we’ve been seeing, as far as schematically. They’re pretty big up front, the offensive line is a different type of big than Woodlawn.”

Heard also warned of the speed Easton boasts on defense. Minden wasn’t able to get the edge last week with Patrick Heard, settling for a more methodical ground game with Antonio Rivette, Kolby Jackson and Jamin Oliver leading the way.

Against the Eagles, the Tide will have to find ways to counter a faster team for the fourth-straight game.

“Defensively, the athletes aren’t just in the secondary, they’re in the box too,” Heard said. “They have one kid who is really big in the middle, I think their nose guard. It’s going to be a challenge for our offensive line. We’re going to have to do a good job of firing off the ball and staying low.”

It’s been 10 years since the Crimson Tide found themselves in this position: hosting a playoff game on Thanksgiving weekend.
The last time that happened, Minden defeated the Neville Tigers in thrilling-comeback fashion to keep their then undefeated season in tact in front of one of the largest crowds the old grandstands had ever seen.

Heard knows the atmosphere could be similar Friday night when the Eagles come to town.

“I’m sure as the week goes on the moment and excitement is only going to build,” Heard said. “It’s the first time we’ve been able to play on Thanksgiving weekend since I’ve been here, so that’s a milestone, if you want to call it that. But I know this community is excited and I know the boys are ready to get out there.”

The Crimson Tide’s Thursday walk-through will have an extra dimension this week, as Minden fans have organized an open practice to support the team the night before the biggest Minden football game in a decade.

Hot chocolate will be served for those in attendance.