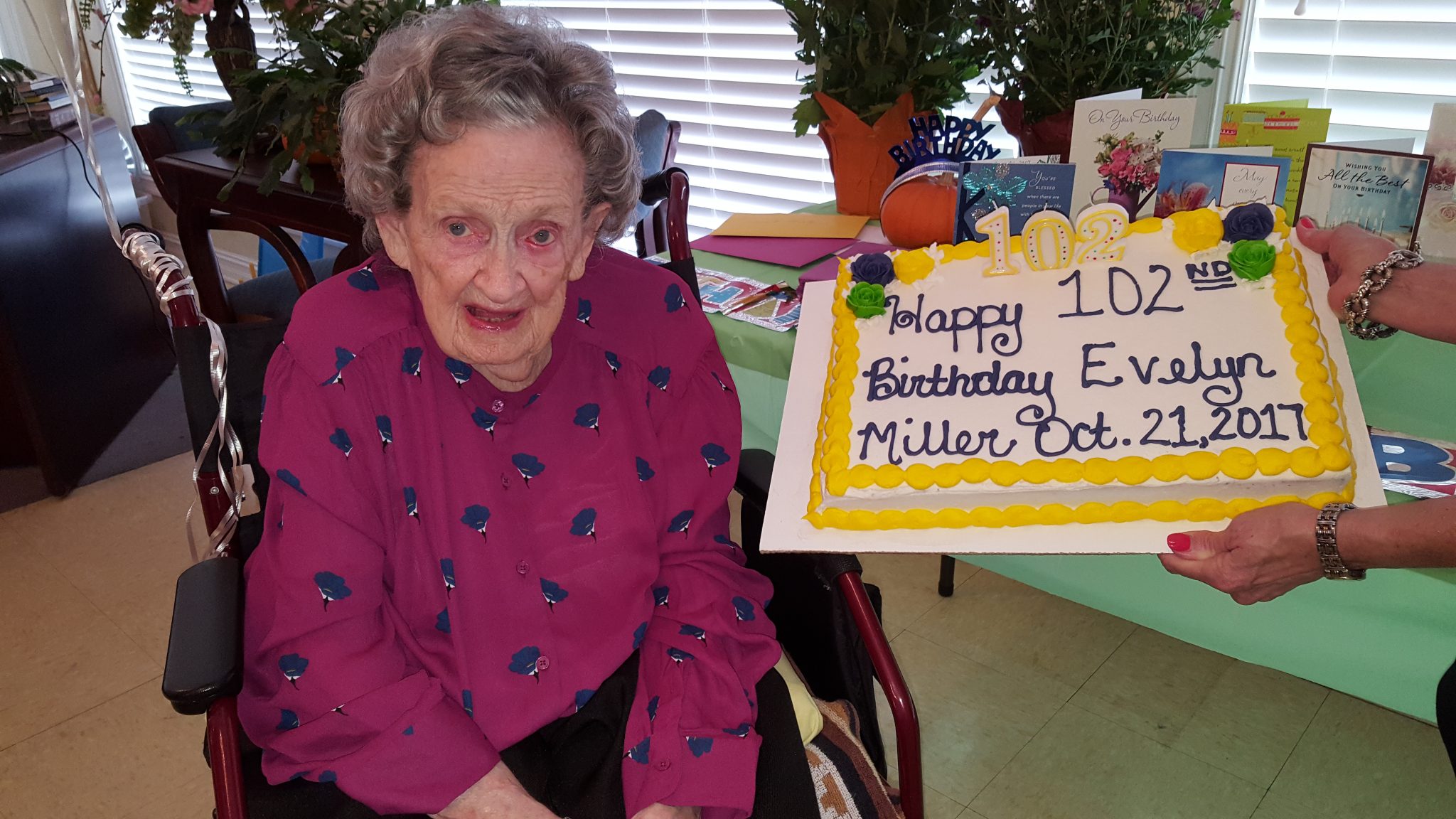 Sally Evelyn Henry Miller marked her 102nd birthday on Saturday with a large gathering of her family and friends at Savannah Court in Minden. Hostesses were her nieces, Marilyn Miller, Wanda White Fields and Brenda Miller Reeves.

“Aunt Evelyn” was born Oct. 21, 1915 on a large farm in Heflin, Louisiana, the youngest child of M.C. and Nora Fuller Henry. She had one brother, Calhoun Henry; and two sisters, Mrs. Eunice (C.V) McCollum and Mrs. Eula (Jack) Stanfield. M.C. Henry donated land for the location of Adams School, which Aunt Evelyn attended until she entered high school. She graduated from Heflin High School after grade 11, and soon after began a work career which spanned over 50 years. In the late 1930’s, Evelyn married Floyd (Abe) Miller of Evergreen. Lt. Miller served in the Pacific Theater during World War II. While living in Springhill, LA, Abe worked for International Paper Company, and later as QC manager at the Louisiana Army Ammunition Plant. In the 1940’s, Evelyn went to work for the West family at West Bros. in Springhill, where she retired after 45 years of service. The Millers had no children, so they bundled and shared their love with their nieces and nephews, great nieces and nephews and even great, great nieces and nephews.

Their home was always full of the cooking aromas from fresh vegetables and fruit from “Uncle Abe’s” award-winning garden. Aunt Evelyn used her spare time to sew for the little ones and big ones alike. In the late 1980’s, after Uncle Abe became stricken with Parkinson’s, the couple relocated to Minden. They resided on Cline Street until his death in 1996. Aunt Evelyn later moved to Louisiana Avenue, where she resided until moving to The Arbor (now Savannah Court) in 2008. A child of the Great Depression and two World Wars, Aunt Evelyn always had a project going that would make use of something she had saved.

She wasn’t a hoarder, but she could “re-purpose” with the best of them. For many years, she was very active with the Webster Parish Council on Aging’s Senior Citizen’s Center. And when she was able, she was doing something for someone else, whether it was sewing, buying goods from her daily excursions to area stores, helping with a loved one’s home repair, or canning fruit from her own trees.