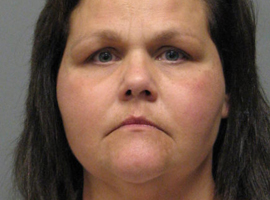 A Minden woman found herself in trouble with the law after reportedly failing a series of field sobriety tests.

Nancy Marie Sanders, 48, of the 400 block of Cotton Lane, was arrested Wednesday, Oct. 14, and charged with driving while intoxicated (first offense) and open container. Bond was set at $1,300.

According to reports, Webster Parish Sheriff’s deputy John Lewis Jr. was dispatched to the intersection of Highways 79 and 518 in reference to a vehicle swerving in the road. Upon arrival, he found a white Jaguar, still running, parked on the side of Highway 79.

Upon making contact with the driver, identified as Sanders, reports indicate he smelled a strong odor of alcoholic beverage coming from her person. Once he was able to wake her up, she appeared to be confused, police say.

Sanders was asked to step out of her vehicle and nearly fell twice trying to walk to the back, according to reports.

Lewis conducted a series of field sobriety tests on Sanders, to which she performed poorly, police say. Her eyes appeared to be bloodshot and glassy.

Following the tests, Sanders was taken into custody on the above charges. A search of the vehicle revealed, in plain sight, a Styrofoam cup, to which police say she admitted to it containing an alcoholic beverage.

She was transported to Bayou Dorcheat Correctional Center for booking.