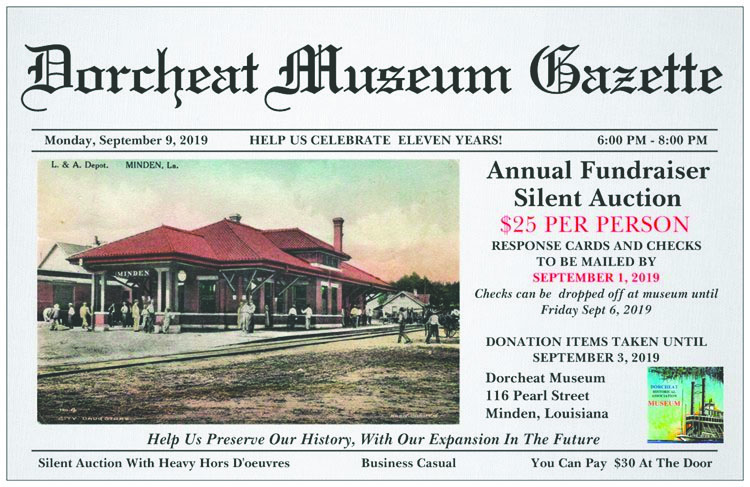 This week’s column will be somewhat different, still historical, but a little bit personal. I will begin with a copied article from Minden’s past that was brought to my attention by Dorcheat Museum Director Schelley Brown Francis. The words come From the Minden Press of Monday, November 10, 1958. sixty-one years ago. An editorial written by Major DePingre regarding the need for Minden to create a museum. Reading the editorial, I can tell Major had been discussing the issue with Mrs. Paul Campbell, as some of her major interests are clearly articulated. Let’s examine Major’s work and move forward in light of where we stand today.

“A Museum For Minden

“Cheneyville is the most recent small town of Louisiana to announce plans for a museum. Recognizing the importance of preserving its historical heritage for future generations, and of saving something of the beauty and serenity of a period where gracious living demanded hand-carved furniture and galleried homes, rather than glass houses and fast transportation to someplace else, the Cheneyville Community Development Association intends to convert the old Crescent Plantation into a museum and a park. The antebellum plantation house, which has remained in possession of the Marshall family since its construction, still contains original furnishings. Civil War skirmishes were fought nearby.

“Probably not the least of the Cheneyville Development Association’s aims is to provide a tourist attraction in a section not hitherto publicized as an historical area. Tourist attractions draw tourism, and tourists spend money, this has been proven repeatedly, and the trend in recent years has been for the tourist to travel to the places of his beginnings – to link himself with his own and his country’s past.

“Why can’t Minden have a museum? Homer has a museum. So has Mansfield. Dozens of other towns of the state have museums or reconstructed historical buildings. Minden has a place of historical importance – Germantown, but it is going to ruin. In the Minden City Hall is the first piano brought to North Louisiana. It is there because there was no place else to put it when the Library, where it was formerly housed, needed the space. One day it will be decided that the piano is in the way in the city hall and the instrument will be shunted to the basement and

“Also, there should be a Minden bell that tolled for classes at North Louisiana’s oldest college, the Minden Female College, and served for generations of high school and grammar school children thereafter. The bell was saved from the scrap heap by L. L. Greer, who purchased it, and presently is on loan to the bell collection of Herbert Ford in Homer.

“A made-to-order building that might have housed the piano and other mementos of Minden’s past was the 100-year-old Holmes house which was razed some months ago to make way for a post office. One by one, Minden’s antebellum and early post-bellum houses have disappeared in the name of progress. Someday future citizens may wish for a Rockefeller to build here another Williamsburg, or a Dupont to buy back the furniture and pictures and mantle pieces to provide a museum, but it would be more feasible to save what is here now.”

Major’s desire for a local museum was shared by others concerned about preserving Minden’s history. Some of Major’s goals were achieved, the bell was saved to become the Victory Bell at Minden High School, the piano, ended up with the Ford Museum in Homer. Along with Major, I think of the “giants” of local historic preservation, most of whom I had the pleasure of knowing in my youth. Thomas Lorraine Campbell (and later her son Richard), Gay Stewart Wren (and her husband Marcus), Roy Miller Inabnett, Beth Drew White, George Turner and others who worked toward a museum for Minden. They were instrumental in creating the Dorcheat Historical Association and Museum in the mid-1970s and taking tentative steps on several occasions toward opening a museum. There was an ill-fated attempt to repurpose the old Drury Murrell Home (Green-Kleinneger Funeral Home) as a Museum, aided by the Minden Jaycees and Charlie Odom, ended by a tragic fire. Then a more substantial effort was launched, using the old Crichton Hardware building as the home for the museum. While this attempt was more successful, we did open for several years, the museum struggled, hanging on by a thread, without day-to-day management until we lost the lease. In the early 2000s, things began to change. Thad Andress assumed the leadership of the association and began pushing for contributors and funds to firmly establish a museum. Thad hired Schelley Brown (now Francis) to be the hands-on director and the magic began. Through their leadership a new building was obtained, ironically the former home of Major DePingre’s office supply store. The association was able to purchase the building, ending the threat of eviction. Larry Milford provided his genius for design on the museum exhibits and we now have the best small-town museum in the state and probably the region. If you have not visited the museum, you will be amazed to see what is housed behind those walls. Visitors are stunned at the quality of the displays and the story they tell. Beyond the physical exhibits. Schelley instituted a program “Night at the Museum” which features speakers who cover all areas of our heritage. Those events have developed a devoted following and pack crowds into the museum. The museum also offers its meeting room for local organizations to gather together.

Thus, I have had the chance to see the dream partially realized. Sadly, most of those local giants of historic preservation didn’t live long enough to see the goal fulfilled. I know they would be so pleased to see how their dreams have been realized. As I face the dwindling days of my own time here, I looked around and wondered what I would like to see happen. What would be my future dream for our museum? There is one obvious opportunity that I want to speak about for a bit. A few years back the museum was able to purchase the neighboring building on Pearl Street. For now, it lies unused, but not unconsidered. Schelley has given me a long, long list of exciting exhibits and themes that she wants to include in that new section of the museum. She and I and others are working on what will be included in that space as we speak. We have a display focused on local education but have so much material we need to expand the exhibit on that topic. We have a sports case, but it barely scratches the surface of all the athletic history present in our schools and the legacy of Larry Hunter and the Minden Red Birds. Our current displays only scratch the surface of the rich African-American history that has largely gone undocumented, the new building would allow space to expand that topic. Each of our smaller communities in Webster Parish has its own unique history that needs to be told and will in the additional building. We are ready to move on those exciting improvements and expansions. All that remains is to raise the money to develop the new section of the museum. Money is always a tough issue, the museum is so grateful for the outpouring of support we have received from the community, and cognizant of the need to be a good steward of our contributions, but to fulfill our mission, we need a bit more. Annually, the Dorcheat Museum has its big fundraising event, a silent auction, in September. This year the gala is scheduled for Monday, September 9, 2019. Annually we raise substantial funding through the many auction items offered at that event. But in addition to that I ask each of you to consider if you want to make a gift, a chance to preserve our history and assure it is not forgotten by future generations. We would love to move forward with expansion of the museum to the additional space in order to tell more of the local story. To provide the boiler-plate language, the Dorcheat Museum is a 501(c)3 organization, meaning your contributions are tax deductible. However, we can recognize that giving to the museum is more a matter of the heart than the bank account. If you love Minden, Webster Parish and our history, please consider what you can do to allow our museum to grow and keep alive the stories of our past. Even if you can’t contribute, make plans to attend the fundraiser. You will get the chance to see the wonderful work that has been done, mingle with the wonderful groups of folks who are patrons of the association and perhaps catch a glimpse of the dreams we have for our museum. While we need your money, we treasure your involvement and support. Please consider helping preserve our local history.