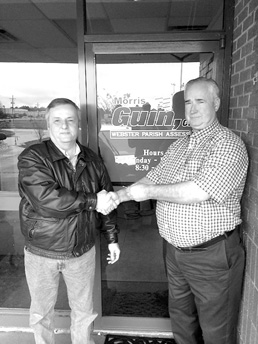 The north Webster Tax Assessor’s satellite office is open once again for the convenience of North Webster residents.

He says while most duties of the assessor’s office will be available to them there, in some cases, they will still have to come to the Minden office, located at 103 South Monroe.

“It’s just so far from Springhill down here,” Guin said in a telephone interview.

McMullan thanked Guin for his support in allowing him to take leave and return to the north Webster branch office.

McMullan is a certified deputy assessor, and must re-certify every four years.

The north Webster office is located at 110 Industrial Park Drive off Highway 371 in Sarepta. Guin said the office is located more closely to Cullen but has a Sarepta address. McMullan can be reached at 318-539-3301. Office hours are from 8:30 a.m. until 4:30 p.m.