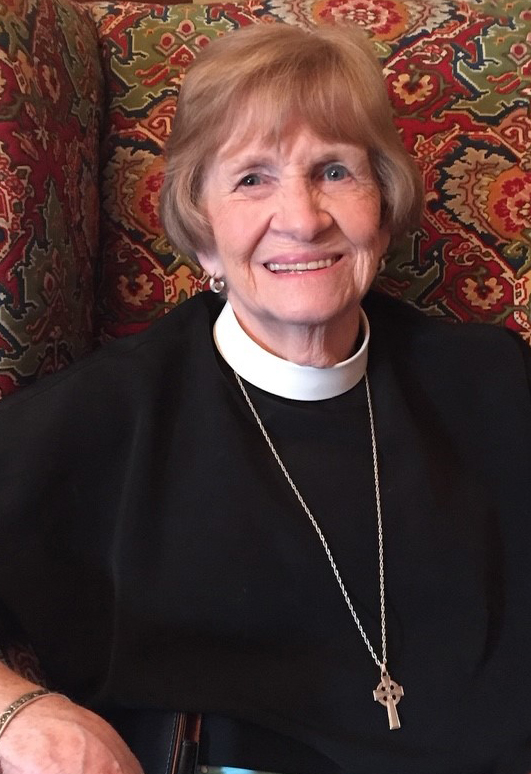 The Reverend Sarah McRae Fox was born on November 25, 1939, in Ferriday, Louisiana. She died in Shreveport, Louisiana, on August 9, 2020, following a brief illness. She was surrounded by the love of her children, Patrick, Sarah, Emily, and her daughter-in-law, Cherie. She is rejoicing at the reunion with her son, Jim, who met her with a glass of chardonnay in hand.

A funeral celebration will be held at The Church of the Holy Cross, 875 Cotton Street, Shreveport, Louisiana, at 1:00 p.m. on Friday, August 14, 2020, officiated by the Right Reverend Jake Owensby, Bishop of the Episcopal Diocese of Western Louisiana, the Reverend Garrett Boyte, the Reverend Kenneth Paul, and the Reverend Mary Richard. Seating is limited due to social distancing requirements and a video link will be available in her obituary at www.rose-neath.com. A private burial will follow at Forest Park Cemetery, St. Vincent Ave. Visitation will be on Thursday, August 13,2020, from 5:00 to 7:00 p.m., at Rose-Neath Funeral Home, 1815 Marshall Street in Shreveport.

Dubbed “Sally” early on by her parents, her red hair and iron will belied her small stature and marked her for the next eight decades. Excluding a brief stay at a German POW camp in New Mexico, where her father was stationed during World War II, Sally grew up in towns across Louisiana, from Ferriday, to Alexandria, to Shreveport, before she ultimately arrived in Baton Rouge. She was a proud graduate of the Baton Rouge High School Class of 1959. Family lore holds she was serving as a legislative page and rode an elevator with former Governor Earl K. Long when he was escorted to one asylum or another.

Like all good Louisianians, Sally attended Louisiana State University. She cheered Billy Cannon’s Halloween punt return in person and remained a Tiger for the rest of her life. At LSU, she met a somewhat nerdish but nonetheless handsome pre-med student, Jimmy Robinson. They married in 1959 and moved to New Orleans, where he attended medical school and she graduated from St. Mary’s Dominican College in 1962 with a degree in education. They ultimately settled in Shreveport courtesy of the United States Air Force, where they raised their four children. Sally and Jimmy were married for 23 years, and though they fought for a few thereafter, they remained friends for the rest of her life.

An accomplished pianist, Sally taught piano for several years in the 1970s. She remained deeply involved with her children’s school and spiritual lives, chairing more committees at Southfield School, St. Paul’s Episcopal Church, and St. Mark’s Day School, than this space allows, or these writers can remember. During that time, as her own spiritual faith deepened, she felt an increasing call to her church, her faith, and the priesthood. In 1979, amid still quiet but growing support for women priests, Sally enrolled at the Episcopal Seminary of the Southwest in Austin, Texas.

In 1982, her education was interrupted by the death of her oldest son, Jim, and the end of her marriage. But as red-haired Scottish women are wont to do, she stepped back, regrouped, and found her way. In 1984, she received her Master of Divinity. She became a deacon in 1985 and was ordained to the priesthood in the Episcopal Diocese of Michigan in 1989.

Over the following three decades, Sally ministered to tens of thousands from Houston, to Detroit, to Toledo, to Natchitoches, to Shreveport. She stood with Presidents and Popes (or at least some well-placed bishops). She cared for AIDS stricken patients, homeless families, inner-city children, and abused women. She fed the hungry, clothed the needy, and spoke for the meekest among us. She gave things she needed to people who needed them more and the world is a better place because she walked among us. And in the end, she found her happiest of places at St. John’s Episcopal Church in Minden, Louisiana where she served as Priest-in-Residence until her death. Her parishioners at St. John’s lovingly referred to her as Mother Sally.

Sally loved LSU football and the New Orleans Saints, though to the consternation of her son, she occasionally got the two confused. She loved classical music and going to movies. She loved lost cats and lost causes. She loved Stouffer’s lasagna, Gambino’s king cakes, and Blue Bell Moo-lenium Crunch. She loved sending gifts to her grandchildren and her great-grandchildren. Amazon, UPS, and FedEx will be so much the poorer for her passing. But above anything else in this world, she loved her children. She loved them at their best and at their worst. Because that’s what amazing Moms do.

Sally was preceded in death by her son, James “Jim” Richard Robinson, Jr., her parents, Joseph Herman Fox and Dorothy Haynie Fox, and her brother, Joseph Haynie Fox. She is survived by her children, Patrick Fox Robinson and his wife, Cherie; Sarah McRae Robinson Williams and her husband, John; Emily Koonce Robinson Claycomb and her husband, Doug; her grandchildren, Tim, Katie, Rebecca, Graham, Caroline, Frankie, and Keely; and her great-grandchildren, Parker and Mac.