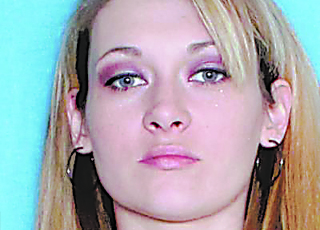 Samantha Shari Anderson, 29, of the 1100 block of Harvey’s Barbershop Road in Dubberly, was arrested on the charges of theft of goods (second offense) and possession of a legend drug.
Police Chief Steve Cropper says officers made contact with the loss prevention specialist who advised Anderson had been seen concealing multiple items in her purse.

“The items were retrieved, and then we were contacted,” he said. “A search of her purse was conducted to insure she did not have any weapons or other stolen property.”

During the search, officers located three and a half Gabepentin pills inside her purse.