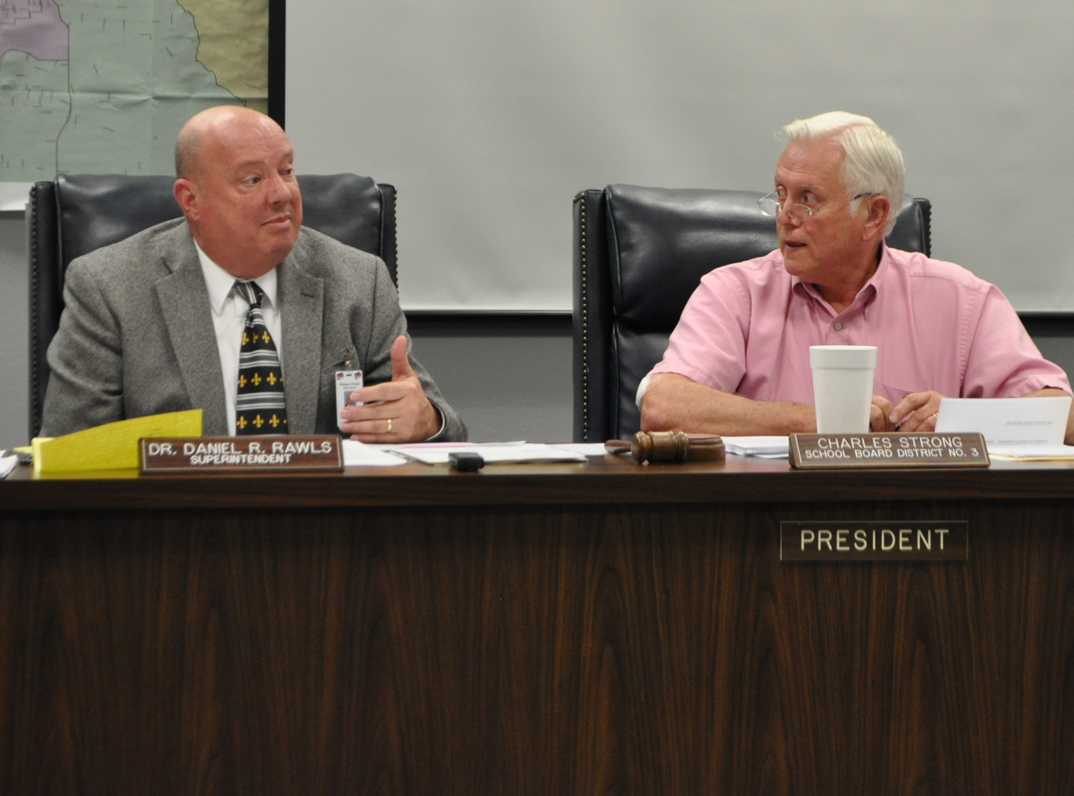 A decision on the salary schedule will be put on hold for the moment as officials with the Webster Parish School Board Central Office get questions answered and await the numbers for the upcoming school year.

In a finance committee meeting Monday, Superintendent of Schools Dr. Dan Rawls submitted a letter to board members listing his reasons why the decision should be put on hold. In his letter, he says several concerns need to be addressed before the board could take informed action on the issue, including the fact that the Louisiana Legislature has not completed its budget overhaul, which leaves the question of the Minimum Foundation Program unanswered.

Other concerns were how to deal with accounting procedures if they implement two salary schedules, one for the current employees, another for new hires. A third concern dealt with federal wage/hour laws, and another was sustainability of the new salary structure.

“You have to look down the line,” he said. “What’s happening is we’re paying so much in salaries here, that this little parish can’t sustain them with inflation. Paying so much is not a bad thing, because we get great teachers and they do a great job. That all said, we will have to address this sooner or later. It’s an unsustainable salary schedule. It will sooner or later reach a plateau where we can’t afford it.”

In April, employees districtwide voted not to change the salary schedule by an overwhelming majority.

Discussion came up about the options, one of which was to lower pay by $4,000 for new hires, leaving current employees at their current pay.

Jim Croad, with the Webster Association of Educators, says this was never about a pay raise but rather a salary structure that works for their retirement and unfreezing their pay.

“I think there has been some misunderstanding of the idea that changing the one salary schedule will only affect new hires,” he said. “Yes, they will get a lower paycheck where the rest of us continue to stay on a pay freeze for another four, five or six years, which will put us on a continued pay freeze on your estimation of 10 years. But worse than that is that it will take $4,000 off of our retirement.”

He says it’s the potential long-term damage to their careers.

“We never once asked for a raise,” he said. “That’s never been what this is about. It’s always been about trying to get to a point to where we get step increases towards retirement.”

Board President Charles Strong says they need a salary schedule that is equitable and simplistic.

“There are two or three factors that I think merit a further look before we take any action,” he said. “One of them would be to clarify the one or two salary schedules. Another thing I’d like to see us look at is whether we can create more than $15,000 or $16,000 in initial savings, while we remain equitable. Another thing is I’d like to look at the possibilities of having pay increases for current employees occur sooner after the implementation of any changes we make than we’ve been able to come up with so far.”

Rawls assured everyone in the room that this issue will not be put on the back burner; he says they should have some answers within about 90 days. Board members asked for monthly updates until they could begin discussions again.

In the regular meeting at 6 p.m., the school board took care of some housekeeping issues:

The next regular board meeting will be at 6 p.m., Monday, June 6, at Central Office, located at 1442 Sheppard Street.