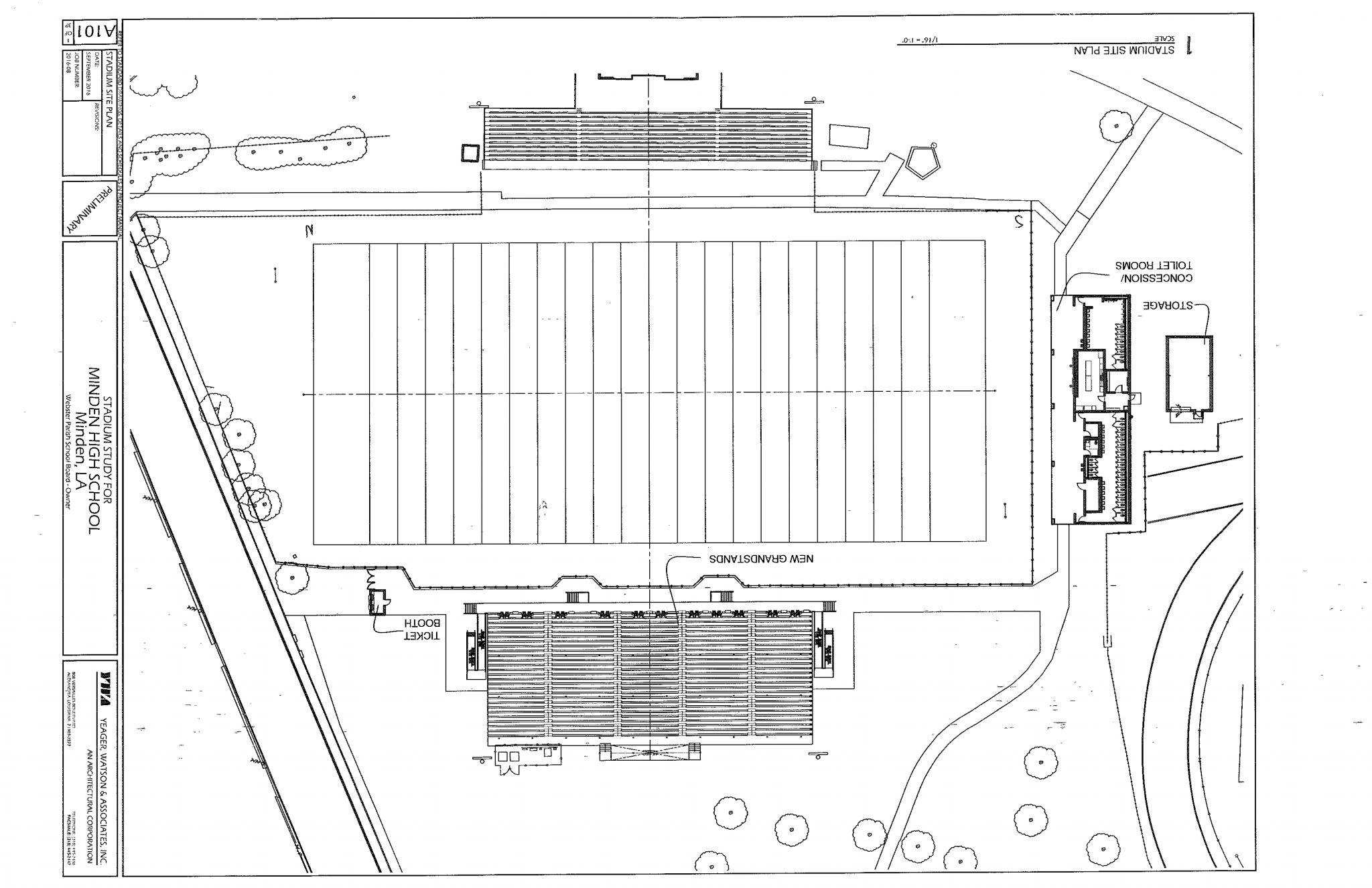 The Minden High School boys’ gym will be renovated instead of demolished, but construction is in a holding pattern, Webster Parish Schools Maintenance Supervisor Buster Flowers said. Construction of the grandstands at W.W. Williams Stadium will get underway following the football season.

Flowers said they can not do anything with the gym until the school board’s insurance company decides what it will pay and what the Federal Emergency Management Agency will reimburse.

“We have not gotten any approval or anything on the gym,” he said. “FEMA is evaluating what we’ve turned in, but they keep sending back stuff asking more questions. And the insurance company hasn’t done anything on the gym. So, we’re just kind of waiting in limbo waiting for everybody to make some decisions.”

He said they’ve turned in the cost of the damages to the roof of the gym and the old swimming pool.

“The problem is the old swimming pool was flooded from water from the ground going in,” he said. “That is what FEMA deals with. The gym itself and the floor, that damage was from wind-driven rain. That falls under the insurance company. We know right now that it will be more economical to redo the gym than to tear it down.”

If the board had decided to tear it down and rebuild, it would have cost roughly $8 million. At this time, Flowers said he does not have cost estimates for renovation, but it is expected be less than $3 million.

District 6 Board Member John Madden, buildings and maintenance committee member, said the board has to be fiscally responsible with taxpayer money throughout the process.

“We can’t just keep digging into that District 6 half-cent sales tax money,” he said. “Until we see where we are financially, what FEMA and the insurance company are going to do and a cost estimate for doing the repairs we deem necessary to the old gym and the timeframe unto which FEMA will make money available, I wouldn’t be in favor of moving forward with old gym repairs. First we have to have answers and a timeline.”

What will get done and what needs to be done remains to be seen, Flowers said.

Renovation will include a new roof over the entire building, new sewer lines underneath, an upgrade of the electrical system inside and installation of new air conditioning.

Flowers said the asbestos and mold abatement of the building is complete.

When renovation begins, the building will have to be renovated to meet current building codes. Flowers went on to say that even though the gym is not on the National Register of Historic Places, the building is considered historic – which brings up a whole other set of rules and regulations.

“The problem there is, the stairwells are not up to today’s code,” he said. “If we remodel it, we’re going to have to bring those stairwells up to today’s standards. Those stairs are one of the things that makes that building historical.”

Once the insurance company and FEMA have made their decisions, Flowers said the remaining costs will come from the District 6 half-cent sales tax fund.

Construction of the new grandstands at W.W. Williams Stadium, “The Pit,” will likely begin in late November to mid-December.

“They are about to let the bids on the stands,” Flowers said. “As soon as the last game is played, then they are going to start work on the stadium.”

The temporary stands will be taken down and work will begin on the entire stadium. New grandstands for the home side will include a new press box and seating for about 2,000.

On the south side of the field, the end closest to the trackfield, a new concession stand and restrooms will be constructed.

On the north end, a ticket booth will be built, and the sidewalk will be widened to allow foot traffic to flow easier.

Madden said the drainage channel underneath the stands will include a three-sided box culvert, along with a rock and debris lining to allow better flow for water runoff.

The estimated cost of the entire stadium project is about $3.5 million, which includes the drainage renovations, raising the field and the stands roughly two and a half feet above flood stage, the new concessions, restrooms and miscellaneous site work and architectural and engineering fees.

If all goes as planned, Flowers said the stadium should be completed by the time The Crimson Tide takes to the field in the 2017 season.