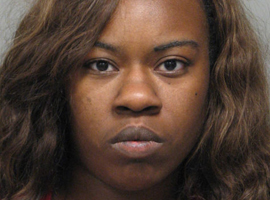 Facebook
Twitter
Linkedin
Email
Print
A Minden woman found herself under arrest after reportedly admitting she stole merchandise from a convenience store totaling more than $2,500.

Minden police chief Steve Cropper says she was an employee of Dixie Mart, and apparently she was stealing several packs of cigarettes a day.

“The store owner or manager apparently had Ms. Cosby on video where she was stealing numerous packs of cigarettes each day,” he said. “She would take receipts from customers who had purchased cigarettes, sign her name to the receipts and get the cigarettes as if she had purchased them.”

Cosby was a two-year employee of the store, and the $2,500 worth of receipts was over a three-week period, the chief said.
“So, the $2,500 was just in the past three weeks,” he reiterated, adding that detectives are still going farther than three weeks to see how far back the alleged theft goes.

Cropper says officers called her and asked her to come to the police station for questioning. Upon questioning, she reportedly admitted to stealing the merchandise and was subsequently placed under arrest.

She was booked and transported to Bayou Dorcheat Correctional Center.