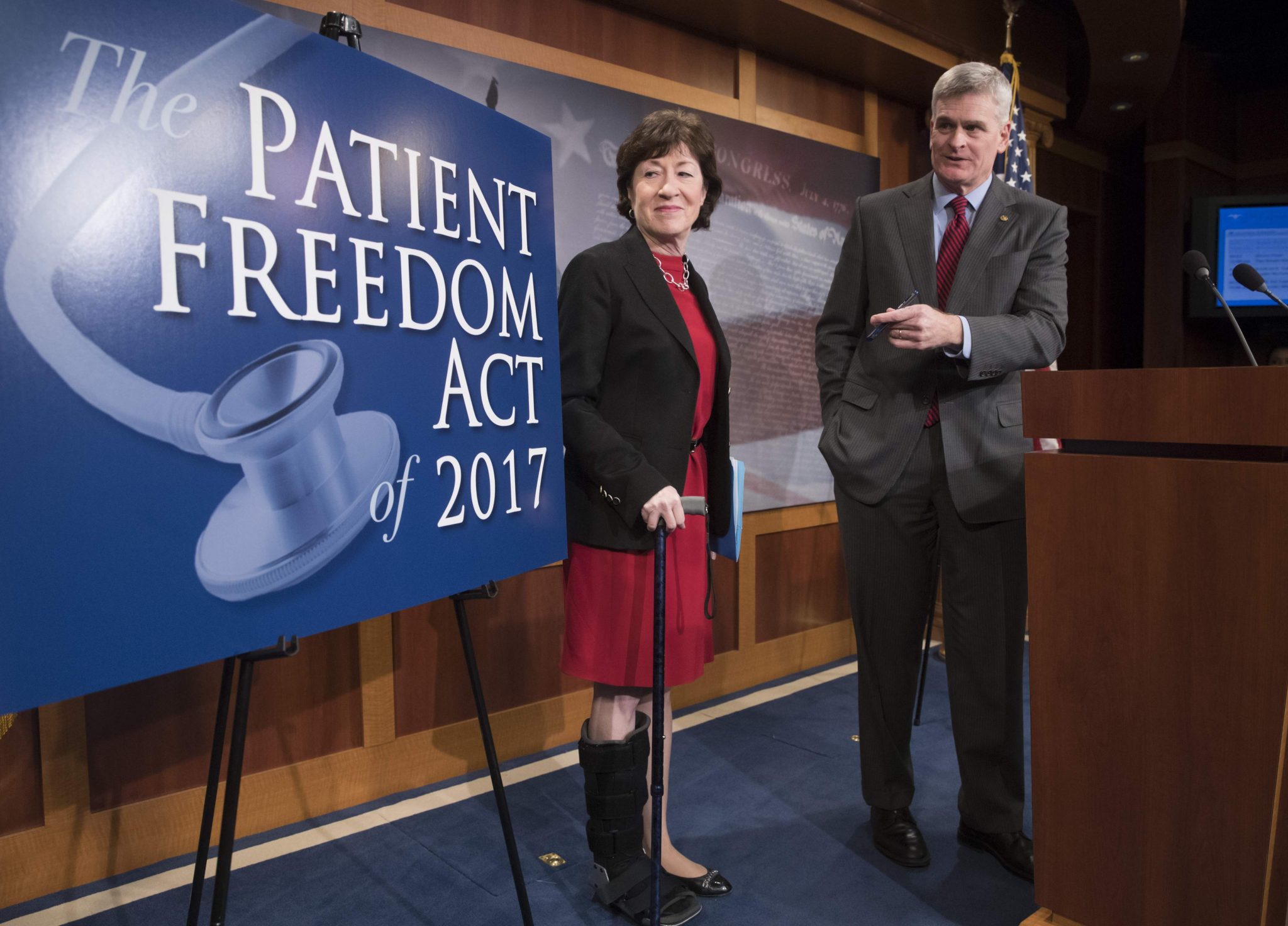 The plan by Sens. Bill Cassidy of Louisiana and Susan Collins of Maine would retreat from years of GOP cries to repeal Obama’s law and replace it with a still undefined Republican alternative. It comes as GOP lawmakers face pressure from President Donald Trump to quickly void and replace the health law and as Republicans continue hunting for a proposal that would unite them.

“It has been a Republican principle that power is best held by individuals and states, not the federal government,” Cassidy told reporters.

Trump has said he wants to keep some of the Obama overhaul’s consumer protections, like requiring insurers to cover people with pre-existing medical problems. Collins and Cassidy said their bill preserves many of those.

But Trump and congressional GOP leaders have not suggested letting states retain the entire statute. Such a proposal could dismay conservative voters who for years have viewed Republican calls to repeal the law as a top-tier promise and goal.

Cassidy said he’s discussed the proposal with Senate Majority Leader Mitch McConnell, R-Ky., who he said is “waiting to see how this plays out.”

Cassidy described the senators’ proposal as a way to help Republicans overcome a key obstacle: To enact a full replacement for Obama’s law, they will need 60 Senate votes in a chamber they control by just 52-48.

“If you can say to a blue-state senator who’s really invested in supporting Obamacare, you can keep Obamacare but why force it upon us, we think that helps us get to 60,” Cassidy said, using the law’s nickname.

Collins said the bill is still being written but would protect families and give insurers time to transition to new programs. She said if Republicans don’t advance legislation and start the health care debate, “Then we will fail the American people.”

“Ultimately, this proposal is an empty facade that would create chaos — not care — for millions of Americans,” he said.

If states decide against keeping Obama’s statute, the senators’ proposal would let them adopt a program that charges consumers a high deductible and helps cover some basic medical services like emergency care and prescriptions.

Insurers would not be allowed to refuse coverage to people with pre-existing medical problems, and money states would get under existing law would instead go to patients in the form of a tax-advantaged health savings account they’d use to pay for care.

States could also design their own programs but would receive no federal payments if they did.

Congressional leaders of both parties met with Trump on Monday at the White House, with participants saying they discussed health care and other issues, including infrastructure.

No. 2 Senate GOP leader John Cornyn of Texas said Trump told them he intended to enact an alternative that is “better and more affordable” than Obama’s overhaul. Cornyn said that prompted pushback from Congress’ two top Democrats, House Minority Leader Nancy Pelosi of California and Senate Minority Leader Chuck Schumer of New York, but he and others said the conversation was not specific.

House Speaker Paul Ryan, R-Wis., met with administration officials later in the Capitol, with Vice President Mike Pence saying, “Good progress tonight.” Later this week, congressional Republicans will stage a retreat in Philadelphia at which health care will be a chief topic.

The bipartisan staff memo, obtained by The Associated Press, said Price reported the shares were worth $50,000 to $100,000, based on the purchase price then. Those shares were worth up to $250,000 when he filed his forms to the Finance committee in December, the report said.

The shares are in Innate Immunotherapeutics Ltd., which Democrats have accused Price of purchasing based on insider information. Price has denied that.

The memo said Price had omitted from submitted forms any mention of a 2010 House Ethics Committee investigation into his campaign fundraising that was later dropped, as well as late tax payments and improper deductions involving rental properties.