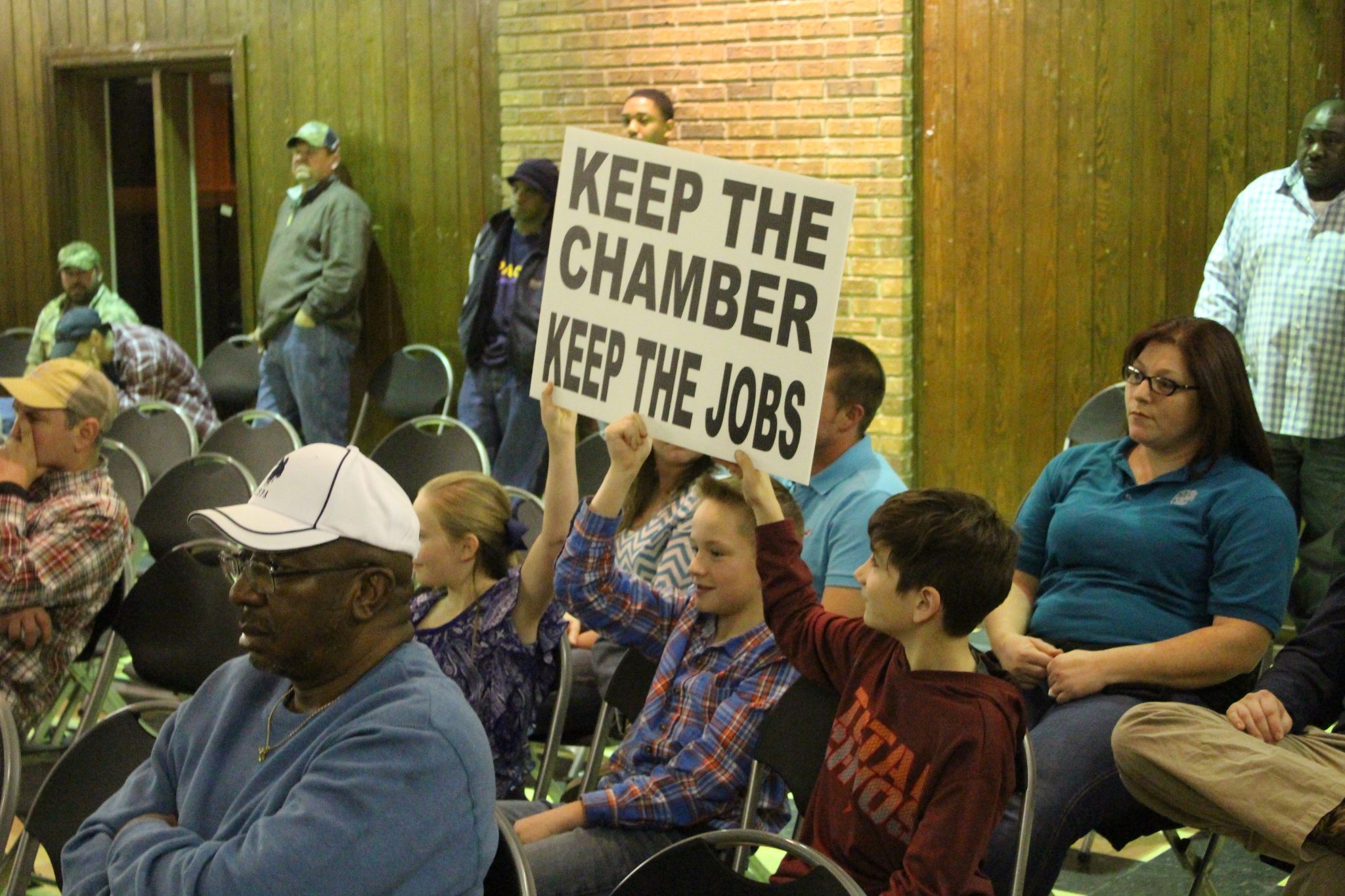 A meeting to update the public on the status of M6 disposal and air monitoring at Camp Minden turned into a passionate debate on both sides of the issue of whether the contained burn chamber should stay or go.

Dean Schellhase, project manager for the M6 disposal, said transportation of any hazardous material must be regulated and deemed safe before it can leave for its destination.

Webster Parish Police Juror Dustin Moseley, District 12, who represents the Doyline area asked if ESI would be hauling in hazardous material if they are permitted to stay. Schellhase’s answer was “yes.” Moseley then asked him to clarify the difference between what would be brought in versus new material transported in by the other companies.

“Transportation of any hazardous material, it has to be profiled, a manifest has to be done,” he said. “The same thing is going to happen with us, if say dinitrotoluene, crosses anywhere. You have to have either a generator’s knowledge or a sample showing that it’s suitable for transportation. It would be manifested and regulated the same.”

“It’s unnerving for a lot of people who live around here with everything being said about how safe it’s going to be when we ended up with 16 million pounds of unstable material sitting within a mile of a lot of houses,” Moseley said.

Schellhase said he made a good point: the material was unstable. However, it was deemed suitable to transport when it arrived at Camp Minden.

“That company did the wrong thing,” he said. “They didn’t dispose of it. They started outside. They didn’t maintain lot integrity, which is by law something you have to do. They violated a series of laws. But that material was shipped in there as a stable material suitable for transport.”

Moseley said many were concerned because the law violations weren’t caught until it was too late.

You had a company that was trying to make a dollar at lowest cost and do the wrong thing. They were operating as a ‘demil’ contractor. They were responsible to the ATF, they were responsible to the state police. Their arrangement with LMD was a little bit constricted because LMD didn’t have the right to inspect the way they needed to until they inherited it from my understanding.

“Under a treatment, storage and disposal facility, like we would be, we would be regulated not only by those agencies, but more importantly by the DEQ,” he continued. “If we receive the material, we have one calendar year to document that we’ve disposed of it. So we can’t stockpile something that would come in. It’s more regulated than what those people do.”

While many commended ESI on the job it’s done so far on the M6 disposal, they say that no matter what, they don’t want the chamber to stay.

James Eldridge said he worked in the railroad industry for many years and has seen what the extreme Louisiana weather can do to railways.

“I know anything manmade is subject to flaw,” he said. “Helping with this M6, I agree with that. But when it’s over with, let it be over with.”

ESI said they want to amend their contract with the Louisiana Military Department, Schellhase said. Jason Poe, ESI vice president, said they have not sought out other contracts and no one has approached them to enter into a contract.

During the Citizens Advisory Group, it was decided to set a radius to garner a vote from citizens on whether the chamber should stay or go. David Madden, who owns a business near the contained burn chamber site, said it would be prudent to set the radius, because it needs to be an open and honest debate.

Sherrie Moseley said the citizens of Doyline are tired. They have lived with this in their back yards long enough.

“Our concerns have been marginalized, and we in Doyline know for a fact that no matter what we’re told, things happen, even if it’s an accident by a great company, or human error,” she said. “Things do happen. I do feel bad for the other places, but that sure as heck doesn’t mean we should be made to feel guilty for not wanting more and more and more of this mess brought to our area. Our children and our grandchildren deserve better.”

May 15 is the anticipated date to complete the project, and if the contract between LMD and ESI remains as is to date, it will take additional time to complete sampling, testing and dismantling of the contained burn chamber, Schellhase said.

To date, roughly 12 million pounds or 75 percent of the M6 has been destroyed.