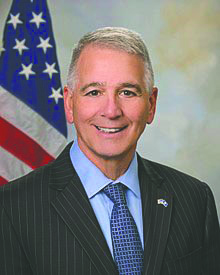 (AP) – As he travels Louisiana seeking support for his gubernatorial bid, Republican U.S. Rep. Ralph Abraham is spending less time in Washington and casting fewer votes than nearly all of his colleagues.

Abraham had strong attendance in his first two terms in the U.S. House, missing only 10 roll call votes out of 2,450 from January 2015 through September 2018, according to GovTrack, an independent clearinghouse for congressional data.

The same GovTrack data, however, shows that Abraham has missed nearly 200 votes in Congress since he started running for governor in December, decisions on bills dealing with immigration, flood insurance and spending plans, among others.

Abraham has skipped 196 of 509 roll call votes – nearly 39% – in the House from the November/December voting period through Wednesday, according to the data, giving him one of the worst attendance records among current House members.

And the absence rate is growing as the Oct. 12 election for governor nears.

Abraham, a doctor from rural Richland Parish, is one of two GOP contenders trying to keep Democratic incumbent John Bel Edwards from election to a second term. Also in the race is Baton Rouge businessman Eddie Rispone.

Rather than casting votes this week, Abraham spoke to farmers Wednesday in Crowley, met with supporters Thursday in New Orleans and planned to attend a Thursday evening fundraiser in Monroe.

‘’Being a congressman is more than sitting at a desk and voting yes or no. We are daily solving constituents’ problems. All of our offices are wide open,’’ Abraham said in an interview. ‘’My constituents know how hard we work for them, but they also know that Louisiana is dying under this governor.’’

Supporters of Edwards are slamming the Republican congressman’s skipped votes. They say he’s not earning the $174,000 salary he receives to represent the 5th Congressional District, which stretches across 24 parishes in northeast and central Louisiana, and is abandoning his constituents for personal ambition.

‘’If Rep. Abraham won’t even show up for major votes in Congress, Louisianans can’t trust him to show up for them as governor,’’ Edwards campaign spokesman Eric Holl said in a statement.

Abraham was absent for this week’s debate between the U.S. House and Senate over a multibillion- dollar border aid package and care requirements for detained migrant families and children. He wasn’t on hand to vote for the renewal of the National Flood Insurance Program, which Louisiana’s congressional delegation has called critical to the state’s families, particularly in hurricane season.

Abraham said the House’s Democratic leaders scheduled the flood insurance vote ‘’at the last moment’’ after he had already scheduled patient visits at his medical office, and he said he knew the legislation would pass by a wide margin of support.

‘’My vote, in that particular instance, we knew would have no effect’’ on the outcome, Abraham said.

Edwards supporters compare Abraham to unpopular Republican former Gov. Bobby Jindal, who was criticized by Republicans and Democrats alike for his frequent travel outside of Louisiana during his second term when he unsuccessfully ran for president.

Abraham’s campaign pointed to former congressmen, including Jindal, Buddy Roemer and Billy Tauzin, who missed larger percentages of congressional votes when they ran for governor.

‘’If you’re going to make a run in this state, people they want to see you,’’ Abraham said. ‘’You’ve got to be in every corner of the state.’’