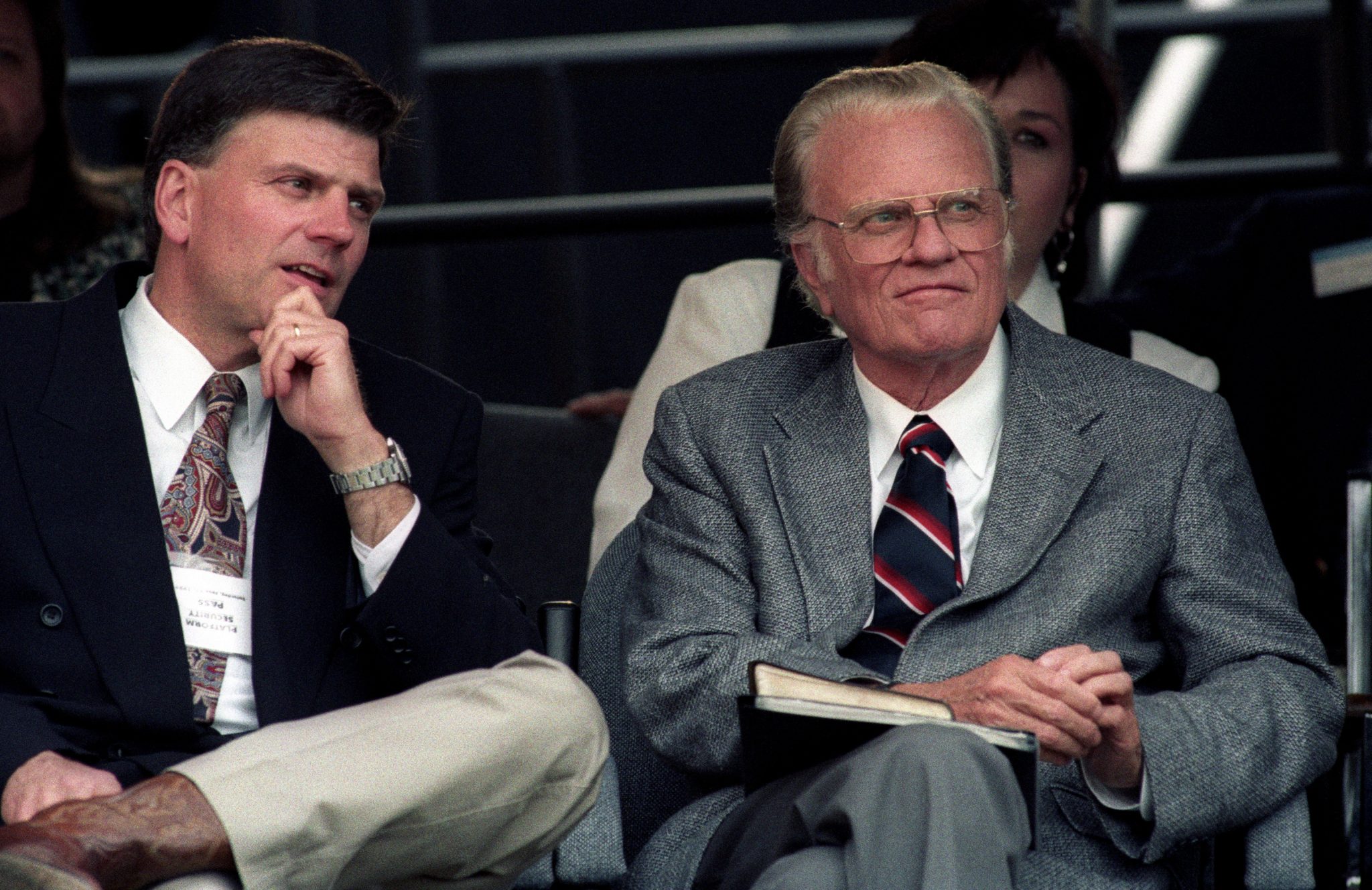 MONTREAT, N.C. (AP) — The Rev. Billy Graham, who transformed American religious life through his preaching and activism, becoming a counselor to presidents and the most widely heard Christian evangelist in history, died Wednesday. He was 99.

Graham, who long suffered from cancer, pneumonia and other ailments, died at his home in North Carolina, according spokesman Mark DeMoss.

More than anyone else, Graham built evangelicalism into a force that rivaled liberal Protestantism and Roman Catholicism in the United States. His leadership summits and crusades in more than 185 countries and territories forged powerful global links among conservative Christians, and threw a lifeline to believers in the communist-controlled Eastern bloc. Dubbed “America’s pastor,” he was a confidant to U.S. presidents from Gen. Dwight Eisenhower to George W. Bush.

“When he prays with you in the Oval Office or upstairs in the White House, you feel he’s praying for you, not the president,” Clinton said at the ceremony.

Beyond Graham’s public appearances, he reached untold millions through his pioneering use of prime-time telecasts, network radio, daily newspaper columns, evangelistic feature films and globe-girdling satellite TV hookups. Graham’s message was not complex or unique, yet he preached with a conviction that won over audiences worldwide.

“The Bible says,” was his catch phrase. His unquestioning belief in Scripture turned the Gospel into a “rapier” in his hands, he said.

A tall, striking man with thick hair, stark blue eyes and a firm jaw, Graham was a commanding presence at his crusades. He would make the altar call in his powerful baritone, asking the multitudes to stand, come down the aisles and publicly make “decisions for Christ,” as a choir crooned the hymn “Just As I Am.”

By his final crusade in 2005 in New York City, he had preached in person to more than 210 million people worldwide. No evangelist is expected to have his level of influence again.

“William Franklin Graham Jr. can safely be regarded as the best who ever lived at what he did,” said William Martin, author of the Graham biography “A Prophet With Honor.”

Born Nov. 7, 1918, on his family’s dairy farm near Charlotte, N.C., Graham came from a fundamentalist background that expected true Bible-believers to stay clear of Christians with even the most minor differences over Scripture. But as his crusades drew support from a widening array of Christian churches, he came to reject that view.

He joined in a then-emerging movement called New Evangelicalism, that abandoned the narrowness of fundamentalism to engage broader society. Fundamentalists at the time excoriated the preacher for his new direction, and broke with him when he agreed to work with more liberal Christians in the 1950s.

Graham stood fast. He would not reject people who were sincere and shared at least some of his beliefs, Martin said. He wanted the widest hearing possible for his salvation message.

“The ecumenical movement has broadened my viewpoint and I recognize now that God has his people in all churches,” he said in the early 1950s.

In 1957, he said, “I intend to go anywhere, sponsored by anybody, to preach the Gospel of Christ.”

His approach helped evangelicals gain the influence they have today. Graham’s path to becoming an evangelist began taking shape at age 16, when the Presbyterian-reared farm boy committed himself to Christ at a local tent revival.

“I did not feel any special emotion,” he wrote in his 1997 autobiography, “Just As I Am.” ‘’I simply felt at peace,” and thereafter, “the world looked different.”

After high school, he enrolled at the fundamentalist Bob Jones College, but found the school stifling, and transferred to Florida Bible Institute in Tampa. There, he practiced sermonizing in a swamp, preaching to birds and alligators before tryouts with small churches. He still wasn’t convinced he should be a preacher until a soul-searching, late-night ramble on a golf course.

Graham, who became a Southern Baptist, went on to study at Wheaton College, a prominent Christian liberal arts school in Illinois, where he met fellow student Ruth Bell, who had been raised in China where her father had been a Presbyterian medical missionary.

The two married in 1943, and he planned to become an Army chaplain. But he fell seriously ill, and by the time he recovered and could start the chaplain training program, World War II was nearly over.

Instead, he took a job organizing meetings in the U.S. and Europe with Youth for Christ, a group he helped found. He stood out then for his loud ties and suits, and a rapid delivery and swinging arms that won him the nickname “the Preaching Windmill.”

A 1949 Los Angeles revival turned Graham into evangelism’s rising star. Held in a tent dubbed the “Canvas Cathedral,” Graham had been drawing adequate, but not spectacular crowds until one night when reporters and photographers descended. When Graham asked them why, a reporter said that legendary publisher William Randolph Hearst had ordered his papers to hype Graham. Graham said he never found out why.

The publicity gave him a national profile. Over the next decade, his massive crusades in England and New York catapulted him to international celebrity. His 12-week London campaign in 1954 defied expectations, drawing more than 2 million people and the respect of the British, many of whom had derided him before his arrival as little more than a slick salesman. Three years later, he held a crusade in New York’s Madison Square Garden that was so popular it was extended from six to 16 weeks, capped off with a rally in Times Square that packed Broadway with more than 100,000 people.

The strain of so much preaching caused the already trim Graham to lose 30 pounds by the time the event ended. It remains his longest revival meeting ever.

As his public influence grew, the preacher’s stands on the social issues of his day were watched closely by supporters and critics alike. One of the most pressing was the civil rights movement. Graham was no social activist and never joined marches, which led prominent Christians such as theologian Reinhold Niebuhr to publicly condemn Graham as too moderate. Still, Graham ended racially segregated seating at his Southern crusades in 1953, a year before the Supreme Court’s school integration ruling, and long refused to visit South Africa while its white regime insisted on racially segregated meetings.

In a 2005 interview with The Associated Press, before his final crusade which was held in New York, Graham said he regretted that he didn’t battle for civil rights more forcefully.

“I think I made a mistake when I didn’t go to Selma” with many clergy who joined the historic Alabama march led by the Rev. Martin Luther King Jr. “I would like to have done more.” Graham more robustly took on the cause of anti-Communism, making preaching against the atheist regime part of his sermons for years.

As America’s most famous religious leader, he golfed with statesmen and entertainers and dined with royalty. Graham’s relationships with U.S. presidents also boosted his ministry and became a source of pride for conservative Christians who were so often caricatured as backward. But those ties proved problematic when his close friend Richard Nixon resigned in the Watergate scandal, leaving Graham devastated and baffled. He resolved to take a lower profile in the political world, going as far as discouraging the Rev. Jerry Falwell, a founder of the Moral Majority, from mixing religion and politics.

“Evangelicals can’t be closely identified with any particular party or person. We have to stand in the middle, to preach to all the people, right and left,” Graham said in 1981, according to Time magazine. “I haven’t been faithful to my own advice in the past. I will in the future.”

Yet, in the 2012 election, with Graham mostly confined to his North Carolina home, he all but endorsed Republican presidential nominee Mitt Romney. And the evangelist’s ministry took out full-page ads in newspapers support a ballot referendum that would ban same-sex marriage.

His son, the Rev. Franklin Graham, who runs the ministry, said his father viewed the gay marriage question as a moral, not a political, issue. Graham’s integrity was credited with salvaging the reputation of broadcast evangelism in the dark days of the late 1980s, after scandals befell TV preachers Jimmy Swaggart and Jim Bakker.

He resolved early on never to be alone with a woman other than his wife. Instead of taking a share of the “love offerings” at his crusades, as was the custom, he earned a modest salary from the Billy Graham Evangelistic Association.

His ministry was governed by an independent board that included successful Christian businessmen and other professionals — a stark departure from the widespread evangelical practice of packing boards with relatives and yes-men.

“Why, I could make a quarter of a million dollars a year in this field or in Hollywood if I wanted to,” Graham said.

“The offers I’ve had from Hollywood studios are amazing. But I just laughed. I told them I was staying with God.”

While he succeeded in preserving his reputation, he could not completely shield his family from the impact of his work. He was on the road for months at a time, leaving Ruth at their mountainside home in Montreat, North Carolina, to raise their five children: Franklin, Virginia (“Gigi”), Anne, Ruth and Nelson (“Ned”).

Anne Graham Lotz has said that her mother was effectively “a single parent.” Ruth sometimes grew so lonely when Billy was traveling that she slept with his tweed jacket for comfort. But she said, “I’d rather have a little of Bill than a lot of any other man.” She died in June 2007 at age 87.

“I will miss her terribly,” Billy Graham said, “and look forward even more to the day I can join her in heaven.”
In his later years, Graham visited communist Eastern Europe and increasingly appealed for world peace. He opened a 1983 convention of evangelists from 140 nations by urging the elimination of nuclear and biological weapons.

He told audiences in Czechoslovakia that “we must do all we can to preserve life and avoid war,” although he opposed unilateral disarmament. In 1982, he went to Moscow to preach and attend a conference on world peace. During that visit, he said he saw no signs of Soviet religious persecution, a misguided attempt at diplomacy that brought scathing criticism from author Alexander Solzhenitsyn, among others.

“It’s worth taking a risk for peace,” Graham contended, although he was clearly stung by the controversy.

Graham’s relationship with Nixon became an issue once again when tapes newly released in 2002 caught the preacher telling the president that Jews “don’t know how I really feel about what they’re doing to this country.”

Graham apologized, saying he didn’t recall ever having such feelings and asking the Jewish community to consider his actions above his words on that tape. Health problems gradually slowed Graham, but he did not cease preaching.

In 1995, his son, Franklin, was named the ministry’s leader. Along with the many honors he received from the evangelical community and the Presidential Medal of Freedom, Graham received the $1 million Templeton Prize for Progress in Religion in 1982 and the Congressional Gold Medal in 1996.

Graham will be buried by his wife, Ruth, at the Billy Graham Museum and Library.

“I have been asked, ‘What is the secret?’” Graham had said of his preaching. “Is it showmanship, organization or what? The secret of my work is God. I would be nothing without him.”