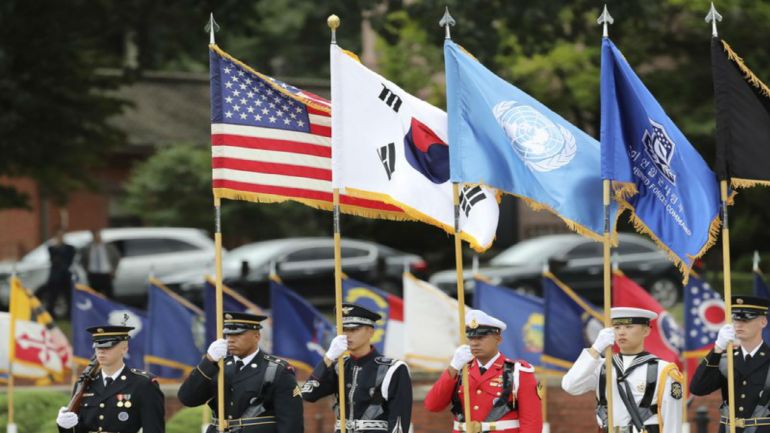 SEOUL, South Korea — Military officials said Friday they plan to move ahead with large-scale U.S.-South Korea exercises later this month that North Korea, now finalizing plans to launch a salvo of missiles toward Guam, claims are a rehearsal for war.

The exercises are an annual event, but come as Pyongyang says it is readying a plan to fire off four Hwasong-12 missiles toward the tiny island, which is U.S. territory and major military hub. The plan would be sent to leader Kim Jong Un for approval just before or as the U.S.-South Korea drills begin.

Called Ulchi-Freedom Guardian, the exercises are expected to run from Aug. 21-31 and involve tens of thousands of American and South Korean troops on the ground and in the sea and air. Washington and Seoul say the exercises are defensive in nature and crucial to maintaining a deterrent against North Korean aggression.

The exercises were scheduled well before tensions began to rise over President Donald Trump’s increasingly fiery rhetoric and North Korea’s announcement of the missile plan, which if carried out would be its most provocative launch yet. Along with a bigger set of maneuvers held every spring, the exercises are routinely met by strong condemnation and threats of countermeasures from North Korea.

While tensions typically spike around the dates of the exercises — North Korea conducted its fifth nuclear test just days after last year’s maneuvers — the situation generally calms afterward as the North needs to focus on its farms and the approach of the fall harvest.

The heightened military activity on the peninsula this time is a concern because it could increase the possibility of a mishap or an overreaction of some sort by either side that could spin into a more serious escalation. North Korea has been increasingly sensitive to the exercises lately because they reportedly include training for “decapitation strikes” to kill Kim Jong Un and his top lieutenants.

Pyongyang is also switching its propaganda machine into high gear by bringing in a large number of foreign journalists to ensure it gets global attention for an event next week in honor of its ruling Kim family on Mount Paektu, a dormant volcano that straddles the Chinese border and is something of a spiritual home for the regime.

Defense officials in Seoul confirmed Friday that the exercises are expected to begin without any delays, but refused to provide further details. According to the U.S. Department of Defense, Ulchi-Freedom Guardian involves about 40,000 troops, along with civilian South Korean government personnel who train their civil defense responses.