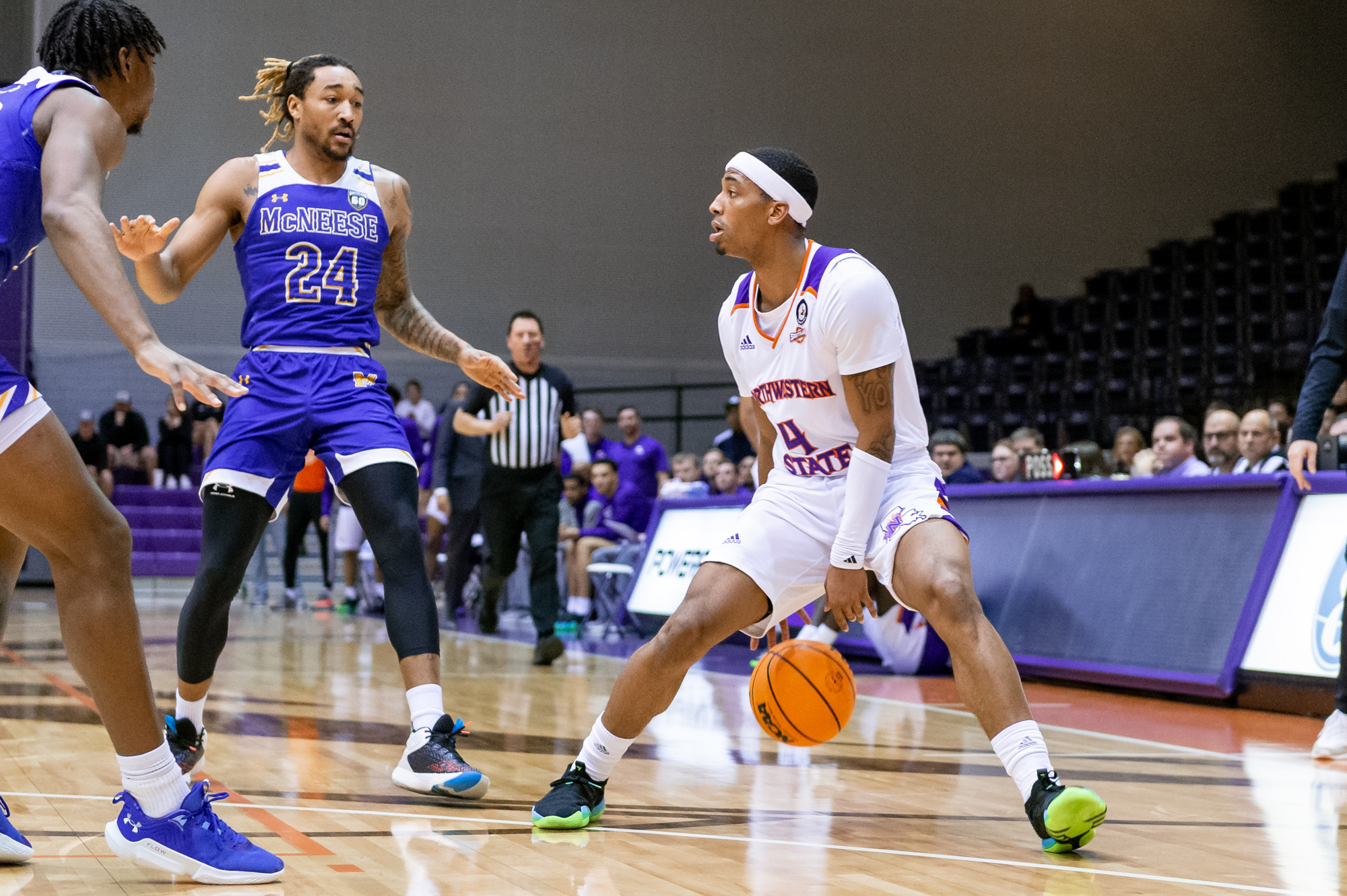 Led by a career-best eight 3-pointers from Ja’Monta Black, the Demons stormed back from a one-point halftime deficit to drop the Cowboys, 89-75, and earn a split of the season series.

“You never know when shots are going to fall,” first-year head coach Corey Gipson said. “When we played them at McNeese, they were sharpshooters from beyond the arc, and it paid off for them. Going into this game, we had a defensive strategy to take away the 3-point line, and they got in our paint a little. Credit our guys for paying attention to detail and being assignment correct on both sides of the ball.

“Our guys have had confidence all year long shooting from behind the arc. Tonight, we were the recipient of them going in the basket.”

Black’s eight 3-pointers eclipsed his career high accomplished three times at Missouri State and earlier this year in the Demons’ 64-63 win at then-No. 15 TCU on Nov. 14. The Southland leader in made 3-pointers, Black was a perfect 5-for-5 from long range in the second half, helping the Demons knock down seven of their 11 second-half 3-point tries.

The Demons needed that sharpshooting performance to offset a season-high 24 turnovers – 16 of which came in the first 20 minutes of the game. Despite nearing a season high in miscues after just 20 minutes, Northwestern State trailed by just one at the break.

Black’s second-half heater began with a corner 3 to beat the shot clock and tie the game at 46 with 13:03 to play. DeMarcus Sharp followed with a 3 on the Demons’ next possession to give NSU a lead it never relinquished thanks in large part to an expanded rotation that continues to pay dividends.

Cedric Garrett, one of three returning lettermen from the 2021-22 Demon roster, was a plus-15 in a season-high 14 minutes. Garrett finished with a season-best six points, three of which came on a left-wing 3 with 4:44 to play after McNeese had cut the Demon lead to nine.

“Everybody knows their strengths, and one of mine is shooting the ball,” Garrett said. “I was confident I was going to knock it down. Everyone has that dog mentality. We just want to do what’s best for each other and have each other’s back. We went out and executed today and got the outcome we wanted.”

In addition to being outscored by 18 points from beyond the arc in the first matchup between the teams, the Demons were outrebounded by two a week ago.

The return of 7-foot-3 center Jordan Wilmore changed those fortunes as Northwestern State won the battle of the boards 43-22 – its first 20-plus rebound margin of the season and its first since against a Division I team since producing a 28-rebound advantage in a Jan. 15, 2019, win at Nicholls.

Playing in a mask to protect a broken nose, Wilmore added an NSU career-high five points to his rebound total.

“I was super eager to get out there and help my teammates,” Wilmore said. “I wanted to get back to playing something I loved. We were assignment correct. We knew what we had to do. We had to stick to it and lock in.”

Black’s 24 points were a game high and the Demons’ depth helped them pull away from a McNeese team that saw all five starters tally at least 11 points, led by Johnathan Massie’s 18.

The Demons return to action Saturday when they travel to Nicholls. Tipoff is set for 3:30 p.m. inside Stopher Gym.