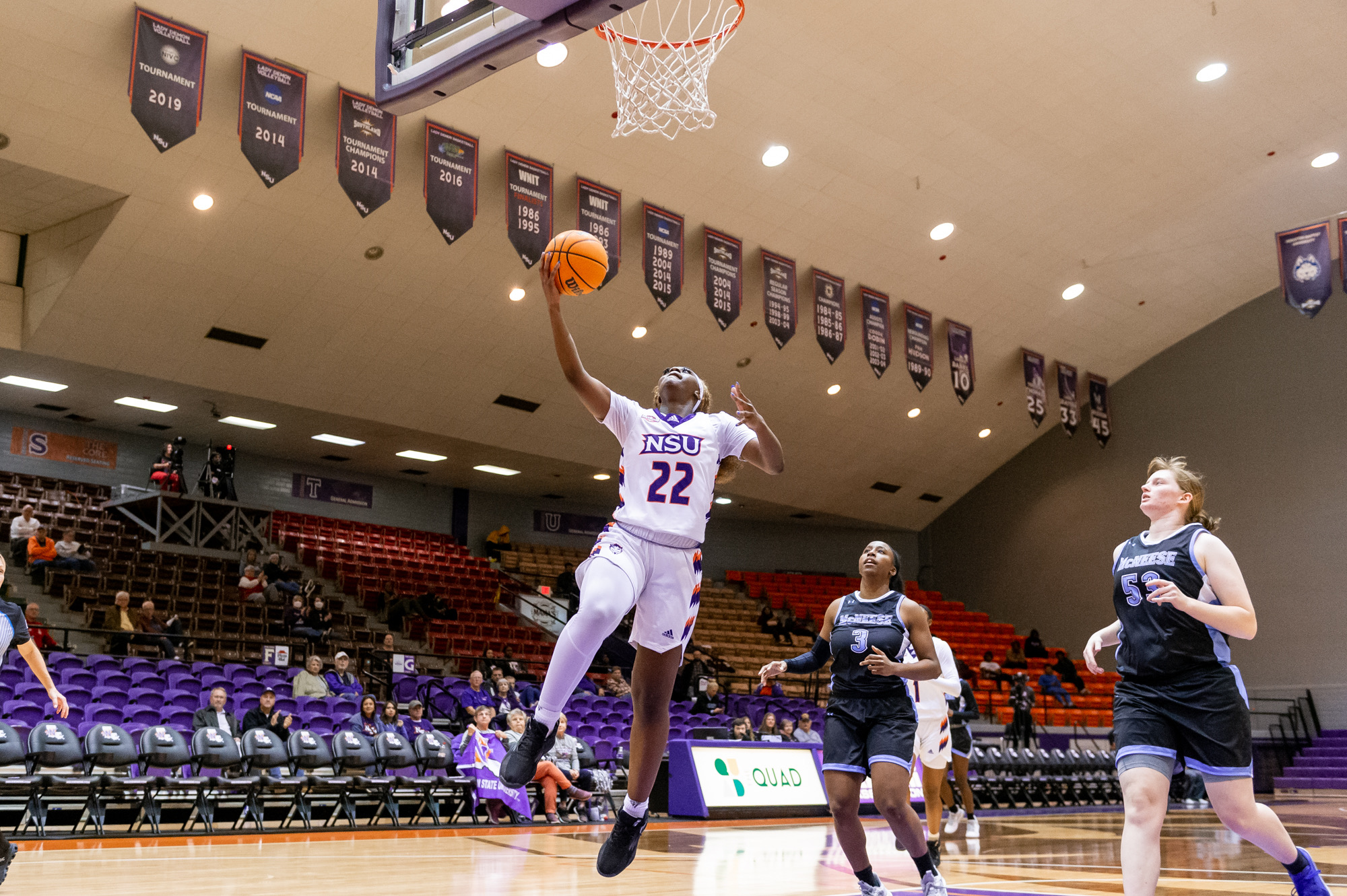 NATCHITOCHES – Head coach Anna Nimz, and all the Northwestern State faithful, let out a collective sigh as the final shot of the night skipped off the rim as the buzzer sounded.

The final moment in a string of razor-thin plays over the final two minutes of the game that finally secured the Lady Demons’ thrilling 62-61 win over rival McNeese.

“As much as I felt a sigh of relief when the clock hit zero there was an equal amount of pride there,” Nimz said. “Any time you win a close game its huge, a close conference game is even bigger. But down the stretch some of the maturity and execution we had tonight, I can see our team getting better. So often we let the girls know that, If we correct us, we can be a pretty dangerous team, I think we saw some of that tonight.”

The drama of the fourth quarter began almost as soon as the Lady Demons (6-8, 2-2) tied the game at 49 on a Jasmin Dixon jumper in the paint two and a half minutes into the quarter.

The NSU defense got stops on the ensuing two McNeese (4-11, 1-3) possessions, but two turnovers by the offense kept the game even. The Cowgirls capitalized immediately on the second to regain the lead on a fastbreak layup the other way.

The lead changed hands five more times from that point forward, beginning with the very next shot, a Shelby Rayner 3-pointer, one of two in the fourth quarter for her part of her eight second-half points.

Alecia Whyte gave NSU its largest lead of the quarter with on a baseline cutting layup with four minutes remaining but served as the only points for the Demons for nearly three minutes in the critical part of the game.

The Cowgirls went on a 7-0 run during that stretch to retake the lead and hold a 60-56 advantage with two minutes remaining.

One of the key players for the Lady Demons over the past four games, Jiselle Woodson, ended the scoreless stretch with a clutch 3-pointer pulling NSU back within a point with just over a minute left in the game.

The bucket served as her 23rd point, matching a career high, part of her seven fourth-quarter points and 13 in the second half. It is her third straight double-digit scoring night in a row and she is averaging 16.3 points per game during that stretch.

“The difference tonight and the past two games has been the next level of buy-in we’ve had,” she said. “We prepared, did our scout, came ready to fight and it came down to the wire. We had to adjust to some things on both sides of the ball and had some people step up. Shelby had a big second half, but everybody contributed so well tonight.”

On the ensuing possession Jasmin Dixon forced an errant shot from the McNeese post player and grabbed her game-best 10th rebound.

Joelle Johnson gave the Lady Demons the lead for the final time on the next shot with an open jumper in the lane with 34 seconds remaining and then turned her and her teammates’ attention to the defense.

After multiple official reviews and close calls, that all fell McNeese’s way, the Lady Demons locked in defensively for the final seconds enough time to secure the win. A critical missed free throw from McNeese’s Desirae Hansen with four seconds left proved to be the ultimate deciding factor.

Staunch defense on each McNeese inbound, fast hands causing a loose ball, and hands in the face of every attempt down the stretch gave McNeese no easy look at the basket.

“Coach told us what seemed like a thousand times that we need just one stop, just one stop,” Johnson said. “We kept having the ball go to them so we had to keep playing defense and it was one stop again. We had to focus in on our gameplan and execute in that moment and all night and we did that.”

Woodson finished the night with a career high 24, providing a late free throw to give her the new best, and added five assists. Johnson ended with 13 points, six rebounds, five steals and four assists, one the best all-around games of her career, and Rayner finished with 11.

“The top of our board tonight said ‘Tougher Together”, Nimz said. “I thought tonight they put together a team win and were absolutely that, tougher together, just very happy for them.”