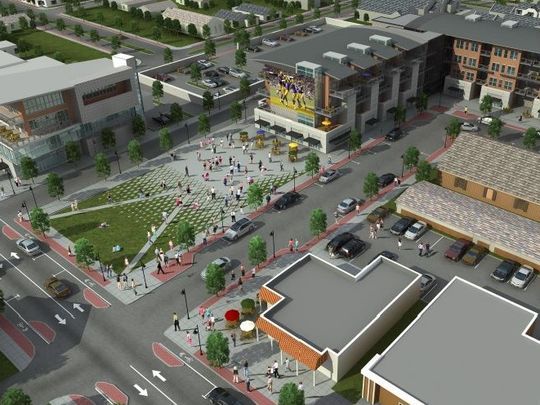 Befitting its big small town mentality that relies more on who you know that what you know, Bossier City can’t seem to get it quite right with its downtown plans.

Last month, its City Council finally thought it had hit upon the formula to keep downtown revitalization moving forward. Over the past two years the city has sunk millions of dollars into an entire remaking of the area, turning an unremarkable stretch of aging storefronts and isolated businesses along a generic road into a pedestrian-friendly area inviting people to come and stick around.

A key element turned an essentially vacant, disheveled block into the East Bank District Festival Plaza (although its outward appearance makes passing motorists looking for parking spaces, one thing the plan didn’t address especially well, wonder when the city will finish the parking garage). Another same from making legal most hours of the day carrying open containers of booze in the area, allowing patrons to cross-pollinate the long-standing L’italiano Restaurant, the relatively new and rapidly-evolving Flying Heart Brewing and Pub, and whatever other food and drink establishments would cluster nearby or other existing ones would serve alcohol. Finally, such sales and portage could occur during events at the plaza.

Originally, the city wanted to extend this district to the casinos north of Interstate 20, an idea a council majority rejected over public safety concerns. While intended to suck in casino patrons tired of losing money but not wishing to hand over their drinks, the wide geographical spread would have made enforcement difficult and, frankly, with the area next to one of the city’s most rough-and-tumble neighborhoods, would have compounded potential problems.

To satisfy such concerns, the next iteration dramatically reduced the area, making it run just along Barksdale Boulevard for three blocks and gulping in the plaza. At the very least, East Bank Theater patrons could nip over to Flying Heart and hang around outside during intermission and after a performance, or people could shuttle back and forth from the brewpub to the restaurant. The Council blessed such an ordinance.

Except, city officials embarrassingly informed it, state alcohol regulations permit open carry only from bars, and even Flying Heart, which does not serve its own food but has Wooden Spoon Pizza come in to provide that, qualifies as a restaurant under those standards. So, the city decided it would hire a manager to plan plenty of events at the plaza and therefore provide lots of opportunities to obtain special event permits that would allow open carry, spicing up events and aiding the establishments.

Except the Council wasn’t thrilled to hear the city wanted to hire without open bidding a Shreveport company to coordinate and pay costs for all events involving the plaza, at $5,500 a month. A bare 4-3 Council majority shelved that idea for the time being, asking the city to solicit multiple offers.

This process has dragged on needlessly. Better research and communication by the Mayor Lo Walker Administration could have avoided this.

Jeff Sadow is an associate professor of political science at Louisiana State University Shreveport, where he teaches Louisiana Government. He is author of a blog about Louisiana politics at http://www.between-lines.com, where links to information in this column may be found. When the Louisiana Legislature is in session, he writes about legislation in it at http://www.laleglog.com. Follow him on Twitter @jeffsadow. Write to him at voteearlyvoteoften@yahoo.com. His views do not necessarily express those of his employer or this newspaper.