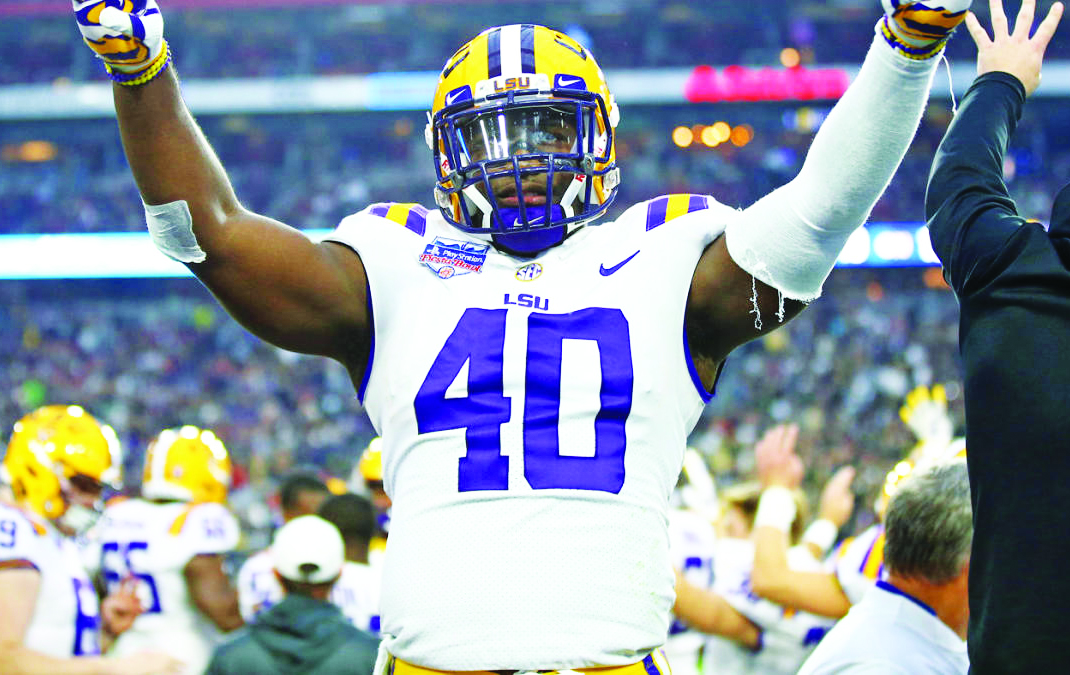 The powerful and speedy LSU linebacker was the fifth pick in the NFL draft on Thursday night, joining a porous defense making the transition to a 3-4 scheme after allowing the second-most points in the NFL last season.

Coach Bruce Arians and general manager Jason Licht selected the 6-foot, 237-pound White over edge pass rusher Josh Allen and tackle Ed Oliver and plan use him, along with veteran Lavonte David, at inside linebacker in the system being installed by defensive coordinator Todd Bowles.

“Coach Todd told me getting you will be like getting a new shiny, pretty car and I’m going to use you and I’m going to drive you to the fullest,” White said. “I’m ready for it. I’ve been put in this situation for a reason. I’m ready to show everybody that I’m the guy for the middle of that defense.”

The Bucs are coming off a 5-11 finish that cost former coach Dirk Koetter his job and haven’t made the playoffs since 2007— the second-longest drought in the league.

White was the first linebacker selected Thursday night and the first Tampa Bay has taken in the first round since Hall of Famer Derrick Brooks was the 28th pick in 1995.

Improving the pass rush is a priority, which would have been one reason to opt for Allen, who had 17 sacks at Kentucky last season.

Licht said White, who converted to linebacker after being recruited to LSU as a running back, is an ideal fit for the Bucs, who lost another former LSU linebacker, Kwon Alexander, to the San Francisco 49ers in free agency this offseason.

“We talked about these guys over and over. We watched every play they’ve ever played in college. and we felt very comfortable that we made the right decision,” Licht said. “Devin’s a linebacker, but he’s also an attacking player, he’s a pressure-type linebacker. He can get to the quarterback as well.”

The GM also raved about White’s leadership qualities and versatility.

“You have linebackers that cover and don’t play the run that great. You have guys who can play the run who can’t cover that great,” Licht said. “He can do both exceptionally well, in addition to blitzing, which is an art itself.”

Licht is also banking on White having an immediate impact on a unit that finished 24th in total defense and allowed 29 points per game last season.

At best, Tampa Bay’s success in the draft has been spotty under Licht, who’s in his sixth year with the team.

Mike Evans (first-round, No. 6 overall in 2014) has developed into one of the NFL’s top receivers, Jameis Winston (No. 1 overall, 2015) still has a chance to prove he’s the team’s long-term solution at quarterback and tight end O.J. Howard (20th, 2017) is coming off a productive — albeit injured-shortened — first two seasons in an offense that ranked among the league’s best in 2018.

But the defense has continued to struggle under Licht’s watch, with Vernon Hargreaves III (cornerback, 11th overall 2016), Noah Spence (edge rusher, second round 2016) and M.J. Stewart and Carlton Davis (cornerbacks, second round 2018) among the young players who’ve yet to contribute significantly.

And that’s not to mention, Roberto Aguayo, the kicker the Bucs traded up to select in the second round three years ago. He was a major disappointment as a rookie and was released after just one season.

The selection of White comes a year after Tampa Bay invested heavily in free agency to revamp the defensive line, bolstered the pass rush by trading for Jason Pierre-Paul and drafted defensive tackle Vita Vea in the first round, No. 12 overall.

Arians and Licht still faces a decision on the future of six-time Pro Bowl tackle Gerald McCoy, who’s due to earn $13 million in 2019.

The 10th-year pro did not participate in this week’s voluntary mini-camp and unless he’s traded, released or agrees to a significant pay cut, his hefty salary will make it difficult to free enough money to sign the club’s draft picks.