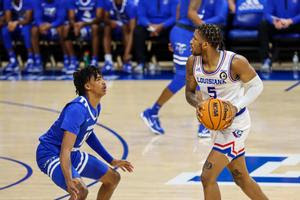 RUSTON — Louisiana Tech could not make it two straight games of overcoming double-digit deficits, falling to a hot-shooting Middle Tennessee by a score of 68-51 on Saturday afternoon inside the Thomas Assembly Center on Karl Malone Court.

LA Tech (11-9, 4-5 C-USA) had one of its worst offensive performances of the season, coughing the ball up 15 times and making just three of its 21 three-point attempts. Meanwhile, MTSU (13-7, 6-3 C-USA) was efficient at all three offensive levels, shooting 52.1 percent from the field while sinking 11 triples (second most this season).

Neither squad produced much offensive through the first seven minutes or so, but after Terran Williams drained his second three-pointer to tie up at 10-10 with 12:32 to go in the first half the Blue Raiders embarked on a 13-0 run to force a timeout by the Bulldogs.

The lead gradually climbed through the stanza, ultimately ending at 43-24 going into halftime.

LA Tech made a pair of 6-0 runs, stretches where Cobe Williams attacked the rim and finished at the rim. However to overcome that big of a deficit, some three-pointers needed to fall and they never did (went 0-8 from beyond the arc in the second half).

The last ditch effort to make a run at a comeback came when Williams scored eight straight points to make it a 60-47 deficit with 5:06 to go. But, it was too little, too late as MTSU countered with an 8-2 run to put the game away.

Williams was the only Bulldog in double figures with 22 points. Elias King, who had 17 off the bench, anchored the Blue Raiders.

“We did not play together today. I thought our problems were on the offensive end of the court. Early in the game, I thought we were playing 1-on-1 basketball. We were not moving the ball, we were not sharing it, which I thought affected our defense. We scored 24 points in the first half. We got down and started hanging our heads. In the second half, I thought our defense was better, holding them to 25 points. But, we dug a hole we could not get out of. We only had three assists and had 15 turnovers. That is not a winning recipe.”