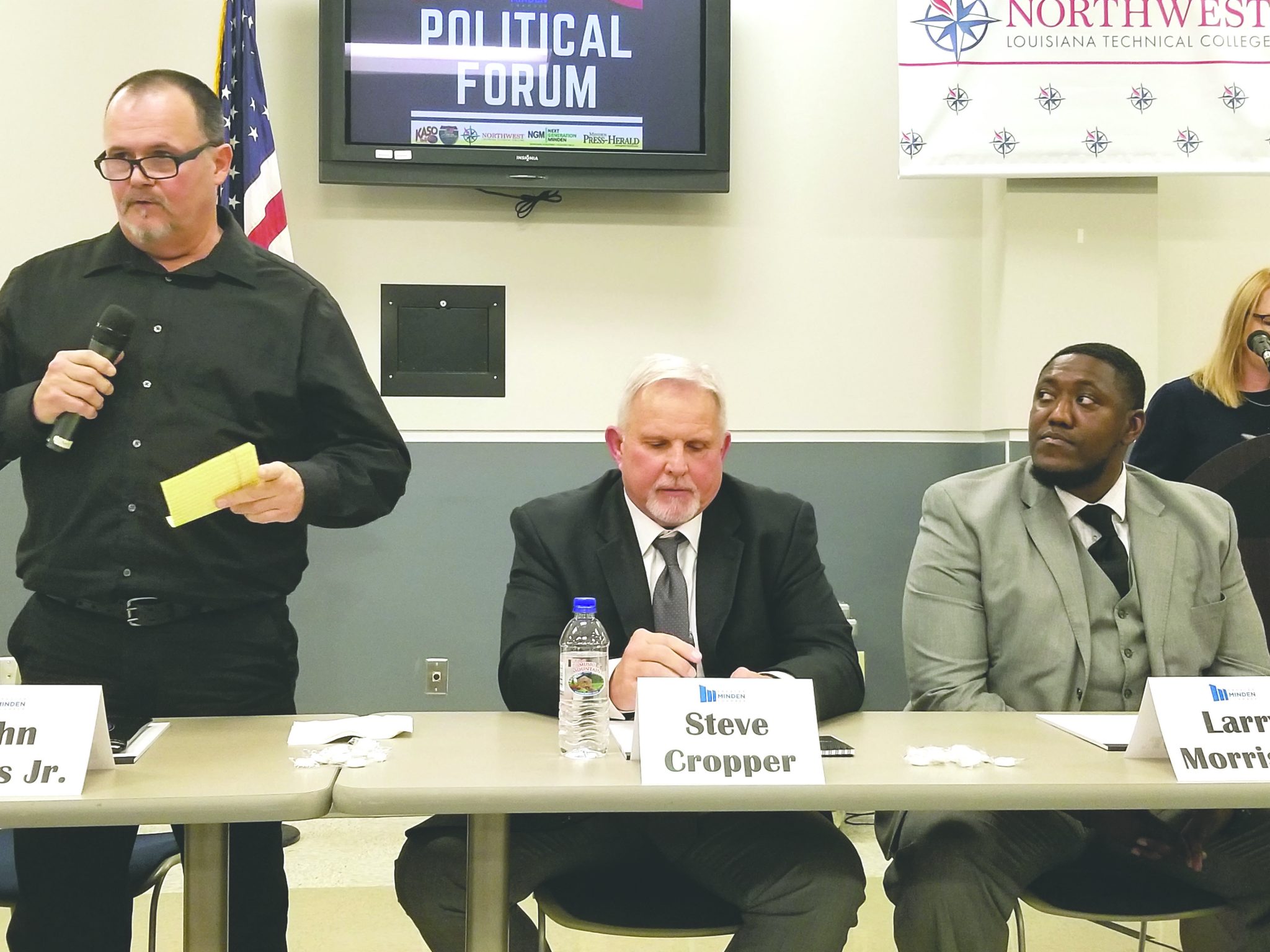 Voters heard from The mayoral, chief of police, and city council candidates.

“You can market your city, you can market anything with social media,” Gardner said, “Let people know that we’re here and we’re open for business.”

“Social media is a big tool and avenue for us to use. It’s not the only one. It takes time, effort, and face to face meetings with people in the business industry section. They have to come find out what Minden is,” Newer said.

Wilson asked the mayoral candidates if they think our Main Street is healthy and successful.

“Yes it is healthy. Yes it is successful. We still have empty buildings,” Newer said, “We need every building full of small businesses. We need to help recruit these businesses owners and help them possibly with grants and ways to be able to come in and do what they need to do with the buildings to open them. With our sales tax being up, our community and our citizens are supporting our businesses and that’s great,” Newer said
Gardner responded to the same question.

“It’s very healthy but we have just touched on what downtown could be. We have all of these businesses downtown that have no development in the upper stories. There are grants available, there are tax incentives available for young people to live in downtown Minden. There’s also grants available for Main Street programs to enhance their downtown, we need to do this as well. We need to reach out to the buildings that are empty. We need to encourage the business owners to either sell these businesses or put businesses in them,” Gardner said.

Both candidates agreed that if they received $1 Million dollars to spend on the city they would use it to improve the roads.

The candidates were asked by Wilson “What is the biggest need of the Minden Police Department now? What will you do to fill that need?”

“Honestly the biggest need is money. My issue over the last eight years has been hiring, training and keeping good officers here in Minden, ” Cropper said, “My goal over the next four years, and it’s been my goal ever since I’ve been here, is to try to get Minden to the point where officers from Haughton, Bossier, Monroe and Ruston want to come to Minden and work here.”

Morris had another take on the issues.

“The need that I’m seeing is, we’re having an increase in violent crimes. The way that I’m going to stop that, like Chief said, we need more officers. We need to make that priority,” Morris said, “We’re in a perfect spot. We have all of these universities around. I want to go into not just universities and give them incentive pay, but also let’s go into these high schools to present to them that law enforcement is not just what you see on TV. This is a career that will let you live here in Minden and stay here in Minden.”

Burns put an emphasis on more money, training, and better communication with residents.

“One thing I would do as chief, once a month, myself, a captain, lieutenant or patrolmen would go to a specific neighborhood, knock on doors, come to your house and talk to you to see if you have any issues I can help you with, the department can help you with or if you have any issues with what you think we’re doing wrong,” Burns said. The second thing would be training. I have a lot of contacts from other departments. If I had to pay for it out of my own pocket, I’d be glad to do it.”

All city council districts had some or all of their candidates in attendance. District E candidates answered the question from Wilson, “How do you plan to involve residents in the decision making process of our city?”

District E candidate Pam Bloxom said she would try to get residents involved in business planning and beautifying Minden.

“The first thing I would do is create a citizens’ advisory committee to help incoming businesses or existing business that want to expand,” Bloxom said, “I’ve noticed that when I’ve been door to door, some of our neighborhoods are starting to look a little bit messy, a little bit ratty. I’d like to have a code compliance commission created where we can enforce rules about mowing your grass, keeping your carport clean and not being just a dumping ground. These two things, which would be committees made up of your neighbors and friends, I think would work beautifully.”

Candidate Michael Fluhr had three ideas on how he’d reach out to residents.

“Number one, social media to reach every resident in town. Number two, additional town hall meetings for the residents in District E to put information out on specific items and hear the residents. Number three, the city would have better political information through the local press. Tell the people, for example what is going on with SWEPCO, what is the problem with levelized billing, and so on,” Fluhr said.

Candidate Bill Mills answered to a goal of inclusion.

“All of our people are important. We need to learn to make all people count, not just the ones that we’re friends with but those that we are willing to reach out to that may not look exactly like us, dress exactly like us, or live in our area,” Mills said, “It seems like there’s a lack of communication because over the last week of door knocking that I’ve done, I’ve had to tell people in District E who the four candidates are that are running for city council.

That’s one thing, I think we have a lot of lack of communication going on. We’ve just got to get people involved.”

The event ended with closing remarks by each candidate and attendees meeting with the candidates one on one. The entire event was streamed via Facebook Live and is available for viewing on the chamber’s Facebook page.