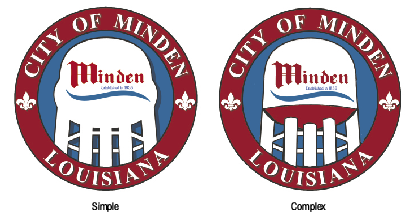 The City of Minden revealed in a post on their Facebook, City of Minden – Making It Work, Monday afternoon that a final decision has been made in regards to the new logo representing the city. the post read, “After we ran a week long poll to decide the design style of the new logo that would represent Minden on social media, we had a very overwhelming response. The winner is…..Complex.”

Based off a poll from their Facebook last week, the City of Minden was deciding between two logos. One being a simple logo of the iconic water tower and the other a more complexed logo. After the poll ended their final decision was the complexed logo to be the new  logo for the city on social media.