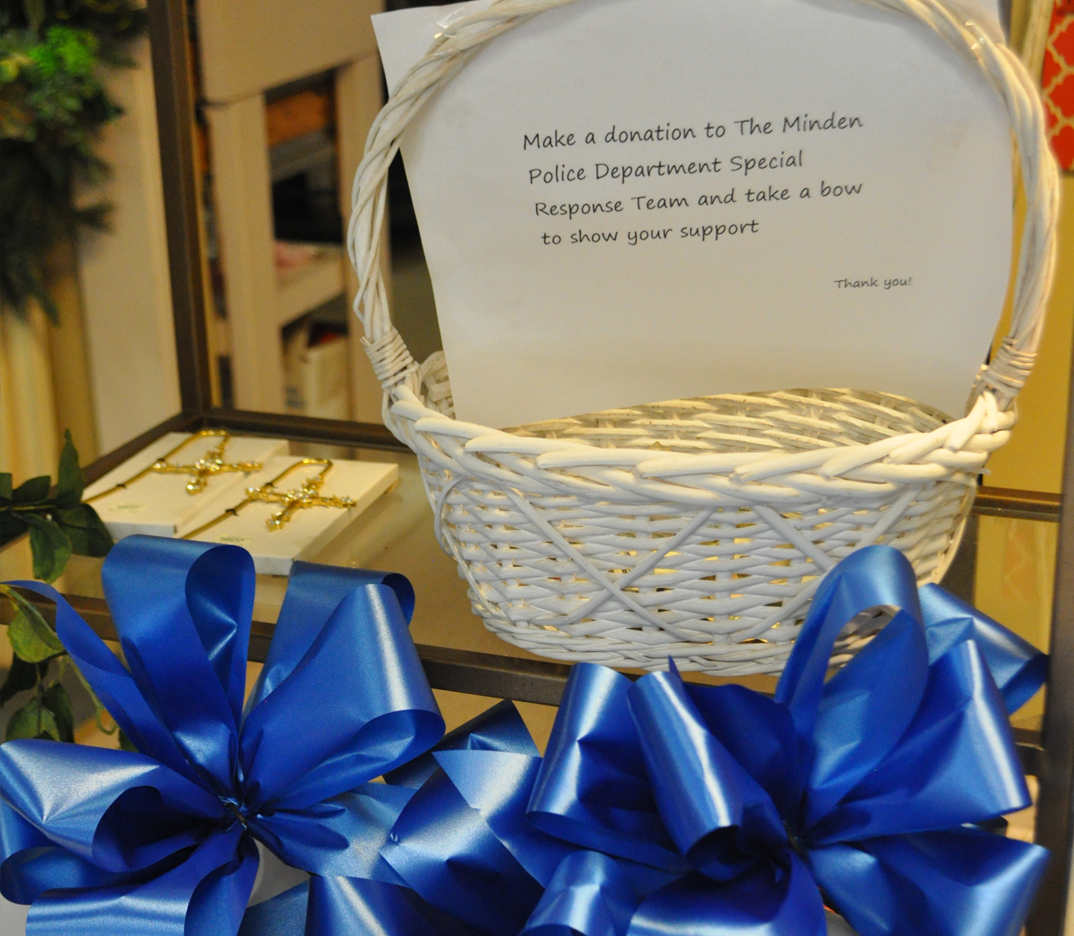 Support for law enforcement is growing in the wake of several officer-involved shootings that have left at least nine police officers dead.

Individuals and companies across Webster Parish are showing their support by delivering food, treats, cards and goodie bags to the police departments.

In Dixie Inn, 8-year-old Drake Puckett delivered gift baskets and goodie bags to the Dixie Inn Police Department to show his support of law enforcement. His father, Danny Puckett, says he is proud of his son and his family supports law enforcement 100 percent.

“We support law enforcement to the fullest,” he said. “I like Drake’s initiative and I’m grateful for the idea of doing that.”

Dixie Inn Police Chief James Edwards says he and his officers appreciate the show of support, and thanks Drake Puckett for his thoughtfulness.

“As chief, I am extremely grateful that even at his young age, Drake felt compelled to want to thank us for what we do,” Edwards said. “His parents definitely did a good job raising him. It makes me happy to see any young person that feels this way towards law enforcement.”

Local businesses are showing their support as well. Ad Sign Service Inc. is giving away stickers and “Back the Blue” decals and others as a way for the company to show its support, employee Teresa Streetman said.

“We’re doing a bunch of different designs for Back the Blue,” she said. “We did some for the deputy here that was killed, so we decided to give these away as a way to show our support for our law enforcement.”

They are still making stickers and decals for anyone who wants one, Streetman said.

Fanette’s Flower House, Sei Bella Foto and House of Flowers are also giving away blue ribbons for citizens to put on every home and every tree to show their support. The idea is to remind citizens to pray for law enforcement nationwide and support their local law enforcement.

“This is in support of the Minden Police Department, and we’re donating the money to their Special Response Team,” Fanette Hodges, owner of Fanette’s Flower House, said.

Anyone who would like to put out a ribbon can go by Fanette’s, make a monetary donation and take a ribbon with them, she said.

Donations given to Sei Bella Foto and House of Flowers will be given to the Springhill Police Department. Bows will also be available at the Springhill-North Webster Chamber of Commerce.

Minden Police Chief Steve Cropper says it makes him feel good to know the community is reaching out to them in this way.

“It’s been overwhelming,” he said. “It started when those officers were shot in Dallas and it’s been almost a continuous thing since then, whether it’s been someone bringing in a dozen donuts or having boxes of pizza delivered, or trays of cookies, cakes, Subway sandwich trays – it’s been almost every day that something has been brought in here.”

He says in light of the officers’ deaths in Dallas and Baton Rouge, he feels people are beginning to see just how dangerous their job really is.

“I think people are starting to realize these guys really do put their lives on the line every day,” he said. “Police officers are killed almost every day, an average of every 50 hours across the United States. For these guys to go out there and put a target on their back and put their lives on the line, it’s a pretty scary thing. They’re all on edge, I’m on edge and when things are going smoothly, it’s easy to get lulled into that ‘everything’s fine,’ and it’s not necessarily fine.”

The chief says officers are taking added precautions to stay as safe as possible.

He thanked everyone who has brought cards, treats or gifts for their show of support.

“It makes you feel good that people are realizing what these guys actually do everyday,” he said. “It’s a real good feeling. I want to thank everyone for what they are doing and showing appreciation for these guys, because it really means a lot to them. It means a lot to me.”