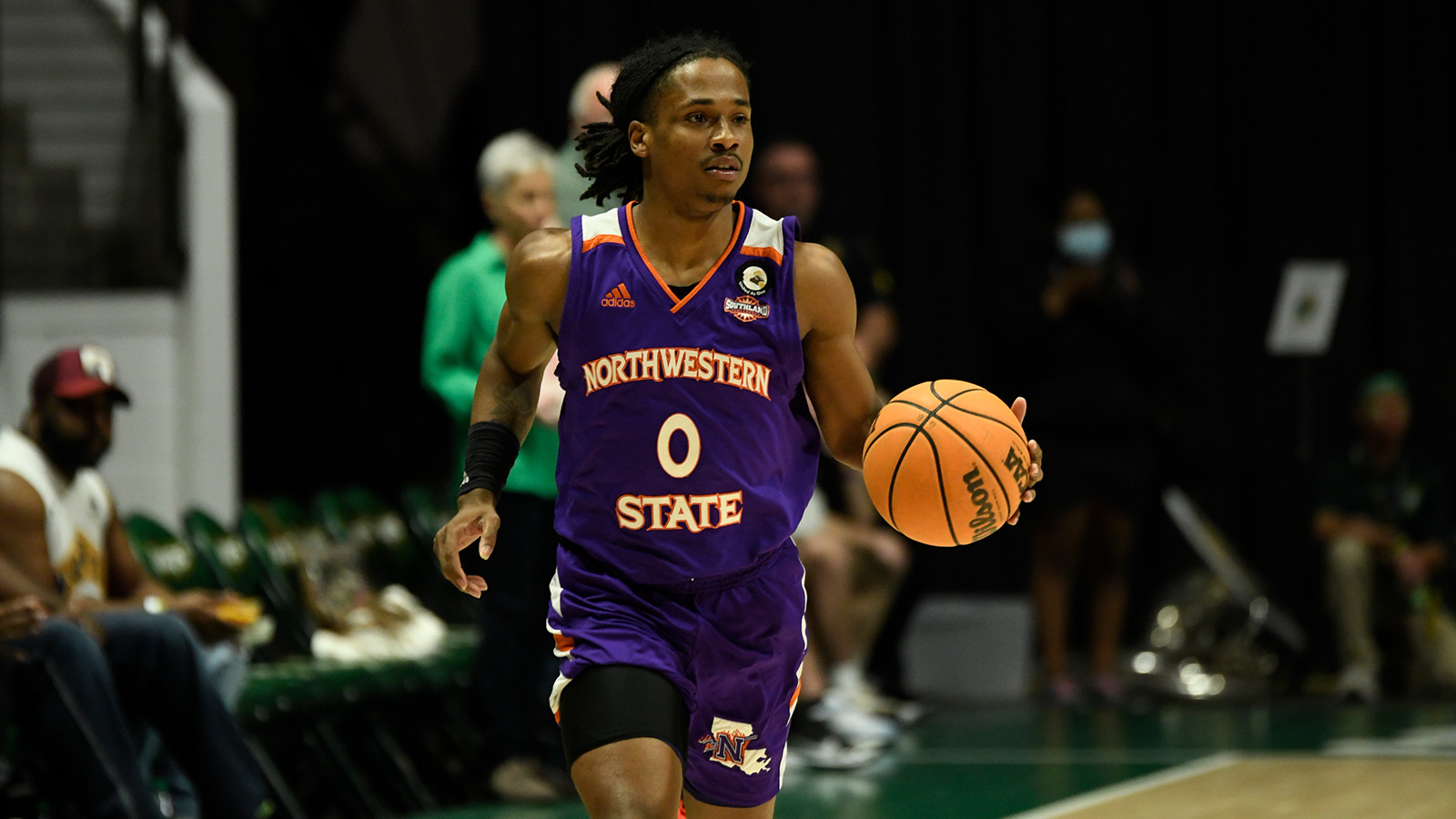 HAMMOND – Despite being down three with 13.5 seconds to play Thursday night at Southeastern, Northwestern State point guard DeMarcus Sharp was eerily calm.

That feeling came over the engine of the Demon team because his Ja’Monta Black stood at the free throw line ready to take three free throws.

“I’m too comfortable with Monta,” Sharp said. “I know Monta practices those and works on them. I knew what time it was.”

Sharp’s faith was rewarded as Black sank all three free throws, forging a tie and setting up the Demons for a 91-81 overtime Southland Conference victory at the University Center.

“Our guys were assignment correct, as we call it,” first-year head coach Corey Gipson said. “They were really talking on defense. When you talk on D, you’re much faster. I don’t know who deserved the winning outcome of this game. I really don’t.

“Southeastern Louisiana plays extremely hard. They are just as impressive in person as they are on film. That coach (David Kiefer) was so complimentary after the game.”

The Demons (11-8, 3-3) saved their best defensive performance for the extra five minutes of play.

Northwestern State held the Lions (10-9, 4-2) to just 1-for-8 shooting in the extra frame with SLU’s lone field goal coming with the Demons ahead by 12. Thursday’s win followed a similar pattern from the Demons’ only other overtime game of the season, a Nov. 25 victory at Central Arkansas in which NSU allowed the first two points of overtime and nothing else.

It also followed a blueprint Gipson laid out earlier in the week – follow an aggressive Sharp to the win column.

Sharp entered Thursday’s game having been more aggressive in the second half of games but had 10 first-half points. Sharp’s scoring buttressed a scorching first-half shooting performance for Ja’Monta Black, who tied his career high with 31 points.

Black sank 6 of 7 3-point tries in the first half as the Demons built a seven-point halftime advantage. Black finished 8-for-13 from 3-point range, giving him 74 3-pointers on the season, a mark that places him seventh on NSU’s single-season list, two behind Sabri Thompson for sixth place and 12 away from equaling Jalan West’s school record.

“Like throwing a penny in the ocean,” Black said of his first half. “I’ve got great teammates. They found me, and they know when I get in a zone like that, they’ll find me and I’ll do the rest.”

Despite Black’s heater of a first half, the Lions did not go quietly, erasing what grew to be a 12-point first-half lead to take their first lead of the game on Roger McFarlane’s corner 3 with 11:30 to play.

That bucket set up a wild final 11-plus minutes that saw all four of the games lead changes happen and the Demons come back from a five-point deficit with 4:12 remaining.

The Demons slipped from 50 percent shooting in the first half to a 37.5-percent mark in the second half but emerged victorious because of contributions up and down the lineup.

Jalen Hampton (16 points, nine rebounds) gave the Demons a third double-figure scorer while Isaac Haney had all eight of his points in the second half. Freshman Greedy Williams played his best overall game in conference play, tying Hampton for the team lead with nine rebounds while dishing out three assists.

Despite drawing his fourth foul with 14:53 to play, Williams did not foul out while tying a career high with 31 minutes played.

“(The coaches) have been harping on me bad about (defending and rebounding),” Williams said. “I feel if I fit that to a T, we can win a lot of games and get back on a run. The past couple of games I’ve fallen short of that. They harped on it all week, and I just came in with the mind-set to defend and rebound and we got the outcome we wanted.”

Sharp finished with 28 points and a game-high seven assists against just one turnover while Nick Caldwell led the Lions with a career-best 25 points and 12 rebounds.

While the Demons’ offense helped forge their way into overtime, it was clear what sealed NSU’s first conference road win of the season.

“You win in overtime with stops,” Black said.

Added Sharp: “We had to get stops. We weren’t getting any stops late in the second half. In overtime, we had to reel it in and be great defensively. It showed.”

The Demons return to action Saturday when they close out a three-game road trip with a matchup at New Orleans. Tipoff is set for 4 p.m. inside Lakefront Arena.