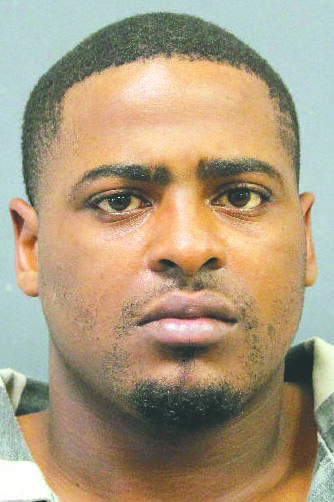 Deotis Germany, 24,  of the 100 block of North Parke Drive in Doyline was arrested for Attempted First Degree Murder of a Peace Officer, Aggravated Flight From an Officer and Four Bench Warrants Monday, January 7 at about 7:50 pm.

Officers were dispatched to a call for a disturbance between a male and female on Sibley Road.

“It was after dark, of course a lot of houses in Minden aren’t marked really well so they were trying to locate the house on Sibley Road where the disturbance was,” Police Chief Steve Cropper said.

“They weren’t sure which house it was,” Cropper said.

Another officer tried to make a stop on the vehicle and Germany refused to stop. A high speed chase took place down Carolina on to East Street then onto Industrial Drive towards Highway 531. The chase then went onto I-20 East, where Germany tried to exit onto Highway 532. As Cropper called officers to call off the chase, Germany lost control of the vehicle and hit an embankment.

There were reportedly illegal narcotics and a weapon in the car which is why Germany fled, according to Cropper.

“Once they wrecked and they got the ambulances there and they were able to get all of the injuries taken care of, a search of the vehicle was made and a firearm was located. Since it happened in the parish, the Sheriff’s office picked up that part of it so I don’t have a list of what illegal narcotics were involved,” Cropper said.

Germany was arrested and transported to Bayou Dorcheat Correctional Center. More charges are expected to come from the Webster Parish Sheriff’s Office.