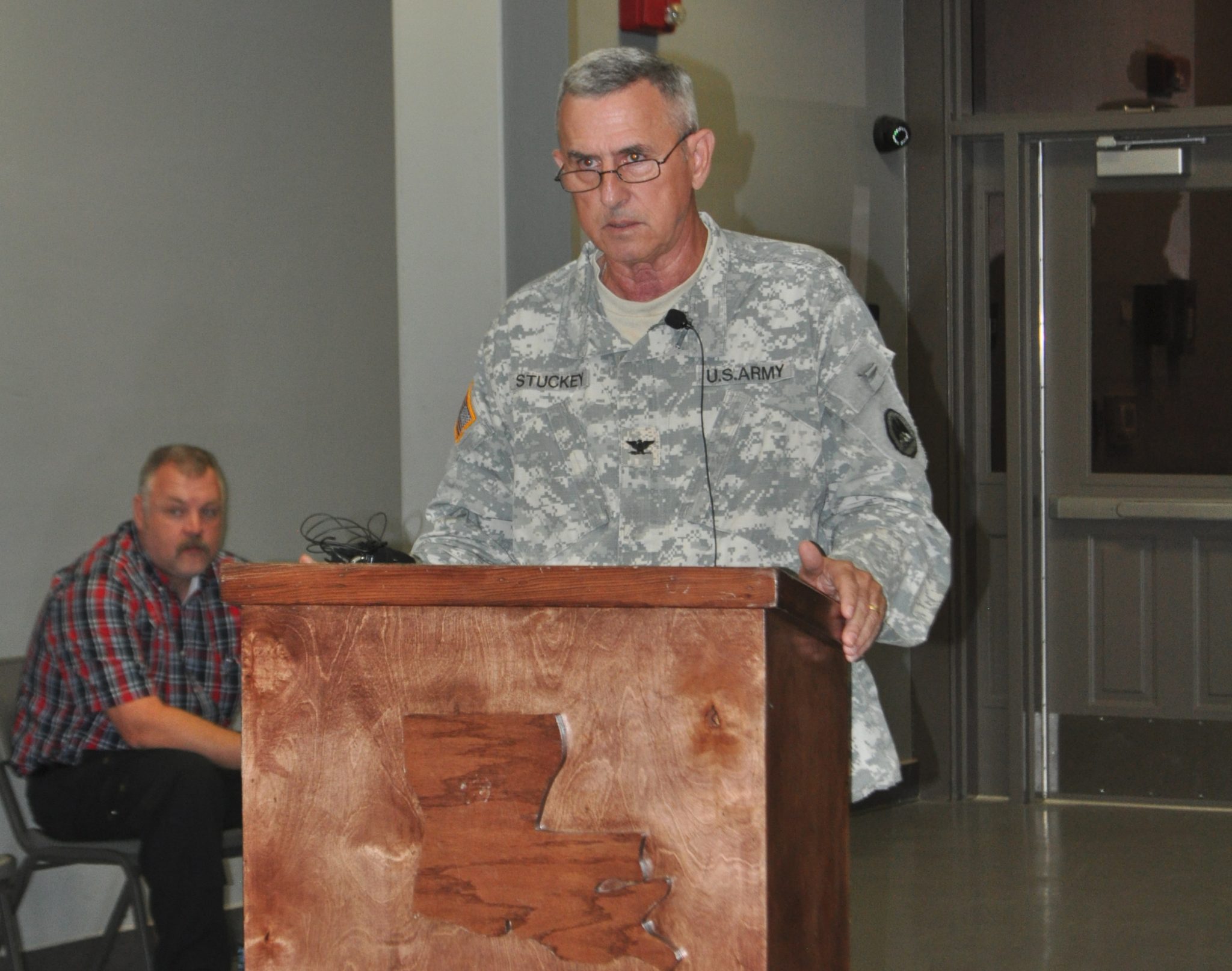 CAMP MINDEN — The Louisiana National Guard has laid out a more detailed plan to rid Camp Minden of the remaining clean burning igniter.

Col. Ron Stuckey, the M6 project coordinator, says after a thorough investigation of the area, the plan is to dispose of materials in three bunkers of the L2 area using “in place disposal.” The controlled detonations will take place beginning as soon as Monday.

“We have no intention of blowing the magazines up,” he said. “The proper terminology is to dispose of the material in place. The EOD will figure out a way to remotely open the doors, then set a charge, or igniter inside the door, and they will remotely ignite the material in the magazine.”

He says their “vision” is the doors will be opened, material ignited, and the gasses and heat will vent out the door.
“If you can imagine a rocket motor lying down, and the rocket motor firing, that’s about what you’ll see,” he said. “It will shoot a flame out the door. The burning of the materials will take place very quickly.”

After each burn, a team will physically go to the site to ensure all material has been properly disposed of, and if not, he says they will take measures to make sure it is properly destroyed.

The material will be disposed of in the early morning hours, when there is the least amount of activity on base, Stuckey said.

During the in place disposal, environmental monitoring and sampling will take place. Adam Adams, Environmental Protection Agency on-site coordinator, says they will test for the chemicals of concern, such as particulates, metals, dioxin/furans and the semi-volatile compounds, the three main chemicals of interest. Monitors will be at all four sites.

Adams says results will be available on the EPA’s website within 30 days.

Ron Hagar, Citizens Advisory Group chair, says while he’s not completely comfortable with this option, it is the only option they have.

“Without water as an option, this is really the only option,” he said, adding they were presented with two choices, either igniting it now or cutting off access and allowing it to go naturally.

“Either way, it’s self-ignite now, or self-ignite later, and doing it now controls it,” he said.

Frances Kelley, who in the beginning helped guide the dialogue committee, says she feels comfortable with the decision, given the direness of the situation.

“They’re doing what has to be done given the dangers of the situation,” she said. “I’m glad the M6 disposal is going on as planned, and I think we’ll all breathe easier when the material is gone and the chamber has been dismantled and taken away.”

“We’re going to try to handle this as quickly as possible,” he said. “It is an imminent situation. The Army Explosive Safety Board didn’t pull any punches with us. We need to destroy this stuff immediately. That area is cordoned off to include all the soldiers and guardsmen, along with ESI and other contractors. We’re going to get after it and get it done, because if we don’t, somewhere in the near future we would have shut down the disposal of the M6, and I for one, do not want to lose a single day in the destruction of that material.”

Officials said several times throughout the meeting that communication with the public will be a priority. They are expected to call another press conference at the completion of the in place disposal.

Rebecca Sherrard, a Citizens Advisory Group member and resident of Doyline, says she appreciates everything everyone has done to help rid Camp Minden of the M6 propellant.

“I would ask that everyone here tonight, when you go home, say a prayer for these guys,” she said. “They deal with this stuff every day. When we go home to our homes, they’ve got to drive around in their vehicles every day. Y’all say a prayer, because this is dangerous. They’re doing everything they can do to make sure the public and our school kids are protected.”